The Stories one Picture Tells

I take a ton of pictures when I’m on vacation.  It is a blessing and a curse of the digital photography age that you don’t have to worry about getting the “best” shot.  You can just take a few hundred pictures and when you get home, you can identify the ten that are actually worth keeping.

My goal is to take pictures that tell good stories.

As I’ve been looking through my pictures of the family trip to Monterey, I’ve especially enjoyed this one: 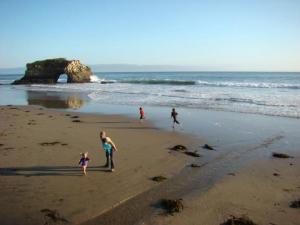 Two boys on a Beach

This picture was taken at Natural Bridges State Park just outside of Santa Cruz, California.  The boys wanted nothing more than the opportunity to take off their shoes and play in the surf.

I like this picture for a lot of reasons.  Even though the boys are pretty far away and their backs are turned, you can sense that they must have enormous grins on their faces.  There is a sense of motion.  You can tell where they came from and where they are headed.

The backdrop of the natural bridge provides a spectacular scenic element and the reflection of that bridge in the surf enhances it.

The lighting was also key, I think.  The long shadows show it was later in the day and the low angle of the sun enhanced the contrast in the shot.

I even like the mother and her daughter in the foreground because it highlights how it wasn’t just my children who were drawn to the water.

All of which is very technical and I’m not a technical photographer.  I took a picture of a moment and I feel like I managed to pick a perfect moment.

A funny story about the boys playing on this beach:

The water was cold and it would be hard to unpack dry clothing so I asked the kids to stay in shallow water and roll up their pant legs.  That worked for a while.

Eventually, though, they got used to the temperature and ventured further.  Not too far, you understand.  Maybe the water would reach 18 inches when a wave came in.  At least at first.

Every time the water would touch Alex’s pants, he would run back towards shore and roll up his pants in a way that would ensure they would unroll the moment he ran back into the surf – at which point the water would touch his pants again.  So in a nearly continuous loop, he would run into the water, get wet and then run back to the sand to roll up his pants.  He did this for nearly every wave.

This was funny for two reasons.  One – he was wearing jeans so the moment water touched the pants, it was all over.

Two – he kept rolling up his pants even though he’d been playing in water that was up to his waist.

One response to “The Stories one Picture Tells”