Hey, I have an idea! Let’s make some gross generalizations about Immigration!

I’ve seen this meme on Facebook a few times and I’ve dismissed it as something I would rather ignore.  I guess that I just finally saw it one too many times and I think that it is time to really parse out what they are saying to understand the point this meme is trying to make. 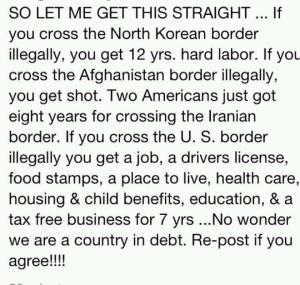 Let’s start with what I must assume this means:

Shooting illegal immigrants is a better solution than allowing them into our country.  I mean, look at what they do in North Korea, Afghanistan and Iran.  Now those are some countries we all want to emulate!

Right?  Isn’t that what this is saying?  The immigrant problem in the U.S. could be solved with a whole shit ton of bullets?

It is also saying something else, though….it is saying that illegal immigrants coming into our country, using our services and taking our jobs is why we have a multi trillion dollar debt.

I didn’t want to go through the hard work of proving why this is the most ridiculous assumption that I can imagine one would make about immigration but I guess I’ll have to because holy crap is it wrong.

Let’s start with the really “basic” question – how much of our country’s debt could realistically be caused by illegal immigrants?  Here’s a pie chart I found on usgovernmentspending.com:

That's a lot of numbers

Let’s just look at what is relevant here, which is the amount of the budget that could be directly impacted by immigrants.  That would be Education, Health Care (sort of – we’ll get to that) and Welfare.

We can assume the other government functions are offered to everyone and immigrants don’t really make those numbers fluctuate by any measurable degree. Defense spending stays the same because the number of illegal immigrants doesn’t impact the number of tanks or MRE’s produced.

Let’s also look at the federal budget deficit for 2011, which was, according to USA Today, 1.3 trillion dollars.

So…according to usgovernmentspending.com, the cost of the three things that are relvant here (Welfare, Health Care and Education) are as follows:

Holy shit!  That is 300 billion dollars more than our federal deficit!  The Immigrants are the problem after all!

Let’s start with Health Care, shall we?  Most of that (over 400 million) is senior health care (Medicare).  In fact, the only part of that budget that conceivably can be used by immigrants (legal and illegal) is Public Health Services (4.7 B).  There is also 323.9 Billion in welfare payments on the books.  I don’t think that is all because of health care for the children of illegal immigrants but let’s assume that it is.

Drilling down on Welfare, we can immediately eliminate 101 Billion for unemployment benefits as illegal immigrants aren’t going to be able to collect those.

I can’t cut anything out of education.

So at this point, the amount we spend is less than our complete deficit.  Whew!

If all of that money was going to illegal immigrants, though, it’d still be a lot of money.

But here’s the thing….it isn’t.

In fact, here is a link to a lengthy article by factcheck.org explaning just how much illegal immigrants cost this country’s welfare system.  The numbers are staggering-ly small.   Especially in comparison to our national debt.

1.3 trillion, my friends, is a gigantic pile of money.

So the idea that immigrants are responsible for our nation’s debt isn’t just wrong – it is laughably wrong.

Now, what about those jobs they have?  They come into our country and they steal our jobs!!!

Really? Do you want to pick strawberries in a field? For $4.00 an hour?

You know what else happend?  The price of watermelons went up.

So…our food was more expensive and tons of food rotted in the fields because we didn’t want to give jobs to illegal immigrants even though those jobs didn’t pay well enough for us to do them.  Also, we don’t want to pick watermelons. By “we,” I mean “almost everyone else in this country.”

All this anti-immigrant rhetoric wastes time and money on a problem that not only isn’t that bad but also provides a whole lot of benefits (like cheaper produce) that we’d like to pretend don’t exist.

So the next time you see this particular meme on Facebook, please remember that nothing is that simple.

And if you honestly believe that shooting illegal aliens is a better solution, you scare the piss out of me.

3 responses to “Hey, I have an idea! Let’s make some gross generalizations about Immigration!”