I shouldn’t read these pages.  Yes, most men are not misogynist pricks who talk down to women at every opportunity but far too many of them are.

Ladies, if I’ve ever said anything this shitty to you, I sincerely apologize.  I’ll try to do better.

I was at a conference outside my field (I am in Women’s Studies), and a male undergraduate came up to me, saw the department name on my tag, and told me, “no offense, but Women’s Studies is a dead field. It’s built on a fundamentally sexist premise, so it was only a matter of time before you killed yourselves.” Thanks?

Hey everyone, rule of etiquette number one: if you ever need to preface what you say with “no offense,” what you are about to say is really fucking offensive.

Michael Brodkorb, who is best known as the staffer who had an affair with Amy Koch, apparently also worked on the Gay Marriage Amendment Minnesotans will be voting on in just a few weeks.

He admits what we already know – that part of the reason it will be on the ballot this fall is to get Conservative voters to the polls.  He doesn’t mention the reason I’ve already discussed – growing support for gay marriage and a shrinking window of opportunity.

Still, how fucking cynical can you get to put an amendment on the ballot to limit the freedom of a minority group just to get your voters to the polls?  If your voters don’t want to come to the polls, how about you put up better candidates?

And stop calling yourself the “family values” party when you are having affairs with staffers.

I wish he’d been against the amendment when he had the ability to keep it off the ballot.

His opposition would have made a great deal more difference then.

It is a thinly veiled attempt to show school children that the gays are just like everyone else.

Good Christian children could end up sitting with atheist children and they might catch tolerance.  Kids who are good at sports might discover that the brainy kids also play video games.  Gays could touch their children and make them gay. 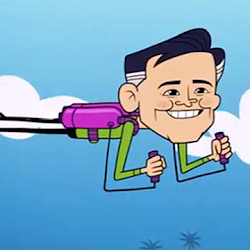 The “gay agenda” is to be allowed to live their lives the same way the rest of us do.  It’s the same thing straight people want but, strangely, nobody ever accuses of us having an agenda.

The story is pretty brutal.  She was raped.  She didn’t report it immediately and tried to forget the experience.  She finally realized that she had to do something about it so she went to the campus’ sexual assault counselor and was told there was really nothing they could do – she should forgive and forget.

Granted these are her words but it sure seems to me like she was in need of help and whenever she turned to someone, they failed her.  Read the whole thing – if you can.  Watch how she was made a victim by the administration for months simply because she admitted that she was having psychological problems dealing with the fact she was raped.  Nobody ever told her that she deserved to be raped.  They did tell her that she was no longer capable of “thinking straight.”

I get it.  I get that without physical evidence, it is her word against his.  The odds of a successful rape conviction are pretty low.

On the other hand, if a student is talking to the sexual assault counselor about how difficult it is to be in the same dorm with the guy who raped her, someone ought to be doing something.  Aside from refusing to let her study abroad and failing to tell her about the decision.

The list of people who failed to do something – anything – decent for this young woman is pretty staggering.

Note: The President of Amhurst has written a response.

He also says that if we react angrily to what he says, it is because we know he’s right.

Now I’m going to guess that when he talks about “women in politics,” he’s really talking about women like Nancy Pelosi. I’ll bet that Michele Bachmann and Sarah Palin are just fine by him.

If you follow the link, you will see the writer provided a pretty thorough takedown of the Biblical verse in question.  Oh my gosh!  The bible is open to multiple interpretations and this jerk might have gotten it wrong? Oh, and his quote is from Paul.  I continue to be confused as to why so many Christians use Paul to support their arguments.

I don’t presume to speak for Jesus but let me just say this: if Jesus is really the son of god and he has been paying any attention to the job men have been doing at running women’s lives for the last 2000 years, he’s probably already noticed that we’ve blown the opportunity to claim we’re any good at it.

I’ve seen a couple of folks mention it but here’s the really important thing about the binder of women comment.  Romney and Obama were asked the following question:

In what new ways to you intend to rectify the inequalities in the workplace, specifically regarding females making only 72 percent of what their male counterparts earn?

Romney then went on to talk about binders full of women.  And while the story wasn’t exactly true, the fact is, he never actually answered the question.

Look at the binder full of wookiees!

What is he going to do to reduce pay inequality in the workplace?  If his answer is to be taken at face value, the answer is not a god damned thing.

Chris Kluwe Gets to Debate an Empty Chair

Kluwe has been outspoken in his opposition to the Straight Marriage amendment (I think we should call it a straight marriage amendment because that is what it is trying to “protect”).  He has offered to debate any one of several individuals who support the amendment.

Every one of them has failed to respond.

Really folks?  You are pushing this amendment but when one of your most vocal and intelligent opponents challenges you to a debate, you won’t step up and defend your position?  Against a punter?

I mean sure, he’s a punter that has offered the most cogent and complete responses to your arguments but really?  You’re scared of a punter?

Come on Michele Bachman! I know your husband would love to watch you debate this guy!

You should be.  He’ll pants you.

But you still ought to have the guts to show up.

Maybe everyone is overreacting on this one.  Maybe this guy, who has called homosexuality a “sexual disorder,” will be able to help a district with a history of discrimination and bullying improve in that department.  Maybe he’ll leave his biases at the door and do what is right for every child and not just the straight ones.

His history would suggest otherwise.

The people saying that homosexuals are “broken” are engaging in bullying behaviors already. How is someone who is an unrepentant bully going to help stop bullying?

I dig most of Peter Hollins’ song “Some Nights.”  The a-capella harmonies at the opening of the tune draw me right in.  I love the driving drum beat below the melody.  I would totally love to have The Dregs cover the shit out of this song.

And then at the end there is this horrible autotuned section.  What the fuck is it doing there?  If Hollins couldn’t hit the notes, why the hell did someone decide the song would sound good if they wrenched his voice around?

The guy has a great, clear voice and the song itself didn’t need the newest musical technology to work.  In fact, it feels like whoever was engineering the song resented how good the song sounded and wanted to throw in something that would ensure the most memorable part was as awful as possible.

I blame all of this on Cher.