Stories from a Fearless week of Fearlessness

This entry is going to be pretty long because the last week was a pretty massively amazing week and even though I’m just trying to sum all of it up, there is a lot to sum up.

That is quite possibly true.  Fortunately, when I tossed the idea at a bunch of other yahoos I knew, their initial response was not to laugh at me and tell me that I was a crazy person. Instead, they told me they liked the idea and that they wanted to help.  Still sounds pretty casual, doesn’t it?

Well, no matter how casually you say it, at some point, you have to start working.  We’ve spent a lot of time talking about it.  Last Saturday, we made it happen.  A theatre company in theory became a theatre company in practice.  The results are spilled all over the web. Just a few examples:

Joseph Scrimshaw recorded an episode of his OBSESSED podcast at the party and you can totally listen to it on the internet.

My Geeks Without God compatriots and I also recorded a podcast at the event and the results were broadcast across the internet last week.

Jena Young and I also sat down with Joshua Humphrey backstage to record an episode of his TC Theatre Podcast.

The St. Paul Pioneer Press even had an article about the launch and an interview with me!

And my friend Peter Verrant took an awful lot of pictures.  Here’s a few of my favorites.  There are a lot more on the internet.  Ah the internet!  Is there nothing it can’t do? 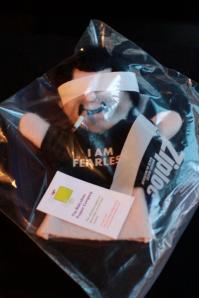 At our silent auction, we had a fearless Frank puppet up for bid. I wanted Frank and I wanted him bad. Unfortunately, I lost the bidding war. Frank will live on only in my memory. And on all of our merchandise… 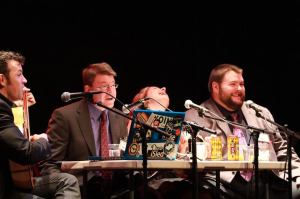 This is the precise moment where Geoffrey and I delivered the punchline from the new verse to the Geeks Without God Theme song. Nick and Molly were kind enough to laugh. Perhaps they were faking.  I don’t care 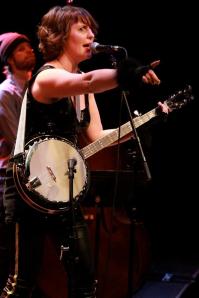 Courtney McLean and the Durty Curls were hilarious, of course. One of Courtney’s better facial expressions is captured here.  Someone in the audience had, apparently, been very bad indeed. 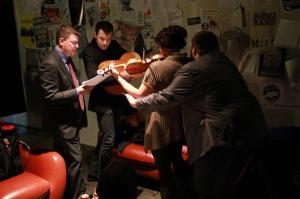 Geoffrey, Molly and I were practicing a song called “Radio is a Moribund Art Form.” It’s very sad. So Nick decided to loosen Molly up a little bit. Liquor + Comedians = Sexual harassment lawsuits! 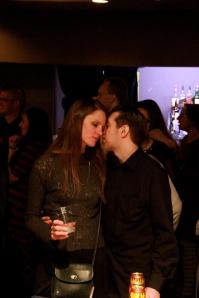 It is a well kept secret in the Minnesota comedy scene but Joseph Scrimshaw and his wife Sara are actually quite fond of one another. 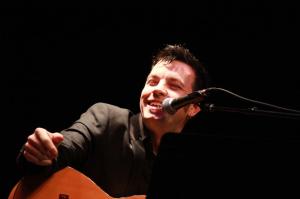 My writing partner and band mate Geoffrey Brown is enjoying the moment. 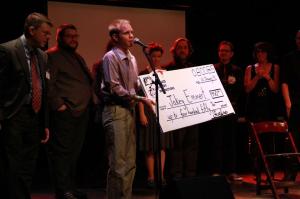 We awarded Jakey Emmert a giant check signifying his selection as our Fearless Fringe sponsorship winner. Now my obituary can officially read “he gave a giant check to a small gay man.” 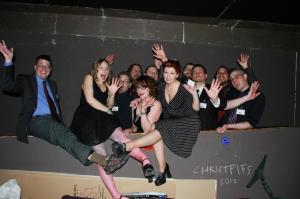 Almost all of the founding members of Fearless. Chrys had the flu and chose not to go. This was a very popular decision with the audience. 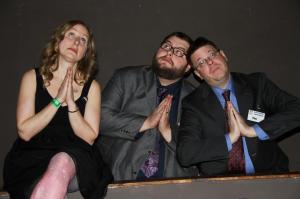 Molly, Nick and I attempt to trick god into thinking we are pious as hell. We know god isn’t fooled! Because we don’t think he exists.

So hopefully those pictures indicate we were having a lot of fun.  Fun is awesome but it doesn’t pay the bills.  Even if what you are doing to pay the bills is comedy.  This was a fundraiser.  The whole idea was to raise funds.

And we did raise funds.  A lot more than we expected, honestly.  We have over half of our first year operating budget.  By just about any measure, we made it possible to pay the bills.

A lot of people made it really clear they liked what we were want to do.

Here’s the truth of it: launching a theatre company is easy.  All you have to do is put on a good show.  If you’re any good, people will come.  The trick is delivering on what you promised.

That was what the rest of the week was all about.

I took to calling it the Fearless Week of Fearlessness.  Which is pretty lame.  I liked it, though.  I said it a lot in hopes that it would catch on.  It didn’t.

Once you launch the company, you have to do something with it.

So during the next week, we started doing something with it.

Monday’s task was easy enough.  We fielded a team for the Minnesota Fringe Trivia Contest because if you want to be taken seriously, you need to kick the butts of other theatre people in town.  It isn’t about having them take you seriously.  No, it’s about winning.

And win we did.  Crushed the competition from opening gate to the finish line.

For the rest of the week, I did my job as artistic director by finally nailing down a start date for the last title in our initial slate of shows – Young & Fearless.  For those keeping score at home, that means Fearless will be launching three “resident” shows (Young & Fearless, Big Fun Radio Funtime and the Unhinged Variety Hour) as well as doing two collaborative shows between now and the end of April.

Then on Friday it was time to actually do a show.

Fearless has a lot of partners and that is part of what we are trying to do as a company.  On Friday we were launching our first “resident” Fearless production.  I’m not saying that the entire fate of the company was riding on the success of one show but I wanted it to go well.  It was my idea, after all.

Big Fun Radio Funtime is something I’ve wanted to do for a long time – even if I had no idea how I was going to do it.  Being Fearless isn’t always about doing something nobody else has ever done before.  It’s about doing something you’ve  never done before.  So instead of taking the time to figure out how to do everything before I scheduled a show, I scheduled a show and proceeded to start figuring out how to do everything.

Not everything, actually.  Not even close.  I figured how to do parts of it.  Which isn’t bad when you start out knowing next to nothing.

But in the lead up to that show, we were A-listed in the City Pages and I was contacted by KFAI because they wanted to know if they could have a recording of the show to re-broadcast.

And then on Friday we put on a show.  I had solid scripts and performers and fortunately some people showed up to watch.

Was it perfect?  No.  Was it a success?  Absolutely.  And it was a beginning. Maybe even more of a beginning than a big party where we asked for money.

So for our Fearless Week of Fearlessness (I know – lame), we successfully launched our company and then we took it out for a test drive.  And we also won a trivia contest.

It was an amazing week.  One of those weeks you should try to remember because they are very rare.  It was a week that started with a lot of promise and ended with promise fulfilled.  That’s kind of cool, isn’t it?  Even if I gave it a lame name.

This is going to be a lot of work but for one week, all the work was worth it.  We officially transformed from an idea to a thing.  A big, messy, complicated, funny, exciting thing.

So to close this super long brag of a blog post, I’ll include a few pictures from the inaugural performance of Big Fun Radio Funtime, once again by Peter Verrant. 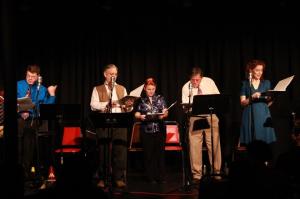 Most of the cast reading something that was, I’m sure, very very funny. Or at least interesting.

I couldn’t guess what was going on with Windy at this point but it is now on the internet forever. Way to go Windy! 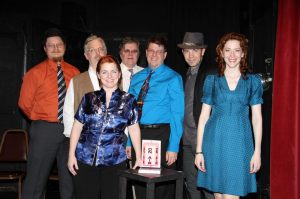 Salsa with his sound effects table. He made noises! 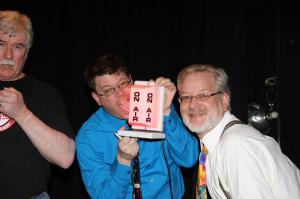 And finally, I picture in which I am licking a prop. I lick a lot of props. It’s this thing I do. I know I should talk to someone about it.