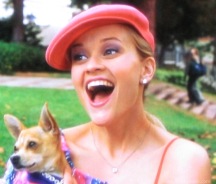 Some movies are so surprisingly good, you believe that the sequel simply can’t help but be good as well.  In spite of all evidence that most sequels are not as good as the original movie, you simply feel that the charm of the original film will rub off on what is, at heart, an attempt to squeeze more cash out of a popular film.

One has to understand that nobody makes Friday the 13th, Part 34 thinking that they are about to add some heretofore missing depth to the franchise.  They do it because they believe they will make more money off a stuntman in a hockey mask and a couple of oil barrels full of fake blood.

So when Legally Blonde II turned out to be a nearly unwatchable piece of trash, nobody should be surprised.  As much as we might have thought that the artistic integrity of the original film would not be compromised, we all should have known that in all likelihood, Elle was going to have to screw shit up again before we were once again shown that she wasn’t just a pretty face.  She was a bright young lady and a gifted legal mind.

I mean, we thought that at the end of the last movie but hey, that was law school.  Being a real lawyer is totally different so it makes perfect sense the same thing would happen to the same girl.  Two steps forward, one step back.  Right?

But the thing is, nobody expected Legally Blonde to be any good.  Given how shockingly entertaining the film turned out to be, our hopes were raised for the inevitable sequel.  We figured if Hollywood could stumble into one surprisingly entertaining movie, they could do it again with the same movie.

Here’s where my cynicism catches hold because I think the basic problem that Hollywood has with creating truly imaginative sequels to surprise hits is that they don’t have the slightest idea what made the movie a hit in the first place.

If they did, they would make them all the time.  Every movie that they turned out would be  a smash.  Or at least an interesting failure.

Instead, they turn out a whole lot of stuff that is kinda bad to kinda good and they are as shocked as anybody else when a movie does better than expected.  They stand around and scratch their heads and try to figure out the magic formula that will earn them their next million.

Do you think anyone in the movie industry has the slightest idea why My Big Fat Greek Wedding made so much money? Well – anyone in a position to make the decisions that would result in a repeat of that success?

None of us should be surprised by the awful sequels that get churned out in the wake of these movies because the inevitable reaction to the popularity of films like Legally Blonde is something to the effect of: “Hey! Legally Blonde was very successful!  Let’s make more movies about attractive young women wearing designer clothes!”

And then we get Legally Blonde II, Confessions of a Shopaholic and The Devil Wears Prada.

Two of which were  not awful movies, mind you.  But not one of them got made into a Broadway Musical.