I’m not going to make my outrage just about Islam – although it is clearly a strict religious society that brought about the death of a woman for what amounts to a charge of witchcraft.

Instead, I’m going to be upset about the arbitrary nature of the death penalty.  Everyone seems to assume that they have the One True knowledge of what makes it OK for the state to kill a person but the fact is you cannot fairly administer such a punishment.

When someone is beheaded for being a witch, we all cringe because it’s awful.  Except in Saudi Arabia it isn’t awful.  It’s totally legal.

Religion is the engine that drives that kind of thinking in Saudi Arabia.  When you take religion out of the equation, you don’t kill someone for imagined crimes.  We certainly don’t do that in America.

Before we get too smug about it, we kill people for imagined crimes all the time.  Why else would one person end up in jail for life and another end up on death row for the same crime? It is because of arbitrary decisions that have nothing to do with reality and everything to do with which crime we imagine was worse.

Fortunately, we don’t kill people for being witches.

Baffling Responses to the Oscars

I’m not going to get into the question of whether or not the “We Saw Your Boobs Song” was ragingly sexist (of course it was) or a failed satire (sure seemed to be).  Here’s the thing, though, everybody keeps talking about how embarrassed the actresses looked and how horrible it must have been for them.

Well, it may have been horrible but was I the only person who noticed that their reactions were pre-taped?  Here I am, a heterosexual male, and I totally caught that Charlize Theron and Jennifer Lawrence were in completely different dresses in their reaction shots than the ones they were, you know, actually wearing.

Now, perhaps they were genuinely embarrassed by the song.  But we don’t know that because we didn’t see their genuine reactions.  We saw pre-taped reactions because they were in on the joke.

And then, somehow, Theron got over being pissed in time to change clothes for her dance number. Because she’s an actress!

Then there was the scathing critique that said Seth McFarlane wasn’t funny, couldn’t sing and couldn’t dance.

Um….bullshit.  His comedy and dancing may not have been to everyone’s taste but he sure as hell could sing. He may not have been Dame Shrley Bassey (not even Adele was Dame Shirley Bassey) but he has a great voice and anyone who says differently is probably qualified to vote for Best Song next year.

Because the people who vote for best song have no fucking taste.

Hey, speaking of Sharia Law, how about a 15 Year Old Girl Getting 100 Lashes for Fornicating?

In Maldives, the court says their “hands are tied” after sentencing a 15-year-old girl to 100 lashes and 8 months house arrest for having consensual sex outside of marriage.  That’s just what the law requires.

Well, pardon my French but that is a fucked up law.

Reading further in the article, we learn that the lashings are “largely ceremonial” and they don’t hurt that much.  Uh…okay….then why the fuck are you doing it at all?  It’s like sentencing someone to jail time and then just showing them the jail and saying “boy wouldn’t it suck to spend time in there?”

Except you aren’t really.  Because you are still whipping them – even if it doesn’t hurt that much.

My point here is that they are already aware this punishment is extremely unfair and cruel.  They are so aware of this fact that they do their best to ensure the punishment isn’t that bad.  Except, you know, psychologically.  But who gives a shit about psychological torture, anyway?  That barely counts as torture!

The logical next step would be to cut it the fuck out all together, wouldn’t it?

Legislator in Texas Wants the Ten Commandments in all the Schools

His resolution reads in part:

RESOLVED, That the 83rd Legislature of the State of Texas hereby support prayers, including the use of the word “God,” at public gatherings as well as displays of the Ten Commandments in public educational institutions and other government buildings.

That’s great and all but it’s unconstitutional to have a religious display in a public school or government building so they can support those sorts of things all they want.  They just can’t actually do anything about it.

I don’t honestly understand why church isn’t enough.  If you are sending your kids to church every week, aren’t they getting enough hot ten commandment action?  You can put a plaque up in your home, too.

If only there was some mass repository of knowledge with pictures of the ten commandments that I could print off and provide to my children free of charge!

In fact, the only place you can’t have a plaque with the ten commandments on it is in a public school.

How about you stick them on your kids notebooks or something if you are so fucking concerned they’ll forget ’em?  Do you think having the ten commandments on the wall in schools will stop food fights?  Will it stop bullying?  Will it stop plagiarism and bad grades?

I’m pretty sure the only thing it will stop is creating an environment where non-Christian students feel welcome.

And we can’t have that, can we?

I came across this one via Twitter.  It is a perfect example of an atheist failing to make a good point: 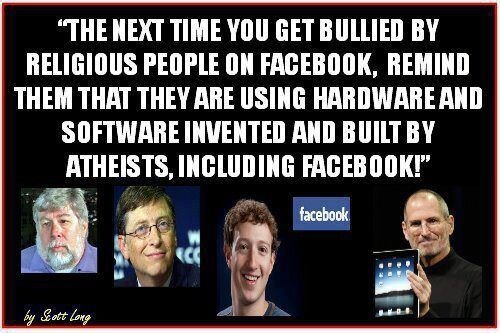 So uh…OK.  It’s great that there are so many out atheists making important (if you can call Facebook “important”) contributions to society but are we suggesting that Christians/Jews/Muslims/Hindus/Pagans have not made important contributions?

It seems overly smug to snark at the religious about all the stuff we atheists have accomplished when our examples include a guy who gave us Windows Vista.

The point that should be made is that atheists are making contributions to a moral society and we are capable of being good and productive without a god. We want to eliminate the stigma that is associated with atheism.

You don’t do that by ignoring the contributions of anyone with religion or pretending that they aren’t as important as the iPod.  Honestly, when you do that, you look kind of dumb.

Sequester hits so the Government…goes home for the Weekend

You would think that if they can’t solve this problem in a regular work week, they’d stick around and try to figure it out.  Isn’t that what we elected them to do?  Are a whole bunch of them Catholics who decided to give up doing their jobs on Fridays?

I mean, I know they all have kids and families and they want to get out to see a Civil War battle site or check out the Washington Monument.  Who can blame them?  The area around D.C. is pretty cool.

Here at Gettysburg, kids, thousands of Americans died so your dad wouldn’t have to do his job this weekend! God bless America!

I just wonder if they could maybe wait to do all that stuff until after they did their job?  I mean, since almost every government employee except them is going to have a pay cut and all….

Michele Bachmann Votes Against the Violence Against Women Act

Michele, I really want to stop disliking you so intently.  It’s exhausting.  Every time I think you can’t say or do something more horrible than something you’ve already said or done, you prove me wrong.

This week, Michele voted against the Violence Against Women act because it protects LGBT victims and allowed Tribal courts more latitude in prosecuting not Native American abusers.

Let’s be honest here – Michele’s big issue was probably with the LGBT part of the bill.  Because she’s on record as having a big problem with gay people.

So much of a problem, in fact, that she’d rather cast a statement vote against a piece of legislation meant to protect victims of abuse than go on record supporting it.

I’m going out on a limb here but if she has so much of a problem with gay people, maybe she shouldn’t have married one….

I’m sorry…that was way too easy.