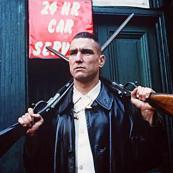 It isn’t often that I watch movies in English with subtitles.  The accent needs to be pretty thick for me to give up on my own powers of comprehension.

I don’t actually need to watch Lock, Stock and Two Smoking Barrels with subtitles.  Not anymore.  Those first couple of times watching the film were pretty challenging, though.

I don’t know what to make of Guy Ritchie, honestly.  This film and Snatch are an awful lot of fun.  I like his Sherlock Holmes films.  But I just don’t feel like he produces great movies.  Fun movies, sure, but fairly slight.

Nobody is going to accuse him of producing the greatest Sherlock Holmes ever, for instance.  I really enjoy both of his Holmes films but I’ve spent a lot more time re-watching “Sherlock.”

Lock, Stock and Two Smoking Barrels is a breakout film for him and it has a Tarantino vibe to it.  Lots of violence.  Lots of clever dialogue.

The story itself is pretty slight.  Which is fine, I guess.  But his stories continue to be slight.  Where Tarantino is always swinging for the fences, Ritchie is content with a ground rule double.

Someone, I imagine, will object and insist that this movie is fantastic.  I actually enjoy the hell out of the movie.  There aren’t really any major flaws.

If this was the only movie Ritchie made that felt slight, I wouldn’t have a problem.  I’m not objecting to this movie so much as I am questioning why Ritchie never seems to stretch himself.

I suppose he doesn’t have to.  Why would Michael Bay stop making movies with shit tons of explosions in them?  He makes gigantic piles of money doing so.

Ritchie is in the same boat.  Nobody is pushing him to make movies with nuanced character development.  As long as he makes stuff that is entertaining and crowd pleasing, he doesn’t have to.

And there are lots of directors out there who could have made a couple of truly awful Sherlock Holmes films.  What if they’d thrown the franchise at McG, for instance?  Same cast.  Directed by McG.

If that doesn’t make you shudder, you haven’t seen many films by McG.

That’s a good thing, by the way.  That’s a very good thing.

It feels a little bit like Ritchie likes the plot more than the story.  He loves moving around all the convoluted pieces in Lock, Stock.  He enjoys the convoluted game.  The characters are secondary.

The thing is, I want him to swing for the fences just once (he was not swinging for the fences in Swept Away).  I feel like the guy has a truly spectacular film in him and while he’s produced a lot of really enjoyable movies, he could produce something greater.

I’d even be OK if I had to watch it with subtitles.