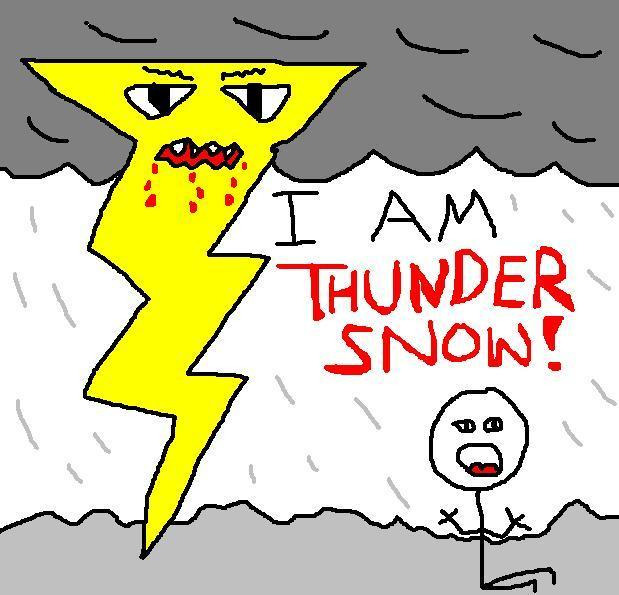 By the time those winds reach Minnesota, they are so strong that they uproot trees, turn over cars and throw people around like ping pong balls in one of those lottery things that blow ping pong balls all over the place.  They are invisible scythes of death that live on oak trees, trailer parks and human flesh.

Also, when all that snow thaws, it has to go someplace because the ground is still frozen solid.  That’s what flood plains are for.  Too bad the majority of the southern third of Minnesota is a flood plain.

I go to a restaurant in Shakopee that is right on the edge of the Minnesota River.  A few years back, the river was so high that the basement flooded to within a few feet of the ceiling.  You could stand at the landing and look down the stairs at the lake in the basement.  There were catfish.

I’m not making that up.  There were catfish.

If your house survives the straight line winds and flooding, you get the Minnesota summer, which can range from a comparatively pleasant 80 degrees with high humidity to a soul crushing 188 degrees.  With high humidity.  It feels like you climbed into a hot tub fully clothed and someone dumped five billion mosquitos in there.

If you somehow survive the heat and malaria, you finally arrive at fall.

It lasts for about two weeks.

Winter hits somewhere around November 2nd.  Most of us will brag about the Halloween snowstorm of ’91, though, just to scare transplants.  Because they should be scared.

Early in the season you will probably get some freezing rain.  Freezing rain turns the freeways into skating rinks but nobody is wearing any skates and it wouldn’t matter if they did because they completely forgot how to skate in the four months since the last time they went skating.

Somewhere in the weather labs, where weather scientists look to devise new and interesting ways to kill living things, they came up with a great idea.

Thundersnow combines the crushing weight of three feet of snow with the potential of being electrocuted.  It’s like a severe winter storm combined with a severe summer storm that has been possessed by the demon child of Satan and Mr. T.

First you get rain.  It falls for a while and could even be considered pleasant if it weren’t 30 degrees outside.

Then the snow starts falling at the rate of about six inches per hour.  Small children are encouraged to carry tracking devices when they are forced to take out the trash by parents who would rather lose a child than leave the house themselves.

The snow is mixed with rain.  This, somehow, causes static electricity (or something – the science is not important) and that causes lightning.

The lightning knocks out transformers so nobody has any heat.  Also, there is thunder.  That frightens all small children, who have to sleep with their parents so not a single adult with a child gets any rest that night (thundersnow always happens at night because it is scarier).  Given Thundersnow is specifically designed to shut down schools (you never get thundersnow on a weekend), that means these same sleep deprived parents will have to stay home with their kids the next day.

The snow continues to fall and the temperature drops from 30 degrees to 98 below zero.  All the water that was on the streets freezes.  Why was the water still on the street?  Because it’s the middle of winter and the sewers are blocked by a wall of plowed snow.

The storm ends, the sun comes up and everyone tries to drive to work.  Or stays home with their manic children.

Thundersnow is our punishment for living in a region that doesn’t have earthquakes or hurricanes.

The weather is trying to kill us.  How do we fight back?

The Polar Bear Plunge.  What the hell is wrong with us?

P.S: Fearless Comedy is sponsoring a team of Polar Bear Plungers this year because they will not allow the weather to kill them.  Please pledge to support the Special Olympics!

One response to “Thundersnow”