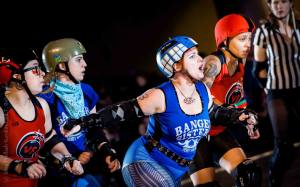 I’ve known Windy more than half my life, I think.  We met at the Renaissance Festival, helped form  CONvergence, and have recently done a lot of theatrical collaborations. She is brash and self confident and filled with nearly limitless energy.

Windy and I are very similar and that means we’ve had some epic arguments over the years.  It is a testament to our friendship that we have consistently managed to remain friends in spite of those arguments.  Because I’m not kidding – they have been epic.

She is someone who is tenacious and will fight with all her might to achieve that which she has set out to do.  Be it teaching, roller derby, dancing, singing, costuming, or being a mom, she doesn’t do things halfway.  She jumps in with both feet and dares the cosmos to make her fail.

If you know Windy, you know that the cosmos would run and cower in the corner rather than cross her.

Her passion for life and for the things she does are always fun to watch.  She’ll drag others along by sheer force of will.  I’ve seen her come up with some crazy ideas and my typical response is “if anyone can make this happen, Windy can.”

And you know what?  She always makes it happen.

If she’s afraid of failure, she never lets it show.  Instead, she will focus her considerable talents on figuring out a way to get it done.  If she does fail, she will never fail the same way again.

She also does an amazing Captain Kirk impression.  I’m pretty sure Shatner himself would be impressed.

I’m pleased to have been able to call Windy a friend for so many years.

Windy doesn’t have a blog but you should definitely follow her on Twitter and listen to her podcast, Xanadu Cinema Pleasure Dome.