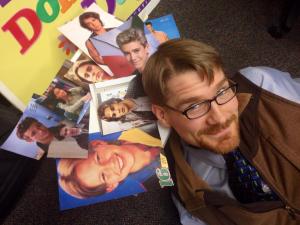 What constantly impresses me about Levi is how positive he is about everything.  The Friend a Day blog posts, which I borrowed from him, were all about saying great things about people in his life.  The internet can frequently be a very negative place and having someone making an effort to actively fight that negativity is refreshing.

Levi is a very talented writer and producer.  The shows he produces with Comedy Suitcase (along with Joshua English Scrimshaw) have long been favorites of my kids.  There have even been some tears when we arrived at a show too late to purchase tickets.

Not your fault, Levi.  You can’t help it if what you produce is so good everyone wants to see it.

In a theater market that is as rich as the Twin Cities, it is great to see Levi and Joshua working so hard to produce comedy that is targeted towards families.  I think that has helped inspire me to explore more scripts that my kids could actually watch.

He’s a very devoted dad and that has helped inspire his podcast, Pratfalls of Parenting, a podcast featuring performers who are also parents.  He is a gifted interviewer who helps bring out the best in all of his guests.

Watching Levi on stage is a genuine treat because he’s willing to put his body on the line in the most creative ways possible.  When he was doing the Pratfall Olympics at Die Laughing, it was as much fun to watch him falling all over the sage as it was to watch his daughter gleefully bounce in her chair.

I don’t get to spend a lot of time with Levi, which is too bad.  His positive attitude and intelligence is always worth the time.  Someday, perhaps, we’ll end up working on the same project together.  That would be all sorts of cool.

I’m pleased that knowing Levi led me directly to this project.  I always look forward to what he does next.

Speaking of what he does next – Levi has started up another project called Worth Stealing and you know what?  It’s another great and positive idea.  You can read all of his friend a day posts on his web site leviweinhagen.com.