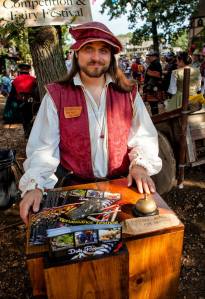 Eric and I started at the Renaissance Festival in 1985 and we have been friends ever since.  This year both of us will celebrate our 30th season.  The years of service awards at the Festival are that much better because I get to share the walk with a good friend.

Eric is well known for being pedantic but that somewhat derogatory term points to how good he is at the little details of so many things.  He doesn’t miss much.

He’s been my assistant director for Vilification Tennis for the last several years and the reason is because he will tell me when he thinks I’m doing something wrong.  I don’t tend to take such conversations well but I usually come around to his way of thinking because he is usually right.

When I’m working on a new project or a new idea, Eric is one of the best resources for me because I understand the language he speaks.  His criticisms and comments are clear and honest and they help me become a better writer.

At the festival, he is a gifted up close performer.  His Concierge character is not a boisterous character that draws a crowd but instead, he is a character built around the idea of improving the festival day for everyone who walks through the gate. Every interaction he has with a patron is a positive interaction.

Conversations with Eric typically aren’t short.  We used to hold monthly Festival get together parties and Eric was frequently the last person to leave.  Often it would be as the sun was rising and he hadn’t yet overstayed his welcome.

Eric is also a gifted costumer, a movie fan, and one of the founders of the CONvergence movie room, Cinema Rex.

I’m lucky to have known Eric for almost thirty years.  I’m hoping we’ll be friends for at least thirty more!

Eric doesn’t have a web site but he sometimes tweets as @PedanticEric.