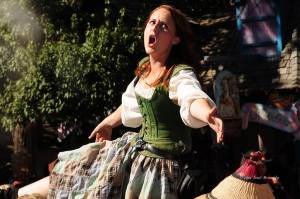 Jade tried out for Vilification Tennis about five years ago now and she has continued to impress me with her desire to find what really drives her artistically.

One of her biggest strengths as a vilifier and as a comic is her expressiveness.  The picture I chose for her is a great example.  Her face conveys a great deal and it makes her writing funnier.

She has a very calm demeanor to her.  Nothing really seems to get her wound up.  She might be nervous before she goes on stage but she doesn’t let it show.  I think it helps the performers around you when at least one member of the cast looks like they are saying “OK – let’s do this.”

I’m looking forward to her continued improvement as a stand-up.  She has a lot of talent and if that is the direction she wants to go with it, I have to believe she will be successful.

I’m glad that Jade tried out for Vilification tennis.  It’s been a pleasure to know her.