Feminist Speaker Forced To Cancel Her Talk After She was Threatened

She didn’t cancel the talk because she was threatened, you understand.  She was still going to speak.

But she asked for protection against someone who claimed he was going to open fire on her and Utah law prevented police from patting down attendees at the event.

So a guy (I’m assuming it was a guy) threatens to shoot her and the police can’t even stop anyone from carrying a gun to her talk.  Because the right to carry a firearm wherever the fuck you want is more important than the right to keep people with firearms out of a place where someone has threatened to kill people with a firearm.

And spare me the good guy with the gun/bad guy with a gun thing.  If the bad guy with a gun gets into the event, he (again I’m assuming it is a guy) will be able to kill his target before anyone kills him.  And that’s all he cares about.

So best case scenario is this asshole (who was probably making empty threats but they still worked) would have died after accomplishing his stated goal.  Which is what he expected would happen anyway.  Great solution, Utah!

Utah! Where you can’t stop homosexuals from getting married and you also can’t stop people from bringing their guns to the wedding!

Please note that I’m not talking about Gamergate for a few reasons.  First, it has been talked to death and the people doing most of the talking are assholes who don’t deserve my time.

And second, we need to stop naming every scandal after Watergate.  It is just so completely unoriginal.  Have you guys heard of the Teapot Dome Scandal?  That’s a great name for a scandal!  Now everything is NounGate.

Nixon is dead, folks.  We need to move on.

The WHO estimates the flu virus will kill somewhere between 250 and 500K people every year.  I think we need a flu czar!

Pneumonia kills over 1 million children every year.  We need a Pneumonia Czar!

Guns kill….oh wait.  I can only talk about things that aren’t covered by the constitution.

Or we could have the Surgeon General take point on this!  That’s a great idea!  Who’s our surgeon general?

Oh, that’s right.  We don’t have one.  Because politics.

So let’s be clear and say that sexually abusing a 16-year-old doesn’t make him a homosexual.  It makes him a pedophile.

Nothing wrong with being gay.  We have to be clear about that.  The problem is not that he is gay. 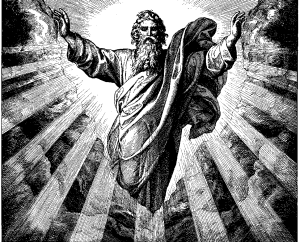 I’m omnipotent but I’m still wearing a toga. Can anyone explain that to me? What I wouldn’t give for some comfortable jeans.

The problem continues to be that he is a pedophile.

An affliction god, in his infinite wisdom, didn’t seem interested in curing.

But then again, that wasn’t the affliction the church was worried about, was it?

So this woman is on maternity leave and asks for a court date to be delayed.  The judge says “no” because it’s her own fault for having a baby and trying to do her job.  Or something.

That’s pretty shitty but what made it extra shitty was the fact he waited until just a few days before the scheduled date to reject her request.

So she did what she had to do.  She brought the baby with her.

I love how the guy had no problem waiting until the last minute to let her know he wouldn’t honor her request and then still blamed the result on her.  It’s her own job for reproducing, right?

Dear movie studios:  you guys do realize that most fan art is better than the promotional materials you put together, right?

That said, this piece of fan art is pretty cool but it does lack something.  What could that be?

Where are the giant robots and giant monsters????

I mean, this is some amazing art.  But where are the Jagers and Kaiju?  I don’t know if you’ve seen the film but it is about giant robots punching giant monsters.

Maybe there are punches being thrown in this picture but the scale is so large, even a class 4 Kaiju would be tiny.

We want robots punching monsters, fan artists!  Give us what we want!

Also, the sword thing has totally been done.  Next time, we want a giant robot with a Halberd.

Now if the guy had found the couple a magistrate who could perform the marriage, I’d probably just dismiss him as a homophobe and get on with life.

The thing is, he didn’t.  He used a position of power to tell a same sex couple that they were, in effect, immoral and did not deserve the same treatment under the law.

And in this case, I mean the law that says those two men had the right to get married.

This guy’s job was the execute the law.  Even if he didn’t agree with the law.

And he provides an excellent example of why separation of church and state is so important.  The moment you allow people to bring their religion  into a courthouse and substitute it for law, you cease to give a fuck about the law.

The issue here is broader than same-sex marriage.  It is about the fundamental idea that law and religion are not the same thing.

Oh Shit, I read the Comments

I’ve been linking to Joseph Scrimshaw’s comedy blog post about Social Justice Warriors a lot this week because, while I think he makes an excellent point, he makes his point in a way that is fantastically funny.  I can’t get the phrase “fairness tool” out of my head.

Cartoon from XKCD.com. Which you should visit because it is funny shit.

They do it poorly but they use a lot of words so it is easy to mistake their ability to write many words for the ability to make a cogent argument.

But one wonders, have they no sense of humor?

No.  I guess they don’t. I need to organize a fundraiser drive so we can send Gallagher DVDs to all of them.

This Week’s Meme That Pissed Me Off

This one was posted by a few friends and at the risk of failing to have a sense of humor (see what I did there), I’m going to go on a mini rant here.

First and least important, who formatted this thing?  What’s with the letterboxing?  They may not have needed any algebra but they sure could have used some geometry.

Second, I’m sick of people hating on math. Know what? We all use algebra ever day without even thinking about it.  We do algebra when we try to figure out if we can afford that new pair of shoes or the expensive cut of beef we want to cook for dinner.

Math is all around us.  Nobody says “hey, I didn’t use my English skills today.”  They seem entirely focused on math as something useless when it is more important than just about anything else.

And sure, you may not use a lot of calculus in your every day life.  But the people who designed your car sure did.  They used Algebra, too.

I get the joke.  I just don’t like the sentiment behind it.

Someone send me a Gallagher DVD.