What I Learned – Just Dance 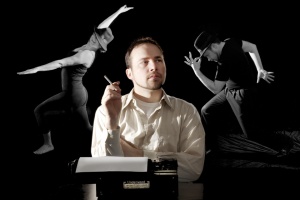 I’m writing a blog series about what I learned in 2014.  The year had highs and lows – as any year does – but I learned a lot.

I’ve never been a very good dancer.  I’m stiff and not very flexible and I’m generally more interested in singing along to a song than dancing to the song so I end up doing this sing-y danc-y thing with a lot of unnecessary clapping.

If I wasn’t keenly aware of my skills as a dancer already, there are plenty of people who are present to remind me.  Hell, The Dregs have made a running bit out of my dancing skills.  I usually try to dance even worse than I already dance just to help punctuate the joke.

Lots of people are bad dancers and I’m good at a great many other things so my self-esteem doesn’t take too hard a hit when people tease me about my inability to cut an impressive rug.

2014, though, was the year where I agreed to dance in front of everyone.  And not as a joke.

During the after part of the Minnesota Fringe Festival in 2013, Windy Bowlsby and I were watching a bunch of our friends on the dance floor.  They were actors, comedians, writers and even dancers.

And I said to her that it would be interesting to see a dance show where all the dancers were people who didn’t dance.  I specifically talked about writers but the basic thought was that it would be fun to see a good choreographer (Windy) take people who weren’t known as dancers and get them to dance on stage in front of an audience.  As a serious dance show.

The moment the suggestion passed my lips, I knew that if she liked the idea, she was going to ask me to be in the show.

My philosophy is to say “yes” to the performance ideas that scare me because I can’t grow if I keep doing the projects that are safe.  So of course Windy asked me if I’d be in such and show and of course I said yes.

And such was the birth of “Jumpin’ Jack Kerouac.”

The show was the best kind of success.  It didn’t succeed because we all suddenly became great dancers but because Windy found a way to bring out the best in all of us and she made the show about something other than “let’s all laugh at these awkward writers trying to dance.”

It became a celebration of potential and I had a lot of performers telling me how much that show touched them.  It touched me too.

The classic phrase is we should learn to dance like no-one is watching.  But someone is always watching.  Even if we shut out everyone else, there is a little piece of ourselves that is keenly aware of our own body movements. And if you are me, you are aware of how dorky you probably look.

At the Fringe after party the last few years, I’ve watched a whole lot of awkward people dancing enough to know that they don’t care if anyone is watching. When dancing to “Firework,” most people aren’t concerned with dancing like a professional.  They just want to dance.

Are people watching me and laughing at how awkward I am on the dance floor?  Probably not because there is someone right next to me who is just as awkward.  Being a bad dancer isn’t the exception.  Most people are bad dancers.

And most people dance anyway because they just feel like dancing.