There was an interfaith prayer breakfast last week and conservative radio host Janet Mefferd was not amused.  All that liberal lip service to other religions did nothing to spare her from hell, she said, nothing at all!

Janet, this may come as a genuine surprise to you but nowhere in the job description for President of the United States does it include “spare people from hell.”  The President has literally zero obligation to spare you from hell.

We’re burning in hell! Thanks, Obama!

I get that being spared from hell is a big thing for you.  So big, in fact, that you believe everyone should be working to save your immortal soul at all times.

I’m sure when Obama is no longer President, he can devote some valuable time to your soul.  Until then, he will be forced to think about everyone else in America.

You will note that I didn’t title this article “Atheist Man Kills Three Muslim People at UNC.”  I could have written that title and it would have been true.

The atheist community is condemning the act as inconsistent with our values and so it is.  Just as the Muslim community condemned the Charlie Hebdo massacre a few weeks ago.  So many people compelled to condemn acts that weren’t their fault.

Atheism and Islam are ideas.  I happen to think one of them isn’t a very good idea but that doesn’t mean the adherents to that idea should be killed as a result.

Nor does it mean it’s adherents should be forced to apologize every time a member of their tribe does something heinous.

I’ve read too many articles that seem to be searching for a connection between his atheism and his inexplicable acts.  He didn’t do this thing because he was an atheist.  He did it because he’s a horrible person.

The phrase activist judge has pissed me off for a long time so I’m wondering if Ray Moore is an activist judge or if that only applies to judges who support same-sex marriage.

After the Supreme Court refused to hear an Alabama case, same-sex marriage became the law.

Oh no you don’t, said Ray Moore, who was famously removed from office when he refused to comply with a federal order that he remove a monument to the Ten Commandments from the court building.  He doesn’t like same-sex marriage so he decided he had the right to overturn the ruling of a higher court. 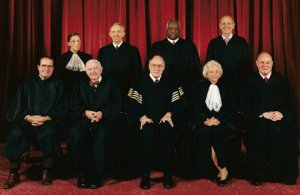 I don’t have to comply with the Supreme Court until one of them is Diana Ross!

He really doesn’t have that right but fuck the higher court, he says.  His concept of right and wrong trumps theirs.

Now my guess is that this guy isn’t considered an activist because in his state, the majority still opposes same-sex marriage.  He probably just tells himself that he’s a champion of the people who are being brought down by the man.

I mean, he’s also the man.  But he’s a better man.  Because he’s got god on his side!  Unlike those pesky Catholics on the Supreme Court.

The story itself is actually an amazing document of a woman who was too drunk to realize what she was doing and a man who somehow managed to place himself between her and the ground.

What is so upsetting, though, comes on page one when you read all the things people were saying about this woman while she was still in a coma at the hospital. Some were bad jokes but some were honestly vitriolic remarks about how the man who rescued her should have just let her die.  They presumed so much about someone they didn’t know.

It brought me back to arguments I’ve had with people about whether or not parents should have brought their babies to Disneyland.  The argument blamed the parents because they should have known their kids would be at higher risk with around so many people.

Or, more accurately, we don’t give a shit.

In a classic example of political doublespeak, he claimed that his order gave “more protections” but what he really meant was that it protected supervisors who want to discriminate against members of the GLBT community.

I can totally fire that transgender woman because she won’t use the bathroom that makes me more comfortable!

As with a lot of right-wing Christians calling for “tolerance” and “protection,” this order seems to be all about “protecting” Christians whose “deeply held religious beliefs” require them to treat homosexuals as the abominations the Bible says they are.  These Christians, it seems, are the ones who need to be a protected class.

Because the majority needs protection from the pesky minorities who feel that they have a right to live openly and without fear of reprisal for the simple act of existing.

The Pope Says Couples Who Don’t Procreate are Selfish

I guess the guy was just saying too many cool things so he needed to say something super judgmental to make up for it.

I have a lot of friends who don’t have children and that choice has never seemed like a selfish act to me.  Having kids is a lot of work.  It requires a lot of sacrifice.

Making the decision to stay out of the procreation business is a mature and responsible choice made by people who don’t want that responsibility.  To call them selfish is to miss the point that having kids is just as selfish.  My wife and I had kids because we wanted kids.

No matter the self-sacrifice involved, we had kids because we selfishly wanted the experience of being parents.

So please, fatherless leader of a religious order that requires you to be celibate, feel free to guilt the rest of us into being fertile and multiplying.

Tags: Assholes on the Internet, Barak Obama, Janet Mefferd, Ray Moore, Shit that PIssed Me Off