Death Threats: The Mic Drop of the Internet

Lately I’ve been noticing that the default response to someone doing something you dislike on the internet is to send them a death threat.

Say you aren’t going to serve pizza to gay people?

Say you ARE going to serve pizza to gay people?

Be a woman with an opinion that you choose to say out loud?

Death threat! Rape Threat!  Public exposure of your address, phone number, and place of business!  But you shouldn’t take it so personally!

It has become clear a death threat is the internet equivalent of a mic drop.

Think you have a cogent argument?  I’M GOING TO KILL YOU!

BOOM!  Your argument is invalid!

I don’t want to make light of this situation because the fear victims experience is very real.  I’m just questioning the creativity and convictions of the people making these death threats.  Do you really think threatening the family of a homophobic pizza maker is going to suddenly convince him to cater same-sex weddings?

The fact everyone is getting death threats serves to provide everyone with a way to dismiss a serious problem.  “You got a death threat?  I got TWELVE!”

It’s like we are playing a game of death threat “Name That Tune.”

“I can get a death threat in three tweets.”

“I can get a death threat in two tweets.”

“Get that death threat!”

Rather than taking this behavior seriously, people just deflect any concern expressed by pointing out that they are victims too.  For example – I tweeted this a few days ago:

Just testing. If I say #gamergate is dopey, will I get death threats? Probably not. I'm a guy. ETHICS IN GAMING JOURNALISM!

It was a joke but it was also a dare of sorts.  I know a lot of women who speak out against GamerGate and almost all of them have been ceaselessly harassed as a result.  I know I’m just one guy but I wondered: If I said something about GamerGate and used the hashtag to ensure they saw it, would anything happen?

Oh, wait.  One guy tweeted something back to me:

@petsnakereggie nope, but you'll get plenty of death threats when you say you support #GamerGate Try it if you feel really edgy.

See what he did there?  He said “hey dude, you have to be a GamerGater to get death threats if you are a white guy!”  Basically, he was arguing that all those ladies who are being harassed should shut it because GamerGaters are suffering just as bad.

This isn’t a numbers game, of course, death threats are unequivocally bad.  They shouldn’t happen.  If  you have a problem with a bigoted auto mechanic, you should find ways to express that displeasure without threatening him physically.

No, I’m not advocating punching anyone in the mouth.  Not even the anti-gay car repair guy.  I’m just saying being pissed at him is different than threatening him.

The internet, though, makes death threats so easy.  You don’t have to cut any letters out of a newspaper or magazine.  You can easily create a fake e-mail address and even if someone could trace it, the police really don’t care.  Probably because they figure if you were serious, you would have used scissors and some paste.

I feel like we need an alternative to internet death threats.  We need something we can all do when someone really pisses us off that isn’t so violent and anti-social.  Something that says “I’d really like to punch you in the face but instead, I’m going act like an adult and I’m only going to…”

What?  I’m only going to what?

Turn you into a meme? 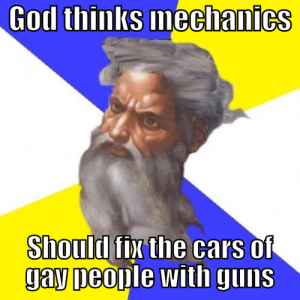 BOOM!  You just got TOLD, son!

We could make a contribution to a charity that will really piss that person off.  And we could do it in their name!

Instead of threatening Brianna Wu with bodily harm, you could just give some money to a pro-GamerGate charity (whatever those are) on her behalf.  Or maybe a pro-life organization.  I don’t know her personally but I’ll bet she’s pro-choice. She’d probably be annoyed but she wouldn’t be worried about some crazed gamer with a gun showing up at her house because some other crazed gamer decided that everyone needed to know where she lived.

We could name a video game character after them and then kill them over and over again.  For me it would be easy.  I’d just name my Halo character – say – “John Boehner” and then I’d play for a half an hour.  I’d probably get killed about sixty or seventy times.  Urge to make death threats against a US Senator: gone!

It seems to me there are literally hundreds of ways to get your aggression out that don’t involve threatening someone’s life.  Perhaps thousands!

Then we can move on to doing something more constructive.  Like respectful dialogue.  Or rape threats.