The Bull in our Stars

I can understand people looking in the sky and seeing pictures.  I see pictures in the clouds all the time.

From our perspective, stars are just dots in the sky.  It makes a lot of sense that people would just play connect the dots.  Especially given our pre-disposition to finding patterns in everything.

What has always seemed strange to me, though, is the pictures that human beings have found in the stars.  Not all of them.  The big dipper makes sense.

I see a handle.  I see a cup.  It looks like a dipper. It also looks a little bit like the Tin Man’s oil can but I’m willing to call it a dipper.

It is also part of Ursa Major.  Which is supposed to look like a bear. 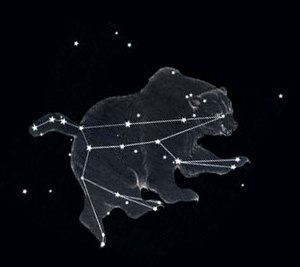 Ignore the picture of the bear juxtaposed over that group of stars and ask yourself: if you looked at that particular grouping of stars, would you immediately come to the conclusion it is a bear?

Or would you think it was some sort of insect?  Maybe a box elder bug.  Or a praying mantis.

I think the fact constellations don’t actually look like the thing they are supposed to look like is one of the reasons I’ve never been able to buy into astrology.  Take my astrological sign, Virgo.  Here it is displayed in pendant form. 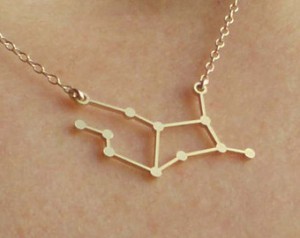 The ancient greeks looked at this gathering of stars and rather than thinking it looks a little bit like a spider someone stepped on, they decided it looks like a reclining woman.  While I understand it is preferable to identify oneself with Virgo the virgin rather than Archnae the squished, the picture in these stars feels like a bit of a stretch.

Taurus the bull is another puzzling constellation.  Take a look.

Knowing it is supposed to be shaped like a bull sure doesn’t help me.  What about if we draw a picture over the top? 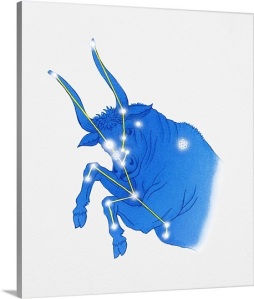 So those two stars at the bottom are supposed to be his knees?  How was I supposed to figure that out?  He’s got a couple of horns, I guess, so that obviously makes him a bull since there are no other animals with horns.

Unless you put a picture on top of it, that group of stars looks a little bit like someone using a dowsing rod.  Or one of the cranes currently erecting a new stadium in downtown Minneapolis.

I imagine the ancient Greeks sitting around the fire and looking up at a sky filled with stars none of us have ever seen due to light pollution and saying “Hey Pathotakos: that bunch of stars looks like a bull.”

“That’s crazy talk, Menomadias, it looks like a guy about to trim his hedges.”

“Here, Pathotakos.  Let me draw you a picture.”

“I know! Mount Vesuvius is dormant!  What’s that noise?”

Yes, I know Mount Vesuvius is in Italy. Geographical accuracy is not the point here.

My point is constellations are a bit of a stretch.  If you connected the dots in a different way (like – say – they did in China), the same stars would make a completely different imaginary picture.

How about a Bruce Lee constellation? I could get behind one of those!

I don’t want to sound like someone devoid of imagination but the pictures in the stars never seemed quite so interesting to me as the stars themselves.

The light I see may be coming from a star that went super nova a million years ago.  I’m traveling through time to look at a dead star.

And if they have, perhaps they are looking at the years-old light from our sun and playing a game of connect the dots to create a picture they would recognize.

That thought, more than anything, is probably why I’ve never seen pictures in the stars.  I’m too busy looking at the stars.