Drug Testing for Welfare Recipients is a Huge Bust

Government needs to be smaller, they tell us.  It isn’t that I disagree with that basic sentiment but I don’t understand why there is a huge push from the right to test welfare recipients for drug use.

I mean, I understand the basic (dumb) argument.  We don’t want people receiving handouts to be using those handouts to fund a drug habit.  Better that they receive zero money and zero treatment and they die in an opium den, I guess.  Or maybe they will just have their legs broken because they can’t pay their dealer.

Anyway, the problem isn’t the rationale so much as the results.  The number of drug users being caught is so low, it doesn’t come close to saving the government the money it is spending on catching the drug users.  Has anyone thought about rebranding the “war on drugs” as a “limited police action” on drugs. 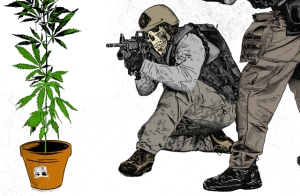 Throw down your pot and put your leaves up! DO IT NOW!

So instead of small government, we have big government looking for evidence of drug abuse and finding comparatively little.  Even if estimates are correct and 8% of welfare recipients are drug abusers, that leaves most welfare recipients in the position of being assumed guilty until a drug test proves otherwise.

Which means it may be legal but it is almost certainly a bad idea.

Fox Host Suggests We Clear the Ocean of Sharks

After a surfer had a tangle with a shark over the weekend, some folks freaked out in wholly predictable ways.  This particular talking head wondered why nobody cleared the area of sharks prior to surfing competitions.

Never mind that the entire incident may not have been an attack but rather a trapped animal freaking out.  The issue is obviously with the animal who lives in the ocean and not the animals who simply borrow the ocean for their own amusement.

I don’t think it is really worth it to bash on Fox specifically.  This kind of uninformed, idiotic opinion could have sprung from the mouth of any morning show host.  They are paid to comment on the news of the day without actually needing to know anything.

I keep wondering, though, how does he think we should clear the ocean of sharks?  Send out a bunch of guys with harpoons?  Fill the water with Bat-shark repellent?  Schedule a showing of Jaws at the local theater?

Trump is a thin skinned asshole.  Does that strike anyone as the best character trait for President of the United States?

Now look, Graham said some less than kind things about Trump in the wake of his insulting comments about John McCain. So Trump fired back.  Which, I guess, is OK.

It isn’t what someone should do if they are trying to convince the public they won’t be a reactionary jackass once they are President but, to be fair, political jabs are part of the campaign landscape.

When Trump followed up the jab by revealing Graham’s private cell phone number, however, he essentially encouraged his supporters to harass an opponent.  His act was embarrassingly juvenile and speaks volumes to the kind of president he would be.

To be fair, I was surprised to learn that Graham had a cell phone.

He would be a bully to anyone and everyone who disagreed with him publicly.  He would use a position of power to silence them.

Do I think Trump will ever be President? No.

Does it piss me off that he has any measure of support whatsoever? Yeah it does.

I know the video included in this link lacks sound and doesn’t show what transpired prior to the police officers entering the frame.  Everything they did could make perfect sense.

But to me, it looks like the guy wasn’t resisting arrest and he got smacked around anyway.

I don’t know if he really stole some pizza.  Let’s assume he did.

The response feels a bit out of proportion to the crime, doesn’t it?  I mean, perhaps he was saying really inflammatory stuff.  We can’t hear what he’s saying so it’s possible the cops were provoked.

But we are talking about two slices of pizza.  I think a little perspective is warranted.

The story doesn’t piss me off.  Ted Cruz is a Trekkie (good for him) and he said he thinks Kirk is probably a Republican.  That is idiotic, of course, because Kirk clearly had no problem with gays in the military.

Shatner pointed out that in a galactic alliance, “Democrat” and “Republican” would probably be antiquated ideas anyway.

Oh who am I kidding? He’d probably say Bartlet was “secretly a Republican.”

Living with the benefit of hindsight, I can see why people might be creeped out seeing the British Royal family giving a Nazi salute.  Yet I can’t understand what is so shocking about it.

The picture was taken just after the Nazis had risen to power.  Elizabeth’s uncle was a well known sympathizer.  Seeing him teach his family the Nazi salute is akin to American families teaching their kids the difference between and American and a  British salute.

Responding “holy fuck! A five-year-old queen Elizabeth wanted to kill the jews” qualifies as a bit of an overreaction.

That it is considered any kind of news only proves that sensationalism is more important than facts.

It is also a great illustration of why Donald Trump is considered a serious candidate.  If a five-year-old Elizabeth saluting Hitler is considered news, Some billionaire asshole running for President doesn’t seem so crazy.