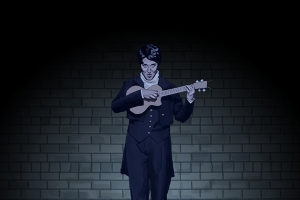 I cannot presume every artist has the same Fringe experience as me.  Yet it would seem that one of the most common topics for discussion at Fringe central is whatever show everyone is going to do next year.

Having managed to pull together one show, it is time to come up with the craziest of ideas for our follow up.  For at least ten minutes last year, I was seriously contemplating “Shark Week: The Musical.”

You get five shows over ten days.  Then you’re done and this little slice of theatre Brigadoon evaporates into the mists for another twelve months.

But while we all nurse our beers at the Red Stag, the theatre community of the Twin Cities turns into a gigantic brainstorming session.  Ideas are flung about in a (sometimes) drunken frenzy and every single one of them could turn into something spectacular.

Most of them (like “Shark Week: The Musical”) are rejected (or forgotten) and fade into the mists of a sleep deprived hangover, but I can never help but wonder what shows at this year’s fringe were given birth at last year’s Fringe.  And what shows will never end up on a stage.

The following reviews are from a long Saturday of Fringing.

For the record, mine involved a Nintendo, a Sun Porch, and some dishes.

The arguments are hilarious and, yes, really stupid.  But people who love each other argue about stupid things all the time.  If anything, watching this show will make you feel better about your own stupid fights.  Definitely a show worth seeing.

By the way – for those who have seen the show – it’s obviously a hot dog, right?

This production is super slick.  The talent of the cast is unmistakeable.   Kim Kivens’ portrayal of  Shelly Bachberg is frighteningly spot on.  She also has one of the best voices in Twin Cities theatre.

I found the lyrics of the songs hard to hear at times and that was certainly a challenge.  Even when I could understand the songs, though, they were repetitive and over long.  Each song had, basically, one thing to say.  Then it would get said over and over again.  Mostly, the songs were saying “whoa!  Shelly Bachberg is one crazy lady!”

But in the end, I wanted more.  Especially from the music.  I enjoyed the show a great deal more when the characters weren’t singing.  The limited dialogue tended to be much funnier.

Nothing was fundamentally wrong with this show.  If you want to laugh at our crazy former congresswoman (or legally distinct theatrical surrogate), I’m positive this show will provide you with many opportunities.

But I left unfulfilled.

Remounts at the Fringe can be tricky.  Often audiences are less than friendly.  Minnesota audiences want new shows.  Not old shows.

However, I was thrilled “Edgar Allan” was remounted this year because I didn’t have a chance to see it last year and just about everyone I knew raved about the show.  By the time I could work it into my schedule, they were selling out every show.

I wasn’t going to let that happen this year.

Two actors, a ukulele, a trumpet, and one very sinister looking doorway are used to tell a story of young Edgar Allan and his chief rival.  I had questions about the nature of these two characters the show took pains not to answer.  I liked that.

It is funny, extremely well written, and just a little bit sinister.

We should all be happy they brought the show back because now more of us will have a chance to see it.  Or see it again.

MOMENTS: The Musical Told Through a Shattered Lens

This show was produced and directed by my longtime friend and collaborator John Newstrom.

I would like to give the show a full review but there were technical issues that made a fair review impossible.  The music was so loud, I couldn’t hear the lyrics of the songs.  This in spite of the fact the performers were wearing body mics.

I know Jacob Effinger, who played the lead, has a very good and very strong voice.  Yet I could hardly hear him.  Camille Isadora Smith may as well have not been singing at all.  I’m not sure her mic was working.  Chris Hoefer was the only singer whose voice (barely) rose above the music.

I know both of the lead performers in this show and really want to tell you I enjoyed the show.

I liked the concept of theming sideshow acts (like walking on broken glass) to video games.  It seemed like a great premise.  The premise wasn’t the issue.

It was the sideshow acts.

Here’s the thing, I’ve seen Oops the Entertainer do these same gags before.  My issue is not that I’m familiar with them.  Rather it is with the fact he didn’t set them up to make them feel dangerous or interesting, he just did them.

I’ve seen him sit on a bed of nails and have someone smash a cinder block on his crotch.  And I was really impressed because the set up was better than the gag.  With the set up eliminated, the gag didn’t feel quite so impressive.

The Sound of Footloose: The Not Musical

Yeah.  I saw my own show again.

I keep thinking I’m not going to see every performance my show when I’m not appearing on stage. I mean, I don’t need to be there.  I’m pretty darn familiar with the thing.  Then I go to most (or all) of them anyway.

I was happy to see some technical issues from the first performance were cleaned up and the cast looked a lot more comfortable on stage the second time around.  Hooray, everybody!

Also, the Pioneer Press rated us a Must See!  So that makes me happy.