The Arizona Cardinals became the first team in NFL history to add a woman to their coaching staff when Jen Welter was hired as a pre-season intern working with the inside linebackers.

Don’t care about sports? That’s fine.  The breaking of the gender barrier is still important even if she is not a permanent member of the coaching staff.  If she does a decent job, one can assume she will open the door for as many as two or three other women to have temporary coaching jobs in the NFL.

The article linked above is in Welter’s own words and mostly she is talking about how excited she is by the opportunity.

Later, though, she talks about friends in women’s football being called up to do interviews with ESPN because of her.  And she says this:

I won four championships and two gold medals and I was never asked to go on ESPN. None of us were.

Got that? She was an accomplished athlete before she temporarily joined the Cardinals coaching staff and nobody on a 24-hour sports station wanted to talk to her.  Or anyone else involved in women’s football.  Until now.

Have no fear, gentlemen (including the brilliant guy who commented on the article by saying women will never be equal to men until they have to sign up for the draft).  The glass ceiling is still very much intact.

Yep.  There is a pride parade in Jerusalem.

And this year, a loon with a knife attacked people, killing a sixteen year old girl.

That in itself is horrifying.  What’s even more horrifying?

This is the second time the guy has done it.  In 2005, he stabbed three people at the pride parade and was sentenced to ten years in prison.  He only got ten years because he only tried to kill three people.  He didn’t succeed.

So as soon as he got out, he tried again.  His results were better the second time around.

I realize that once someone is released from prison, they have served their time.  But did no-one notice that his burning hatred of homosexuals hadn’t diminished over time? Was there no understanding that he was likely to do the same thing again?

Seems that prison is for locking people away from society.  We don’t even try to help them, do we?  In this case, it seems like we don’t even care if they might be repeat offenders.  Put them in.  Let them out.  If they do something wrong, put them in again.

Speaking of Football, Running Back Arian Foster is the First Pro Football Player to Come out as an Atheist

Actually, he doesn’t call himself an atheist because he hates labels.

Foster’s story is a good one to read because he is a secular man in an environment that is deeply religious.  He asks the same questions I do.  Like wondering why god would give a rip about the outcome of a football game.

Where I run into issues is in the areas where the writer of the piece starts to editorialize.  Specifically:

What does that mean?  What is a fundamentalist atheist?  Are those Fosters words?  It isn’t a direct quote so I assume it is an opinion of the author. 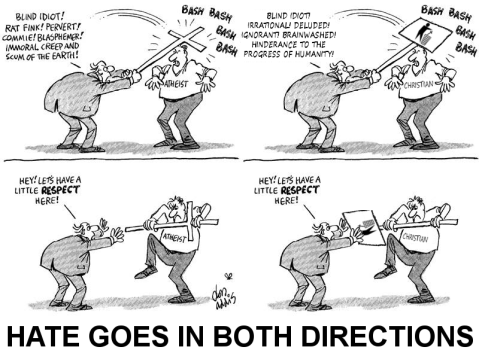 Apparently, fundamentalist atheists get pretty pissed off when you litter.

A-ha!  That Dawkins is willing to openly critical of religion and, therefore, he is a fundamentalist!

Look, I have my problems with Dawkins but there are problems with religion he is pushing people to talk about.  To lump the intellectual exercise of being critical of religion in the same group with people who carry signs saying “god hates fags” and people who fly airplanes into buildings is to almost willfully mischaracterize Dawkins.

He can be an asshole.  But he isn’t blowing up churches.  He just wishes people would stop using them.

And also their projects.  Sure.

So Eisenberg and Stewart made a video in which Stewart asked Eisenberg all the questions she typically receives on a press tour.  When Eisenberg has to field them, they seem awkward and offensive.

Well when the CNN anchor (a guy) weighs in, he basically says “you are an actor, what right have you to complain about what kinds of questions you get on a press tour?”

Right?  Fuck Kristin Stewart for wondering why it was appropriate for someone to ask her if she’s had any work done.  Or for being asked if she was pregnant.  She’s an actress and she should expect that kind of treatment.

Seriously.  Watch the linked video if you can.

Here’s a link to the original video without the holy shit you are a fucking asshole commentary.

For the fourth time this year, a mob has hacked a secular blogger to death in Bangladesh.

I mean, I get that the guy isn’t a beloved lion but at some point, I feel like we should get upset about this.

This story right here is why we can, from time to time, be a bit critical of religion, OK?

Because people aren’t going to hack a secular blogger to death unless they are compelled to do so by a religious leader.  I mean, we are basically talking about a thought crime, right?  The guy doesn’t like religion and he wrote about it. So they killed him.

With all the talk about religious freedom, there needs to be a conversation about freedom of speech and how speaking out against religion should not result in a death sentence. While this may not be an American problem, it is a problem.  And it should concern all of us.

CEO Who Decided to Pay His Employees 70,000 a Year and Take a Pay Cut is Under Fire

Kind of amazing, really.  He decided he was going to pay everyone in his company a living wage and the result is a loss of clientele, some people quitting because they didn’t like the idea other, less skilled people would be paid the same as them, and he is facing a lawsuit he can’t afford.

I guess I understand someone with seniority being upset they are going to be paid the same amount as another person who started last week.  Maybe something could have been done there and, I imagine, it might be fixed over time.

Yet the laudable goal of giving a shit about your employees may have backfired and that should concern all of us.

Yes, he has gotten considerable new business.  But the nature of his business is such that he won’t see the income from that business for a year.  In the meantime, he has to spend money fending off a lawsuit from his brother, who feels he is misusing company funds.

By paying his employees.

Mat Staver is standing up for a Kentucky Clerk who doesn’t want to do her job and issue marriage licenses to same-sex couples.

The solution, he thinks, is to create some no-gay zoned cities where people can go and live free of the influence of the society-killing legalization of gay marriage.

I know this looks sweet but those two guys didn’t even rent tuxedos! GOD DOES NOT APPROVE!

In other words, he thinks that people like him should be able to live in a part of the country where the laws they don’t like don’t apply to them.

Now should liberal or secular folks suggest the same idea, he would argue that we are persecuting Christians.  Because he’s too selfish to understand that he’s got to deal with a few laws he doesn’t like.

And so does that clerk.  Or she can get a different job.