No Hymen, No Diamond

No link on this one.  Do a Facebook search if you want to find it.

This Facebook group is dedicated to the idea that men deserve virgins to marry.  If a girl doesn’t have a hymen, they aren’t going to put a ring on it.

They also post a lot of really super funny misogynist jokes like “How many feminists does it take to change a lightbulb…. 0, everyone knows feminists can’t change anything!” 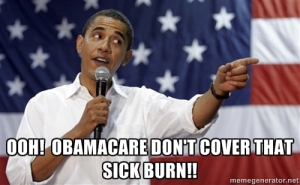 Well, sure.  You got the right to vote and paid family medical leave and legalized abortion but what have you done lately?

I shouldn’t give a shit about a bunch of insecure men’s rights assholes and for the most part, I don’t.  They are an embarrassment to other human beings but I believe their point of view is the minority and they just look like petulant douchebags who resent all the women that won’t date them because they are disrespectful cocks.

But I’m raising two boys.  And I’m trying to teach them that women should be loved and respected and afforded all the rights men take for granted.

And the existence of garbage like this makes my job a little bit tougher.

She wouldn’t let him play with a puppy.  So he went home, got a loaded gun out of the closet, and shot her.

What kind of fucking idiotic parent thinks that their kid doesn’t know where they keep a loaded shotgun?  Kids are smart.  Smarter, it would seem, than adults.

This is the kind of reasonable gun control argument we need to have.  Let’s not talk about whether or not the family had the right to own a gun.  They unquestionably did.

But can we maybe pass some laws about how guns are to be stored when there are kids in the household or something?  I mean sure, maybe the eleven year old kid is a budding sociopath who would have killed that little girl with whatever weapon was convenient.

I know we all think we need to protect our family with that gun but the facts simply don’t support that perceived need.  If you want to keep a loaded shotgun in your house, the odds are much higher that shotgun will be used to kill a member of your family.  Or an eight year old neighbor.

The debate over reasonable gun control – and it is wrong of me to call it a “debate” as nobody in a position of power is listening to or giving a fuck about what the other side is saying – should not be about taking away guns.  It should be about ensuring innocent people aren’t collateral damage because people want their guns so badly.

Another Meme that Pissed me Off

Memes are stupid.  We can all agree to that, right?  They take complex issues and reduce them to a sound bite.  So let’s check this one out.

Actually, his name is spelled Abel.  How about you get at least that much right?

And what the fuck does this even mean?

For those unfamiliar with the Bible, here’s what Jeremiah 17:9 says:

The heart is deceitful above all things and beyond cure. Who can understand it?

Nothing to say about Cain and Abel so I’m not sure what they are getting at.  I suppose they are saying hey – we are all fucked up because our hearts are fucked up organs we can’t understand.  Never mind that all emotions come from the brain and our heart is simply a muscle used to move blood through the body.  Our heart is what is broken!

If we just fix everyone’s heart – even though the passage quoted here would seem to imply that is impossible – we can fix everything and we won’t have to talk about guns any more.

I’m sorry, Christian meme creator, we really do have a gun problem.  One poorly selected passage from the Bible isn’t going to change that.

Mostly, I don’t care for their pizza.  Except their cactus bread dessert pizza.  That stuff is absolutely amazing and I would easily eat a whole one all by myself.

And I’m a diabetic so I can’t do that.  Which means going to Pizza Ranch just makes me sad as I watch other people eat my cactus bread.

But what really bugs me about Pizza Ranch is the way the company pushes God on you.  Their vision (To glorify God by positively impacting the world) is posted in the entryway.  They sell Christian music CD’s in the lobby.  They play Christian music all the time.

And that’s fine.  It’s their business.  They can wear god on their sleeves if they like.

What makes me angry is the idea that Christians in this country feel they persecuted when companies like Hobby Lobby and Pizza Ranch and Chik-fil-a are welcome to scatter their Christianity throughout their business and, in fact, probably gain clientele simply based on the fact they are openly Christian.  Conversely, can you see a business that was openly Muslim being as successful on a national scale?

How about a business that actively promoted free thought?

Now I’m not saying atheists are persecuted in America because we aren’t.  I’m just saying the next time a Christian tells me they are being silenced, I’m going to tell them to go to Pizza Ranch for lunch.

Donald Trump is Bad but Ben Carson is a Whackadoodle

Currently polling second, we have an opportunity to really understand what Ben Carson thinks.

In case you wanted to know, he thinks that more access to firearms would have prevented the holocaust.  If the Jews had been armed, concentration camps would never have happened!  They would have just gone fucking Rambo on the Nazis!

While I don’t deny that would make a good movie, it wouldn’t be a very realistic one.

Carson is also a young earth creationist, which also creeps me out.

I’m a liberal.  I don’t agree with any of the people who might get the Republican nomination.

I am also aware that conservatives are against gun control and that means candidates for the Republican nomination will get nowhere by supporting gun control.  The Christian right is primarily Republican so that means they gain votes by touting creationism.

Politics is not about what you believe but what your constituents want you to believe.

But Carson genuinely believes this stuff.  He doesn’t just believe it because it will get him votes. And that should scare the shit out of reasonable people of every political stripe.

Tags: Gun control, Meme that Pissed Me Off, Pizza Ranch, Shit that PIssed Me Off