I think it is universally understood that women are never supposed to be naked in public.  Breast feeding is the sort of thing that should be done in private and goodness knows you should never feature the bare ass of a woman on a poster being displayed where children might see it. 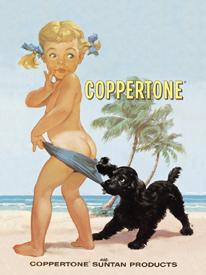 The bare ass of a little cartoon girl, however, is completely OK!

It seems to me that our threshold for what is pornographic is beginning to creep into the “any part of a woman’s body that is not her forearms or knees” territory.

Parents sure are concerned about what their kids might think about sex.  Having kids myself, this concern seems so completely baffling.  When my kids were young, they would probably have giggled at naked butts because they thought the word “butt” was funny.  Then they would have made fart jokes.

Two of the church members involved were the kid’s parents.  So much for the love of god.

Apparently the young man and his brother were brought in for a counseling session.  They were “counseled” with repeated blunt trauma.

I know that it is easy to look at this church with 35 members and say “yeah – well all churches aren’t like that.”  And they aren’t.  I’m not going to demonize religion as a concept here.  Almost all people across every religion don’t beat their kids to death for not believing in god hard enough.

Had these awful people not found a useful passage in the Bible, they would have found some other reason to beat these two young men.

Yet, it makes me wonder this: when Kim Davis uses the Bible to support her bigotry or creationists use the Bible to ignore scientific fact, we are faced with proof that the Bible can be used to justify a lot of messed up shit.

And maybe folks should think about that the next time they point out that wildly misinterpreted parts of Darwinism were used to justify Hitler’s extermination of the Jews.

Of course the whole issue has turned into another argument in the gun control debate and the obfuscating argument that is always used to deflect the conversation.

See, whenever gun violence takes place, the response is “well the killer could have just as easily used a different weapon to do the job.”

I just want us to stop pretending that guns aren’t designed to make killing more efficient.  A car is built to reduce the risk of injury in a crash.  So if you run a car off the road, there are seat belts, air bags, crumple zones, and other safety features that are designed to protect the people inside.  When someone dies, those safety features failed.

They also spend countless hours trying to kill fake people to make sure they did a good job not killing real people.

When you point a gun at someone and pull the trigger, there is nothing in the design to protect the person on the other end. In fact, if a gun were designed to reduce risk for that person, it would be a shitty design.

If we are going to have a reasonable conversation about how to reduce gun violence, we can’t start with the “well, they could have killed someone with a not gun” argument.  While unquestionably true, it ignores the fact that they didn’t.

So why not relax the uniform code just a little bit so a guy can raise a few bucks for breast cancer awareness?  Did it escape your attention that his mom just died?

Failing that, just have some team threaten to move unless their entire fan base coughs up $5.00 for breast cancer research.

The NFL will argue they do a lot of stuff for charity and they definitely do.  They could do more if they diverted a few million from that stupid fucking court case nobody cares about any longer but maybe my priorities are just out of whack.

I just don’t think the integrity of the game is going to be adversely affected by a pink wrist band.

Earlier this week, the Lynx won the WNBA title and it was a pretty big deal.  Prince was even there (and he threw them a killer concert later).

You wouldn’t have known it to look at the front page of the Sports Illustrated web site, though.  They had top stories about Football injury reports splashed across their front page.

I understand that the WNBA is not as popular as pretty much every other professional sport but don’t you think sports journalism has something to do with that?  I mean, we are talking about a championship in the only major women’s league in the country.  Could you put a picture up on your front page? 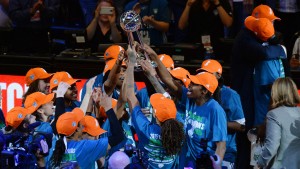 This would have been a good one.

For contrast, one of the top stories on Si.com as I write this blog post is about which Michigan College Football team is the best.  Which doesn’t seem like a bigger sports story than who won the WNBA championship.

We are dealing with a self fulfilling prophesy here.  Sports writing ignores women’s sports because they aren’t as popular.  Women’s sports continue to be unpopular because nobody is talking about them.

Oh, and by the way – do you know what most of the players who just won a championship get to do next?

They get to go play in international leagues because they don’t get paid enough to have an off season.

Jennifer Lawrence Says she is Going to Stop Being Nice

Jennifer Lawrence is one of the most outspoken actresses working in Hollywood right now.

And yet she is expected to behave differently than men in the industry.  If she expresses her opinion forcefully, she is labelled as too aggressive or a bitch.

She’s tired of the double standard.  It is a double standard that exists everywhere from highly paid actresses to minimum wage workers at McDonald’s.  Women who are willing to say what they think are thought of more negatively than men who do the same thing.

I’m going to tell a story about my friend Windy.  A few months ago, she opted to bring up some concerns in a public forum in a forceful manner.

Windy isn’t afraid to be the person who brings up difficult topics.  She never has been.  The two of us have gotten into pretty heated conversations when we disagree.  By “heated,” I mean we’ve screamed at each other.

So Windy made public comments that echoed how several people, including myself, felt.  The result was a whole lot of other people thinking she was a bitch.  And saying about as much.  It isn’t just men either.  It’s everyone.

And I can’t help but wonder if a man saying the same things in a similar tone would have experienced the same kind of judgement.

I don’t think he would have.  Certainly not to the same degree. He would have been considered strong and courageous for speaking out and asking challenging questions in public.  Because that is something guys are expected to do.

Nobody makes these judgements with intent.  We are trained to believe women must behave in a certain way.  When they do not, we are trained to make sure they know they messed up.

I’m not pissed off at Jennifer Lawrence.  I’m pissed off at a system that is set up to ensure she gets paid less by making her feel guilty when she asks for more.