I’m very careful to research the stuff I post for this blog.  I want to make sure I understand the complete story before I rage against something that isn’t nearly as bad as it first appears.  If my information comes from addicting info, I make sure I find another source.

So when a cell phone video of a “school resource officer” throwing a teenager around surfaced, you’d think I would look for the other side of the story.

See it literally doesn’t matter what the student was doing wrong prior to the video.  The extremely violent action was not provoked by a kid sitting at a desk.  Even a kid refusing to leave the classroom.  The officer lost his cool and physically assaulted a child.

To enter a dialogue saying “well she must have done something to deserve that action” ignores the fact that circumstances in which someone deserves to be beaten up are extremely rare.

Did Apollo Creed deserve to be beaten up by Rocky? Or Rocky by Apollo? If only they had just talked it out.

If the assault had been committed by a guy who wasn’t in uniform, nobody would be trying to make excuses for his act.  But he’s a cop so he clearly did everything right and his actions shouldn’t be questioned, right?

He’s a cop.  So he should know better.

And the rest of us should stop trying to find an excuse to blame the victim.  When someone starts hitting a person who is not hitting back, the person doing the hitting is to blame.

Dear NFL: this is getting out of hand.

I know you want some level of consistency in player uniform but charging a player whose mother was killed in a domestic violence incident for promoting a cause that could have saved her life is just a little bit heartless, don’t you think?  I mean especially in light of your consistently poorly conceived efforts to punish players who commit domestic violence.

Except the ones who are really gifted athletes.  You call them one of the leaders of your team.

Now the fine being levied is nearly nothing.  Not even $6000.  To a star football player, it is simply a symbolic gesture meant to remind him who is in charge.

But this is getting stupid.  On the one hand, the league says that it takes domestic abuse seriously.  On the other hand, they don’t take it seriously enough to allow a player to support the cause without fining the guy for doing so.

Yes, I know I shouldn’t have gone to a web site called “Biblical Gender Roles.”  It is extremely unlikely I would find anything there that would make me happy.

It is my own fault that I ended up reading a helpful article entitled “How a husband can enjoy sex that is grudgingly given by his wife.”

By “helpful,” I mean “horribly misogynistic and filled with what seem to be misinterpretations of the Bible and a complete misunderstanding of female sexuality.”  In essence, this article says “hey guys – you like sex a lot more than women do and the Bible says your wife has to have sex when you want it. Sometimes, she won’t enjoy it.  How do you make that experience more enjoyable for yourself?”

How about rejecting the entire idea that women enjoy sex less than men because it simply isn’t true?

Sorry folks, we were threatened with harassment so we caved and won’t let people talk about harassment.

The best way to make harassment go away is to ensure it is clear that the harassment works!

Now, to SXSW’s credit, they finally admitted the screwed up and have now created one-day “Online Harassment Summit.”

If only they had come up with that idea before they cancelled the panels.

Look, ISIS has nothing to do with religion.  We understand that right?  Their perversion of belief is not what is behind their violent and immoral acts.  They use the belief to justify the acts they would do anyway.

I’m appalled by their complete disregard for the lives of others, yes.  I’m not nearly as appalled at their disregard for historical monuments that would have stood long after their bullshit movement vanished from the Earth.  But I’m still appalled.

To be fair to ISIS, this kind of bullshit move is far from unprecedented.

I’m also appalled because there is literally nothing useful that we can do.  Now.

We had our chance.  A couple of times.  When we took out Saddam Hussein, we had a chance to help that region heal.

I’m no expert, mind you, but let’s be clear – what we did wasn’t the answer.  The west consistently fails to understand the east and as a result, we are doomed to make things worse every time we go there.

So we have to stop.  And that means we have to just watch as an injustice like this unfolds.  Because if we roll in there again like saviors, we are only going to be responsible for something worse.

Atheists Adopt a Highway and Their Signs are Vandalized

So a bunch of atheists agreed to pick up trash along a two mile stretch of highway.  Mighty selfless, don’t you think?

The Christian response, I would think, would be to do nothing because you may not like atheists but hey, they are picking up trash and you aren’t.

Vandalism doesn’t seem very Christian.  How do I know the vandals were Christians?  Well, technically I don’t.  But let’s look at the signs, shall we? 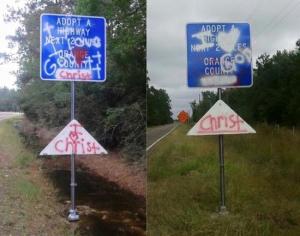 Clearly the work of Islamic extremists!

So while this could have been done by some agnostics who were trying to restore balance to the force, I’m going to guess that isn’t the case.

Is this in retaliation for a rash of atheist vandalism of Christian adopt-a-highway signs?  I mean, who gives a fuck who cleans up the trash by the highway?  I’m not saying I’d be happy to see a sign saying the KKK had adopted a highway but on the other hand, at least they would be doing something useful for a change.

It just seems so silly.  I’m just not certain this kind of thing is what Jesus had in mind.

Tags: Blaming the Victim, GamerGate, ISIS, NFL, Religion being shitty, Shit that PIssed Me Off