A Few Christians are Pissed about a Coffee Cup

Starbucks has unveiled their holiday coffee cup design and it is boring.  It is literally a red cup. Their marketing team has covered up the fact they apparently chose not to hire a graphic designer this year by saying the plain red cup allows people to assign their own holiday story to the cup.

Which, I have to tell you, is one of the dumbest marketing ideas ever.  A coffee cup is not a tabula rasa and I sincerely doubt the next Pulitzer prize will have anything to do with the color red or coffee.

A few Christians (a very few) have decided, however, that this cup represents the first salvo in this year’s War on Christmas (TM)!

How dare Starbucks fail to emblazon their cups with snowflakes or snowmen as in years past?  Snow, of course, being one of the most recognizable symbols of Christmas the world over.

If Starbucks is engaged in the War on Christmas (TM), they are clearly not fully committed to the fight.

This whole story, by the way, is amazing.  You have Bristol Palin saying it is a conspiracy by the left to make the Christian right look dumb.

You have the guy who started the thing looking like an idiot when he defends his bullshit opinion.

And, of course, you have Starbucks.  They have made so much money off of this “controversy,” they must be hoping it goes on for a least another couple of months.

Greg Hardy is a Violent Jerk, But we Already Knew That

Amidst all of the outrage over these pictures has come a very reasonable response: why is this a surprise to anyone?

As with Ray Rice last year, the level of abuse was never in doubt.  There is all sorts of court documentation detailing what he did to his former girlfriend.  It isn’t until we see pictures of the damage he did that we acknowledge he is an abusive fuck?  It’s like saying “tornadoes sound bad but it isn’t that big a deal” and then freaking out when you see what one did to a trailer park.

Look, the only reason Ray Rice isn’t playing football this year is because the prevailing opinion is that he was in decline anyway.  It has nothing to do with the fact he beat up his girlfriend.

So the outrage over the latest pictures of a battered woman is misplaced.  We shouldn’t have needed the pictures to be outraged.

The Mormon Church has exercised it’s religious freedom to remind church members that homosexuality is still bad.  So bad, in fact, that children of Mormon couples who are in a legal same-sex relationship could be banned from membership in the church.

I guess the church is worried about gay germs or something.

Or perhaps gay people have upwards of 100,000 volts coursing through their bodies!

Now, my primary response to this story is to think those kids are lucky as hell.  They aren’t Mormons any more!  That sounds like a fantastic deal.

But if those kids want to be Mormons, the Mormon church shouldn’t be making them choose between their faith and their family.

Too many versions of faith, however, do this all the time.  It tells you that god is more important than your kids or your parents or your siblings.  You want to get depressed?  Talk about what happens to a Jehovah’s Witness who has left the faith.

Speaking of Mormons (I don’t know if this guy is a Mormon but he graduated from Brigham Young University and lives in Utah so let’s just make an educated guess), how about this guy?

And he made the decision because he says he’s read research that indicates kids are better off in heterosexual households.  When pressed, he did not provide a source for his information because he’s a judge and he doesn’t have to.  Also because it doesn’t fucking exist since it isn’t true.

I’m sure that conservatives look at this guy and even if they think he’s a complete asshole (because he is), they wouldn’t label him an activist judge.  Because activist judges only come in one flavor and that flavor is liberal.

But this is the perfect definition of an activist judge because his ruling is literally in conflict with the actual law.

Just this morning, by the way, he decided to let the child stay with the couple.  For now.  In his ruling, however, he wrote this:

The court cited a concern that research has shown that children are more emotionally and mentally stable when raised by a mother and father in the same home.  (citation needed but not provided because the court doesn’t have to provide citations *mic drop*)

There is a new hearing scheduled for the 4th of December.  What an asshole.

Personally, I think the behavior of asking people to smile is condescending as hell.  How the hell do you know what kind of mood they are in?  You aren’t going to cheer them up just because you got them to smile.  They probably just figured you wouldn’t leave them alone unless they did what you ordered them to do.

And since she said that, she’s getting rape threats.  Because the internet is awful.

I’m going to say what she said, by the way.

You shouldn’t tell someone to smile when they aren’t smiling because you are almost always making them horribly uncomfortable.  Here are a few reasons why they might not be smiling:

You don’t know why they aren’t smiling!  Telling them to smile probably won’t cheer them up.

Now I’m going to sit back and watch all the rape threats not roll in.  Because I’m a man.

The ad was, of course, pulled. But seriously, who thought this was a good way to go? 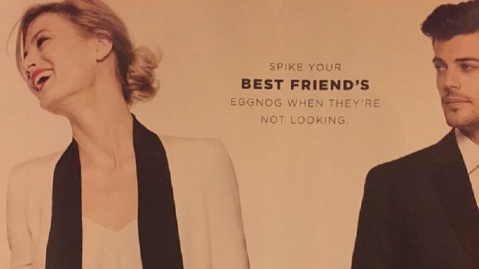 Now even if we assume this isn’t encouraging date rape, the ad is still problematic because it is telling you to make sure your best friend doesn’t know how much she’s had to drink.

So maybe she won’t realize she’s way to drunk to drive and will get pulled over, ticketed, and lose her license for a year all because you thought it would be hilarious to get her drunk without knowing.  I sure hope you are prepared to help her get to work for the next year because someone is going to have to do it.

I mean, I don’t know.  This isn’t the worst ad ever created.  But it sure is dumb.

It’s supposed to be a playful “baby it’s cold outside” kind of ad but it sure doesn’t come off that way.  That’s the problem.  There are a whole lot of people who had to approve this ad.  How is it nobody said “this is a really bad idea?”

Tags: Mormons, Shit that PIssed Me Off, Starbucks, War on Christmas