OK.  Maybe not everyone.  But let’s take a few examples.  Let’s consider the dude who shot up an abortion clinic last year.  In his story, he was the good guy.  He was saving babies!

How about that couple who shot up a Christmas party?  Totally the good guys.  They had been radicalized and convinced that the people at the party deserved to die. They believed god would reward them in heaven.

And what about the guys who shot a bunch of people at a Black Lives Matter protest in Minneapolis?  They genuinely believed they were the good guys when they decided to deride the protestors and brought their guns along.  Now they are just lucky they didn’t manage to kill anyone.

Remember how the Branch Davidians were a bunch of crazy child rapists until they set fire to their own compound and now everyone think they were the good guys? Or at least they think the Government were the bad guys?

If you think the government controls too much land and those poor ranchers should be allowed to graze on land the government stole from the native americans, you are probably going to think anyone opposing those dudes is a bad guy.  And if he has a gun, those dudes would be morally justified to shoot him in order to “defend themselves.”

If, on the other hand, you think those ranchers are occupiers and they should maybe use their guns to poach deer instead of pointing them at federal officers (in case federal officers ever give enough fucks to show up), you might think of them as bad guys with guns.

Really, though, they are just guys with guns.

Good guys with guns are a myth.  So are bad guys with guns.  All of them are just people with guns. You can think it is fucking awesome that those people have guns or you can hate it.  You can’t, however, really know which ones are the good guys because good is almost entirely a matter of perspective.

So let’s fix that NRA phrase a little and say “the only person who can stop a guy with a gun is another guy with a gun.”  Because that’s all they are really saying.

The argument is a complete straw man built around the idea that our safety increases in direct proportion to the number of people around us who are packing. 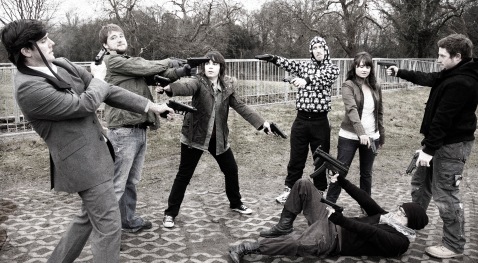 All of these people feel a lot safer right now.

Thing is, because we all think we are the good guy, guns really only make the person carrying the gun feel safer.  The rest of us really don’t know whether or not that person is a good guy because in this context, good is completely subjective.

Most crime is not premeditated.  That means that most people with a gun don’t believe they are going to use it to kill someone in anger.  Until they do.

The police are good guys with guns.  Until they shoot someone who didn’t pose any kind of immediate threat to life and limb and hide behind a badge to justify the act.

These acts may be random and they may be rare but how is everyone else supposed to know which person with a gun is safe on a particular day?  We can just assume they are all safe because most of them probably are.  But we still don’t know.  We can’t know.  Even if we think we know, what if today is their Falling Down day?

I don’t question that our country provides people with the constitutional right to have a gun.  I also believe that reasonable limits on gun ownership are fair.

I’m tired, however, of conversations that obfuscate the actual debate.  The good guy with a gun is a myth created to distract everyone from the real questions that need answering (like whether or not Obama pretends to cry about murder victims.)  I, like most everyone else, don’t have the answers.

But I can tell you that I, just like everyone else, believe I would be a good guy with a gun.  And that scares me.