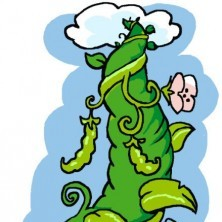 This week’s story started with the phrase “there are worse things than being poor.”

Typically, I haven’t worked with established stories or characters but when I started thinking about this one, I gravitated to Jack and the Beanstalk.  So I went with it.

Mind you, this story takes us into a much more dangerous world than one with giants and singing harps.

As always, these stories are all about exercising my writing muscle every week.  Please read, comment, share, and let me know what should change.

Jack climbed down the beanstalk calling for an axe.  His voice was urgent.  Desperate.  Green liquid was splattered on his face and arms.

His mother ran out of the house holding his axe.  The stalk still reached into the sky and she could barely pick out her son scrambling down at a recklessly fast pace.  But where was the gold?  He had promised her he was going to bring her gold.

So intent was she on what wasn’t in his arms, she took no notice of the hundreds of black figures moving down the stalk behind him.

When Jack reached the bottom, he snatched the axe from his mother and began to hack furiously.

“But why are you cutting down the beanstalk if you haven’t got any gold?”

“There won’t be any gold, mother.”

What a useless boy, she thought.  First he traded their cow for beans and now, he had squandered their chance to enjoy a life of comfort and luxury.  She leapt forward and pulled him away from the stalk.

“No!” She screamed with rage, “I will not let you ruin this chance!  I will not be poor any longer!  Useless boy!”

Jack was a strong boy and he threw her off roughly.  He had always been so gentle, this sudden violence surprised her.  She looked up at him and for the first time noticed the fear in his eyes.

“Enough, mother” he told her, his voice shaking.  “There are worse things than being poor.”

He turned away from her and began chopping again.  He tried not to look up.  He didn’t want to know how close they might be.  He just told himself to keep chopping.

“What,” she spat out, “the giant?  You told me you weren’t afraid of the giant.”

Winded but still working as fast as he could, Jack answered her between breaths. “The. Giant. Is. Dead!”

“You killed him?”  Perhaps he wasn’t so useless after all.

He swung the axe harder and faster than he believed himself capable of doing.  Just a little longer.  Just a few more cuts.

The stalk began to give way and Jack backed away. He was too busy watching the stalk fall to notice one of the creatures leap off and land on the ground behind him.

The creature was at least two feet taller than Jack.  It’s skin was an oily green and seemed to ooze a slimy liquid that quickly created a pool where it stood.  It had neither legs nor arms nor even a head.  Instead, it was a mass of thorn covered tendrils that was continually changing shape.

An unholy shriek came from somewhere inside the confusion of slime and appendages.

His mother cried out to warn him and Jack turned to face the creature.  Behind him the beanstalk slowly began to fall.  As it plummeted, other creatures would tumble to the ground and appeared to disintegrate as they landed.  Or it might have been before.

The thing that faced Jack was slowly turning black and as the change progressed, it was losing mobility.  But it was not dead yet.

Jack furiously chopped off one shoot.  And then another.  His strength was nearly spent after chopping down the massive stalk and he missed a third tendril that wrapped around his neck.  Thorns dug into his flesh as he gasped for breath, the axe dropping from his hands.

But the creature was dying. The tendril choking the life out of Jack turned to dust as the monster’s entire body fell apart and turned to a powder on the ground.

Jack stumbled into the house and slumped into a chair next to the kitchen table.  Blood ran from several puncture wounds on his throat and shoulders.  He was trying to breath more evenly but each time he took in a breath, it was a little more difficult than the last.

His mother followed him into the house, stunned.

“Mother, you have to listen to me now.  Their…power comes from the stalk.  You can’t let another stalk grow.”

The words were harder to form now.  He could feel the darkness closing in and there was something he’d seen in the sky.  Something she needed to know before…

That was mother, he thought, always talking when she needed to listen.

“When I die,” he continued, barely able to whisper “ you…have…to…burn……”

My body. You have to burn my body.

He tried to form those final two words but he didn’t have the breath to force them out.  His lips moved and his hands twitched for another moment or so but he could no longer see her.  His body slowly slid off the chair and onto the floor.

But he was already gone.

That night, she buried her son in the garden.  She believed that was what he would have wanted.

The next morning, another stalk had grown from his grave.  This time, the creatures did not wait.  They dropped from the beanstalk like rain and lurched across the plain to the village where they devoured everyone.

Over the weeks that followed, they controlled more and more of the countryside.  Six stalks now stretched towards the sky and each of them would spawn hundreds of children.

They were smart.  They took territory slowly and killed only those who resisted.  The rest they kept alive so there would be a steady supply of food. They never touched Jack’s mother.

They would always provide for their mother.

Jack was right.  There were worse things than being poor.