An Open Letter from a Conservative Jerkwad to Strong Female Characters

This was posted back in March but I only found it this week.  I’m sorry – I was slacking.

Basically, this is a crazy religious screed about why Rey is a terrible character because women are weaker than men (the Bible says so) and any time a woman kicks some ass (especially superior male ass), it’s lazy storytelling.  It happens all the time.  Except for nearly every fucking movie ever made.

Hey everyone! A man is here to save the day! How original!

He doesn’t just have a problem with Rey, mind you.  He’s also got problems with Furiosa, Ripley, and pretty much every other female character who wasn’t in need of rescuing by a man.

When he is talking about the obvious physical differences between most men and most women, you could almost give him a pass.  Then he says this:

It’s not just a matter of small bodies versus big bodies. Women are the weaker sex because they’re more timid and emotionally vulnerable and tender-hearted than men. God made them that way.

Oh, I get it.  You suddenly got a degree in psychology by reading the Bible.  Women are more timid?  How can they be when they have to put up with bullshit like this every day?

I’m sick of the “God created women to be this way don’t blame me it’s in the Bible/Koran/whatever the fuck religious book I happen to read” argument.  Talk about lazy storytelling.

A Christian Speaker Believes that Atheists Cannot be Grateful Guests

This article is just…

OK, look.  As an atheist, I have no problem with people who believe in god.  I’m happy to explain to them the reasons I don’t believe in their god if they want to know but let’s be fair – most of them don’t.  So that’s fine.

It gives me a headache, though, when a believer writes such an awful piece like this because it implies that atheists are just not very good people.  She says we can’t be good guests because we don’t realize that being treated well comes from god.

It further implies that atheists can’t be good hosts because we don’t have the divine guidance to make sure we clean the guest bathroom and provide some extra towels.

A world view that believes goodness can only come from god pushes aside the source of true goodness, which is each other.  And that annoys me.

I’ll give the kid a lot of credit because even though I always thought the pledge was annoying, I never would have called attention to myself by refusing to stand.  This kid not only called attention to himself but endured public shaming from his teacher.

He was then told (incorrectly) that federal law did not protect him from his teacher’s rules and the teacher in question is being supported by the administration for his verbal abuse of a student. 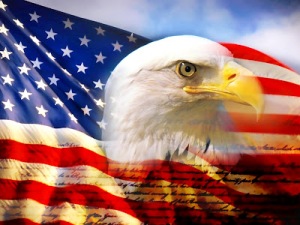 Maybe he would have stood up for the flag plus a BALD EAGLE AND THE DECLARATION OF INDEPENDENCE!

The flag is a symbol and oddly enough, it is a symbol of revolution and resistance.  We Americans cling proudly to the fact that we were disobedient and told our rulers to fuck off.

How ironic is it, then, that we throw a fit when a kid says “I’m not going to be forced to honor that symbol?”

Shouldn’t we be saying “Good for you, kid, you get it?”

A couple of dudes were planning their wedding and they invited friends and family.  One of those people is apparently an asshole because they sent a letter in return that said, in effect, you are deviant, I hate what you are doing, and I’m going to get a bunch of anti gay people to crash your wedding.

Which seems like the kind of thing God would want them to do.

The respondent was careful to avoid putting a return address on the envelope because they are a gutless coward in addition to being a homophobic asshole.

I get it.  You just don’t have the freedom to be a homophobic asshole in this country without being called out.  It’s rough.  You have to hide behind anonymous letters and threats.

You can’t just ruin someone’s same-sex wedding publicly any more.  You have to sneak around and do it covertly.

It is so hard to be intolerant these days.  I hope someone passes laws to make it easer.

North Carolina Governor Pat McCrory is under considerable attack for having signed anti-transgender legislation in his state.  He went on to “Meet the Press” to clear thing up by saying it was a bathroom privacy bill.

If he’d said “some of the transgender people I’ve met are very nice,” he couldn’t have sounded more patronizing.

It is the war cry of the oppressor that they are being oppressed when people speak out angrily against them.  Again, it is ironic that we use this tactic in a country born of revolution.

“Boy general, I sure hope nobody thinks we are fighting this war so transgendered people can use the bathroom that conforms to their gender identity!”

McCrory claims that these things need to be discussed and yet he admits that he didn’t discuss them.  Then, after bullying every city in his state to follow the rules he believes are appropriate, he argues that Hollywood shouldn’t be bullying him because they show movies in China and when it comes to human rights, China is pretty terrible.

Way to go, Governor!  You just defended yourself by saying “I may be discriminating against transgender people but at least I’m not China!”

Schilling is a conservative.  Which is not illegal.  He is a transphobe and homophobe, which is also not illegal.

He also had a job as a sports commentator.

I realize the cliche is to assume that the GLBT community hates sports.  Therefore, if you are a sports personality, you can just say awful things about them and they won’t care.

The reality is a lot more complicated and Schilling learned that when he posted a terrible meme about transgender women using bathrooms.  He then responded to criticism by saying others were intolerant of his views.

Again, the rallying cry of the bigoted seems to be that they are denied freedom of speech when the fact is they are not.  They fail to recognize that there can still be consequences.

Schilling is a victim of his own inability to recognize when he should have kept his thoughts to himself.  Or expressed them privately while drinking beer with his transphobic buddies.

Instead, he said what he thought publicly and he lost his job.  Believe it or not, that’s how freedom of speech works.

Andrew Jackson, who was a notorious bigot, has been on the $20 for a while.  Not forever, mind you, but for a while.

The treasury has done some number crunching and determined that women constitute approximately 50% of our population and yet they are represented on 0% of our currency.  At least the currency everyone uses outside of Renaissance Festivals.

So given the $20 was up for a redesign, they figured “let’s throw a woman on the bill – who can argue with that?”

Apparently a lot of people.  They argue that people have a problem with “tradition” and even though Jackson will still be on the back of the new bill, that isn’t good enough.  Greta Van Susteren has suggested that perhaps they create a new bill for Tubman and leave Jackson on the $20.

Susteren probably doesn’t know that it is really expensive to create a completely new kind of currency.  She also doesn’t care.  She just thinks that people can’t handle change.

Even though most people don’t think about what image is on the bill they are using to snort cocaine.

As a native Minnesotan, I can’t help but be affected by the loss of someone who was probably our most famous resident.

And I can’t help but be saddened that it took less than 24 hours for someone to start ripping on him for his flaws.

We all knew he was a Jehovah’s Witness and his views on homosexuality were, at the very least, vague.  He was kind of a misogynist.  He was eccentric and difficult to work for.

Basically, he was human.

But in the first 24 hours following the death of someone who had such a profound impact on a region and on music, perhaps we could let mourners mourn.

Prince was not perfect.  But some of his music actually was.  I think we should all spend a little bit of time appreciating how flawed people manage to create beauty and Prince created beauty in spite of, and perhaps also because of, his flaws.

Now is not the time to dwell on his shortcomings or berate others for ignoring them.

And finally, I wrote a short story this week about vampires.  You can read it here if you’d like.

Also, me and my compatriots at Geeks Without God have created a Patreon site to support production of the podcast.  If you are a listener, please consider supporting us!