Just a quick note: I was on vacation for two weeks so a few of the things that pissed me off this week are old. I didn’t want to forget about them, though.  So you’re welcome, I guess?

Let’s count all the ways this is wrong.

Guys – assume for a moment you are a weather person and you wear a shirt someone finds objectionable.  Or, you decide to do your morning report in a muscle shirt.  Do you think you’d get half the e-mails that this young woman did? 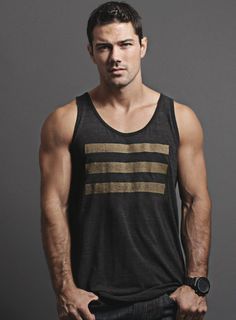 They would probably be trying to get his co-host to shove cash down his pants.

The fact people made it their business to whine about her dress should be embarrassing. To them.

It shouldn’t have been embarrassing to her.  Except it was because the station made the incomprehensible decision to fix it. On the air!

Point is, women in media are subjected to this kind of scrutiny all the time.  They have to think about every style choice they make because the “wrong” choice might just result in an embarrassing situation like this one.  Men in media basically need to decide which tie to wear.

People don’t send a lot of e-mails about ties.

I Stumbled Across this Two Year Old Blog About Comedy

The writer of the article basically says that she doesn’t think comedy is funny.

Which is fair.  I mean, comedy is completely subjective and some people just don’t find it entertaining.  It doesn’t mean they are humorless assholes.  It just means that they find humor and laughter in other ways.

Reading this article, though, is annoying because of way the author seems to be pretty smug about her opinion about comedy.  It isn’t that she doesn’t find comedy funny, it is that she finds other people’s enjoyment of comedy baffling.  She’s embarrassed for them and for the people trying to make her laugh.

And that’s why the article pisses me off.  It isn’t because I would never be able to make this person laugh.  It is because she is embarrassed for me for trying.  What I am doing is “stupid and beneath [her] as a human being.”

Yeah.  She said that.

Well look, person on the internet whom I don’t know, you don’t have to be embarrassed for me.  Nor do you have to laugh at me.

But I’d sure appreciate it if you didn’t judge me for trying to make people laugh and you didn’t blame other people when I succeed.

The anti-transgender part of the law is awful and should be an embarrassment to anyone who gives a fuck about people but it is important to realize the law went a lot further than just flipping the bird at the transgender community.

It also had a whole bunch of draconian pro-business shit that includes a provision that prohibits local governments from enacting”any requirement upon an employer pertaining to compensation of employees, such as the wage levels of employees, hours of labor, payment earned wages, benefits, leave, or well-being of minors in the workforce.” 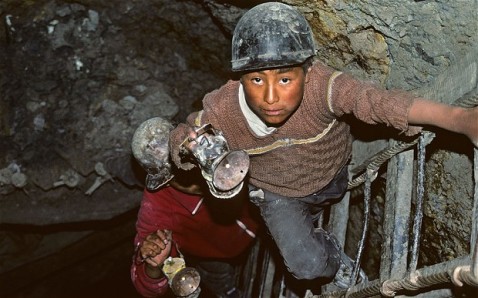 Literally nobody could exploit that kind of legal loophole! Right?

I mean most of that stuff is awful – especially when you consider that the Republican party is all about State’s rights superseding federal rights but apparently State’s rights trump municipal rights.

But local municipalities are now legally prevented from passing laws pertaining to the well being of minors in the workplace.

The transgender stuff is awful and I certainly don’t wish to make light of it.  However, it was a smokescreen to get people pissed off about one specific (horrible) thing while trying to make sure nobody noticed all the other horrible things.

Fucking Douchebag Gatekeepers Talking About Who is a “Real Geek”

I don’t know if you’ll be able to read the link because it goes to a Facebook thread.  Do me a favor and don’t engage this douchebag or his equally douchebag friend.  Because they are douchebags.

What angers me here is the basic concept that there is a right way to be a geek and they know what it is.

I don’t want to be too direct but they can go fuck themselves.

Let me tell a (super brief I promise) story:

Almost twenty years ago now, some local conrunners decided they weren’t happy with the people coming to their con.  So they changed some policies to encourage the “right” kind of fans to attend and the “wrong” kind of fans to not.

That’s oversimplifying but I said I’d be brief.

In response, I was part of a group of people who formed a different convention called CONvergence.  One of the central ideas when we formed that convention was that there was no right way to be a geek.  Whatever you were into was cool.  Just show up and have a good time.

Now we can argue all day whether or not the current convention succeeds at that basic mission.  I’d say that it certainly tries to succeed but because it is run by people who are fallible, it sometimes falls short of that goal.

So it pisses me off to see these two losers talking about “real” geeks at CONvergence.

Guess what, assholes?  Everyone at CONvergence is a real geek!  You know why?  Because they are there.

Note: the original thread has been taken down.  One can hope it is because the poster realizes they were a jackass.  More likely, a bunch of people told him he was a jackass and he was running out of ways to pretend they were wrong.

I know a lot of smokers and most of them are good people.  If they are bad people, it isn’t because they are smokers. This is not an anti-smoker tirade.  It is an anti-asshole tirade.

When I’m visiting a National Park (or really any natural park area), I make it my business to pick up trash.  I’ve always assumed that if I don’t like looking at garbage on the ground at the Grand Canyon, nobody else does either.  Most people just don’t lean over to pick it up.

Most of this garbage doesn’t annoy me because I try to believe it was accidental.  A kleenex just fell out of someone’s pocket or got caught by the wind, for instance.

Cigarette butts are the exception.  Because you have to make a conscious decision to get rid of them.  And assholes who are hiking a trail in Zion and just toss a butt by the side of the trail know they are littering and don’t give a fuck. 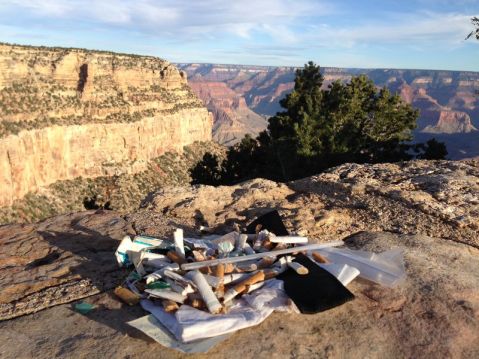 This experience just makes me feel so small! How can I ruin it somehow?

Now I know there are tons of smokers who pack out their trash and I’m not bitching about those folks.  I’m bitching about the ones who clearly tossed their butt in the dirt, crushed it, and just kept on walking.

I’m talking about the people who took a look at the Grand Canyon and thought “wow! This is amazing! You know what would make it more amazing? A cigarette butt! Fixed it!”

To be fair, most people who do shit like that probably take one look at the Grand Canyon and say “seen it.  Is there an Outback Steakhouse around here somewhere?”