Donald Trump Says There is not Drought in California

Even though California has been suffering through a worsening drought over the last few years, Donald Trump has been assuring farmers that there is plenty of water and when he’s President, he’ll make sure they get it.

I know that it is easy to say that Trump is just a politician making hollow promises but let’s remember that Trump believes global climate change is a hoax. Not wrong. A hoax.

So when he starts spouting conspiracy theories about the California water supply, it is entirely likely that he believes them. He believes that the drought isn’t really happening and it is just liberal, tree-hugging politicians who are to blame for the fact California farmers can’t water their crops.

This photo making it look like Lake Mead is at 40% of capacity is clearly created with gigantic mirrors.

And the more evidence he is shown to the contrary, the more likely he is to believe it is all a big fucking conspiracy.

This guy is going to be the Republican nominee for President.  His party is going to stand behind him because they have no choice.

And that ought to scare the hell out of everyone.

Actually, there was a whole series of Memes that pissed me off this week but this one gives you the general idea.

The basic problem a bunch of people seem to have is this: Obama went to Hiroshima on the Friday before Memorial day and apologized for the dropping of the atomic bomb, which dishonored our American soldiers who died in the line of duty.

So first off, he didn’t apologize.  He certainly didn’t condone war but he didn’t say “we are sorry for dropping a nuclear bomb on you.”

Second, he actually mentioned Americans being held captive who were killed in the bombing.  So he was not only honoring Japanese dead, he was honoring American dead.

Third, he was talking about civilian casualties.  Not soldiers.  So he wasn’t trying to shift the conversation from American soldiers to Japanese ones.

Fourth, it wasn’t fucking Memorial Day! It was several days prior.  He was laying a wreath at Arlington on Memorial day.

The timing didn’t dishonor American service men and women AT ALL!  Even as we honor people who died in war, can we acknowledge that they would have rather not died in war?

Especially when we say that pretty obvious thing days before Memorial day?

What bugs me about all of this is it is a manufactured controversy.  It doesn’t matter at all.

Oh, and one more thing. The Japanese who are alive right now aren’t our enemies.  So speaking to them about something that was done in WWII isn’t colluding with our enemies.  It is talking with our allies about a shared and tragic experience.

Holy fuck the outrage machine was working overtime on this one!

The Cincinnati zoo was forced to shoot Harambe the gorilla to prevent him from killing a four year old boy who jumped into the enclosure.  In the wake of this tragic event, we have all become experts on the situation.

We are all convinced that if we had a kid, we never would have let them out of our sight long enough to let them into the enclosure.  As a parent with kids who move pretty quickly, I don’t share that conviction.

We are all convinced that the zoo didn’t have the kill the gorilla to save the child.  Even though a lot of experts say differently.

PETA wants to convince us this is why zoos are evil.

But in the end, maybe we don’t need to point so many fingers.  They probably had to shoot the gorilla to save the little boy.  And yes, they aren’t very many gorillas in the world so that’s a tragedy.

You know what is more of a tragedy?

The fact we are destroying the habitat of gorillas so they can’t survive in the wild!  Instead of being upset because we had to kill a gorilla that was being kept in captivity, can we focus on the bigger picture of habitat destruction?

Do me a favor.  And I mean this.  If you want to blame the parents or the zoo or anyone else, go ahead and do so.  But before you do, make a $10 contribution to protecting the habitat of wild gorillas (I chose the World Wildlife Federation).  Because seriously, Harambe is dead.

That sucks.  But if you really care, you have to do more than blame someone.

He said vaccines cause autism.  He cited Andrew Wakefield, who is known to have falsified his results, as proof.

I don’t spend a lot of time addressing these wackadoos but the thing is it isn’t going away.  When there are documentaries being produced Wakefield and posing questions that already have answers, it isn’t like this crazy fringe group is getting smaller. 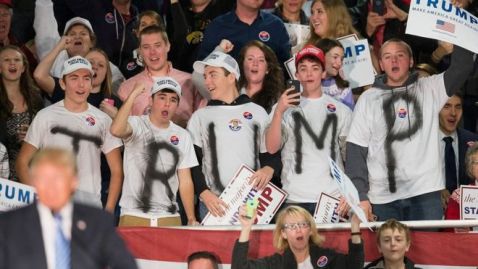 Remember when Trump supporters seemed like a fringe group?

Here’s the questions we should be asking:

Why is there no such thing as adult onset autism for people who get the flu vaccine?

Since the pharmaceutical companies are already losing money on vaccines, why would they be spending time and money trying to fund a global conspiracy to discredit Wakefield?

Even if Wakefield’s results were correct (and they aren’t) What is worse – polio or autism?

Given this clinic that is no longer vaccinating children also pedals homeopathic remedies, why are people going there in the first place?

I’m all for anti-Trump protests.  Because I think he’s an awful human being.

But look, physically attacking his supporters is not exactly helping create a clear distinction between them and you now, is it?

I’m sure that some of the Trump supporters were verbally abusive.  I’ll bet a few of them threw things too.  Problem is, nobody can tell the difference unless you don’t do the same thing.

It becomes a lot easier to say “all of these people are the same” if everyone is acting the same.

Trump isn’t the same.  He’s a bully and a bigot and he encourages his supporters to be like him.

So someone needs to get all these anti-Trump protestors in the same room and get them to understand one thing: focus the candidate.  Don’t attack the supporters.  Because the minute you start attacking supporters, people forget that their candidate is a tool.