A Senseless Massacre in Orlando

I pretty much have to lead with this, don’t I?  There’s no way to avoid talking about a killing spree in which almost fifty people were gunned down in the largest mass shooting in US history.  Although that depends on how you define mass shooting, as the internet has been careful to remind me.

As if arguing over the how extreme the slaughter was actually matters in the least.  Would it matter less if the gunman had only managed to kill five people?

The only thing that now seems to matter is that he was a Muslim.  Even though there is enough evidence to suggest that he was a homophobic man who was also likely dealing with a lot of self loathing because he was secretly gay, the narrative is all about his religion.

He may have wanted it to be that way because he pledged allegiance to ISIS during the attack. But that is the narrative he wanted.

Not a picture of the actual shooter because fuck him.

No matter what, we haven’t spent enough time recognizing that whatever he used to justify his act, he deliberately targeted the GLBT community.  This act of violence was done specifically to harm a community he found objectionable.  The reasons he found the community objectonable are irrelevant because there is hate speak coming from everywhere.  Not just Islam.  I’ll get to that later.

We’ll talk about all of this for a few weeks.  And then we will forget about it until the next mass shooting takes place.

At which point, we will only talk about the killer’s religion if they are a Muslim.

One note though: if you want to talk about gun control, or not gun control, or Islamic fundamentalism, or whatever else you want to talk about, that’s great.  And it is important.  But please do something tangible as well. there is a Gofundme campaign that has raised over 5 million for the victims.  I know it seems like $5 won’t make a difference.  But it will.  If you want to make a difference, please do more than talk. Contribute to the campaign or donate blood or do something to support your local GLBT community.  Do something.

So here we have an Islamic country with a significantly outdated legal system when it comes to rape and sexuality.

The issue here, of course, is not Islam but the use of religious laws as a basis for secular governance.  If ever you wanted to find an argument for the separation of church and state, look no further than a country where a woman could go to jail because she was raped.

I’m not going to use this argument as a reason to attack Muslims.  Rather, I’m going to use it to attack anyone who believes that the first amendment has nothing to do with the freedom from religion.  Because it absolutely does.

When you send someone to jail because they were a victim of a crime, you are doing justice wrong.  It doesn’t matter the religion that is the source of that action.

But in this case, the religion is Islam and the law is based on Islamic teaching.  It means that when a woman is raped in Qatar, that rape will most likely go unreported.  If it is reported, the result will be jail time instead of compassion and justice.

In the US, we are completely different.  I mean, we don’t usually provide compassion or justice but at least we don’t put the victim in jail.

Donald Trump Revokes the Press Credentials of the Washington Post

Trump had a stellar week.  His response to the Orlando shooting was an egotistical rant about how smart he was for predicting there would be another mass shooting in a country that seems to specialize in mass shootings.

Then he made up shit about what happened.  He said there were reports the killer cried “Allah hu Akbar” when there were no such reports.  He claimed the killer was born in Afghanistan when he was actually born in America.  He didn’t walk back these claims either.  Because he genuinely doesn’t give a shit if they are true.

You all don’t mind if I just proceed to make a bunch of shit up, do you?

In the end, his decision to revoke the press credentials of the Washington Post because he didn’t like a headline (they had already changed) is the most troubling sign in a man who would be President.

Sure, he can revoke press privileges.  They are his rallies.

But a man who wants to be the leader of America and doesn’t embrace the idea of a free press is a man who will systematically bar press representatives if he doesn’t like what they have to say.

If you don’t like what they have to say, you have the right to fight back.  By banning the press he doesn’t like, Trump is basically saying he’s only interested in those who think like him.

And if he gets the job, he will quickly work to shut out anyone who disagrees with him.  Not out of a sinister desire to silence opposing voices but because he literally doesn’t give a fuck what anyone else thinks.

I mentioned earlier that I’d get to this facet of the Orlando massacre.  The facet to which I refer is the Homophobic Christian pastors celebrating the fact there are 50 fewer gay people in the world.

Actually, pastor Steven Anderson, whom I’ve mentioned here before, said there were 50 less “pedophiles” in the world.

OK Steven.  Can I call you Steven?  I feel like I know you so well.

Anyway Steven.  First things first.  It is 50 “fewer” pedophiles.  Can you at least get that part right?

Because the part where you equate homosexuality with pedophilia is dead wrong.  And if you are going to say that the fifty (actually forty-nine) dead people were child molesters (and they fucking weren’t), you could do it in a way that is grammatically correct.

Anderson wasn’t the only Christian jackass who actually celebrated the attack in a sorry-not sorry kind of way.  I’m just using him as an example of the worst of society.

Well, he’s the second worst.  The worst would be the asshole who killed those people.

Oh!  I forgot about Trump!

It’s been a spectacularly shitty week so I’m going to close on a slightly lighter note.

Because a friend shared this melting Toht candle with me and it is spectacular.  I want one so bad, it makes me just a little bit sick inside.

But I have a problem.  And it is not insignificant.

What, you may ask, is my problem?  Well take a look at this picture. 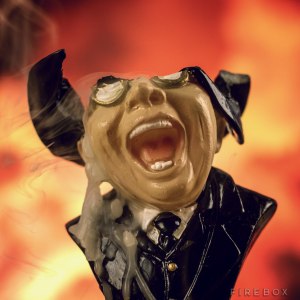 Any complaints aside – HOW COOL IS THIS???

Please note, my friends, that the wax inside the candle is not red!

Compare this with an actual picture of Toht’s face melting:

I think you see the fantastic missed opportunity.

I suppose it is for the best, though.  If I had a half-burned Toht candle that looked like I wanted it to look, I probably wouldn’t have very many houseguests.

And make no mistake.  I still want one.