I’ll get to the map in a minute.  First, I’m going to spend a few paragraphs being frustrated that it is going to be nearly fucking impossible to talk about Donald Trump for – well – at least four years.  I thought this week I’d try to avoid talking about him.  I wanted to find other news items to fill my blog.

Problem is, right now all the news is about Donald Trump.  And that pisses me off in itself.  I am definitely pissed that his cabinet and staff looks like it’ll be comprised almost entirely of old white dudes.  Some of whom are racist.  I’m not surprised, mind you.  I’m just pissed.

I’m pissed that Trump still sends out late night tweet storms because he’s the same fucking asshole he was before he was elected.  And now he feels like he’s been vindicated.  He doesn’t have to change who he is at all.

But I’m going to try to avoid talking about Trump for the rest of this week.  Let’s focus on this map, OK? 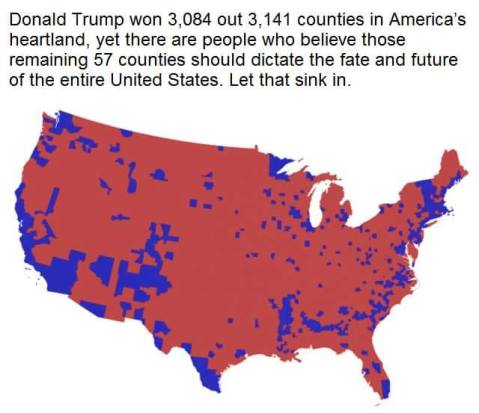 Let’s let this map sink in, as the meme encourages us to do.

I mean, this is all about the tyranny of those 57 bully counties.  They are just forcing their will on everyone else and that is horribly unfair!

Never mind that population wise, a lot of people live in those blue counties.  And if counties had to have equal populations we should split those 57 blue counties into a number that would, roughly, be the equivalent of those 3084 red ones.  Suddenly it doesn’t seem so uneven any longer, does it? 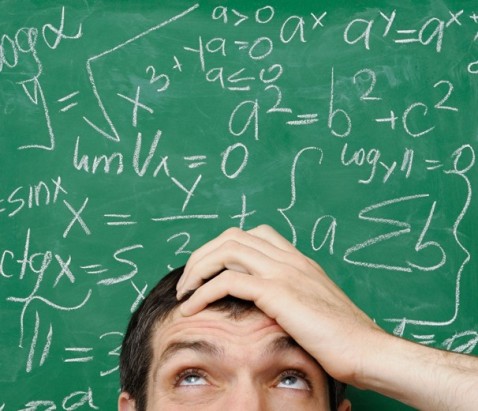 Here’s the other problem – when you make a county all red or all blue, you ignore the fact that there were people who voted for Clinton in those red counties.  And people voted for Trump in the blue counties.  So anyone in a red county who voted Clinton is basically shit out of luck as their wants/needs/desires are considered to be “red” while the wants/needs/desires of Trump voters in the 57 blue counties are considered to be “blue.”

The reality, of course, is much more nuanced. By using counties as your measuring stick and turning them red if Trump won by even one vote, you turn the electoral map into something that completely ignores the differing needs of our population.

We’ve read endlessly about how rural and urban populations want and need different things from our government.  And that’s true.  We don’t talk a lot about how rural populations are a lot more socially conservative and a lot more religious, which probably has more to do with all those red counties than the economic policies of a particular party.

This map and the commentary on the map suggests that because there are more rural counties, their wants/needs/desires are more important that the urban counties. 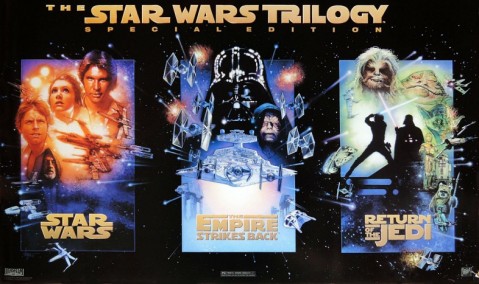 Those people are correct.

The majority can be tyrannical.  It can also be right.  And right is typically measured by whatever we already believe to be true.

It is meant to tell everyone annoyed by electoral college math that the math was fair because counties.

In the end, though, all of this is an effort to simplify something that is extremely complex.

I think the electoral college should be more representative of the popular vote.  But this map doesn’t argue for that.  It argues that whoever turns more counties a particular color should win.  If that’s how we want to solve things, we should just provide both candidates with a whole lot of paint.

This Article Written by Todd Starnes

Todd Starnes writes opinion pieces for Fox News.  I can understand if you don’t want to read this one.

He’s an asshole, by the way.  He’s smug and self-satisfied and completely incapable of recognizing his own bias.

It makes sense, actually.  I mean they will probably get more listeners that way.

One of the shows dropped to make way for endless renditions of The Little Drummer Boy was a show called “Freethought Radio” by the Freedom from Religion Foundation.  The show is still out there, by the way, it just isn’t being carried by that station.

Let’s be honest – would you rather listen to Rush [Limbaugh] and Sean [Hannity] or a gaggle of man-hating feminists in Birkenstocks warbling about the virtues of organic gardening.

Can I ask what it is about Birkenstocks that is so fucking liberal?  I mean, don’t conservatives like comfortable sandals?  Help me out, here.

And I don’t think he understand atheists very well since most of us are skeptics who are, in fact, pro GMO.

Anyway…Starnes is smugly reveling in the victory of Christmas music over a one hour atheist talk show.  I mean Rush and Sean are a lot more popular anyway and they have been for a long time.  They will continue to be well into the future.

So who cares if one atheist show is pushed out of one market because a radio station wants to be more profitable?

His side won this year.  And they have been winning for a while.  So why not just keep kicking the other side to remind them who is on top?  Talk about the tyranny of the majority.