I love/hate anti Feminist memes because they are all insufferably stupid.  Take this one: 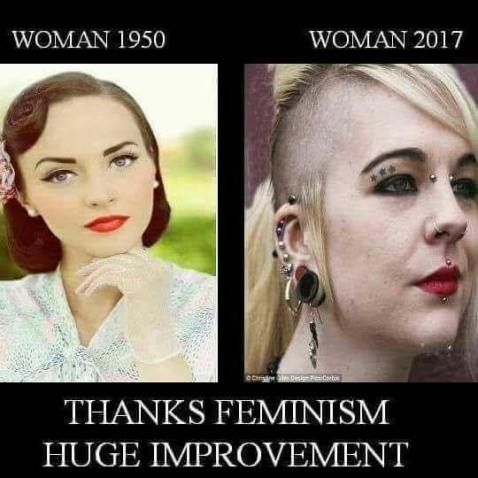 OH SNAP!  Clearly the 50’s woman was perfect and the modern woman is completely fucked up!  Because that is literally what every modern woman looks like!

Not that it would matter if that was what every modern woman looked like because fuck you and your standard of beauty, oh haters of feminism.  Not that the modern woman in this meme has anything to do with feminism.

And how do you know the young woman on the right didn’t alter her appearance to please the men in her life just like the woman on the left?  Both of them could be sacrificing their own identity.  Or, maybe, neither of them are. You don’t know.  You just grabbed a couple of pictures off the internet to basically say “damn, I wish women would just shut the fuck up and meet my standards of beauty and decorum because clearly we would all be a lot happier.”

Except maybe women but why the fuck should we care about that?

Last Saturday, an unarmed woman was shot by a police officer in Minneapolis.  Those are your basic facts.  Super basic.

She was a white woman and the cop is a Somali.  So what do you suppose happened next?

Well first up, Black Lives Matter joined in a protest about the shooting.  Because they don’t think any unarmed person should be shot to death by a cop.

And then the police union was conspicuously silent about the shooting.  Which is not typical as they usually vigorously defend the officer every time an unarmed civilian is shot.  Yet they choose to gag themselves when the cop doing the shooting isn’t a Christian.

I mean yeah, there was also the stuff about how we should maybe train cops better when it comes to keeping them from just shooting people through car doors.  But also, what are we doing letting Muslims be cops?  Look where that got us.

The worst of these responses, by the way, gets served up below.

I don’t know how this can get any worse.  A white woman got shot by a Muslim so the right is pissed.  A cop shot the woman who called them to investigate something in her neighborhood so the left is pissed.

A woman – her color is actually irrelevant – is dead and a cop is going to claim he feared for his life.  And then he will get off.  And then he might get murdered because a bunch of morons think he is a probably a terrorist because he is a Muslim who killed a white woman.

None of this is right.

Michele Bachmann Shares her Opinion of the Shooting

In the wake of the shooting above, former Congresswoman and Presidential Candidate Michele Bachmann gave a speech at a Conservative function.  In it, she suggested the officer involved in the shooting had done so for “cultural reasons.”

In fact, she also called the officer in question an “affirmative-action hire by the hijab-wearing mayor of Minneapolis, Betsy Hodges.” 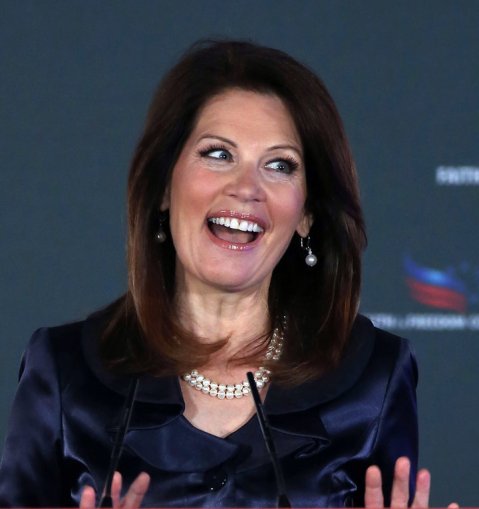 Well good on her for courageously standing up as a bigot.  I mean, she’s one of the most popular conservative figures in our state so she can totally embrace her own bigotry (also her homophobia – she forgot to mention that) and be content that she will still be puzzlingly well liked.

Maybe we should all be happy we finally have a police shooting that everyone can hate.

But Bachmann is on the right side for the wrong reasons.  She should be ridiculed and ostracized for being a proud racist.  Instead, she gets people asking her when she’s going to run for Governor.

Trump Corner: He Still Doesn’t Get That This Isn’t Really a Business

Some Trump supporters were super happy that he was going to be President because he would finally run the federal government “like a business.”

Ignoring for a moment that Trump is not a great businessman, the fact is the government is not a business.  A lot of the people working in government don’t work for him.

In fact, he doesn’t work for himself.  He works for the American People.  Same as everyone else in government.

So when Trump insinuates that Jeff Sessions, the Attorney General, should not have recused himself from the Russia probe because Sessions works for him, he misses one of the most important pieces of the way Government works.  That being the idea that the Attorney General has to follow the evidence and not the President.

The AG is not the President’s lawyer.  He is the people’s lawyer.  And while he is unquestionably going to purse an agenda set forth by the President, he should recuse himself from an investigation in which he has a clear conflict of interest.

What ultimately doesn’t make sense about Trumps vigorous attempts to figure out ways to fire the special prosecutor is that there’s a decent chance he didn’t do anything.  In the end, wouldn’t he be better just telling the truth and getting through it?

But that doesn’t fit Trump’s bully mentality.  He doesn’t sit by and let things run their course.  He bullies people into shutting up.  He can’t sit down and say “I didn’t do anything wrong so bring it on.”

Then again it is possible his attempts to undermine the investigation at every turn mean that he actually has done something wrong.

Or maybe he noticed that when people (like him) asked for Obama’s birth certificate and got it, they still didn’t believe it was real.  So when a guy like Trump, who is so comfortable lying you can almost envy him, tells the truth, nobody will believe him either.

Except all the idiots who hang on every word he says as if he was some kind of brilliant statesman when, in fact, he’s the dumbest person he knows.

What kind of world do we live in where President Pence would be some kind of sweet relief?

Lawyers Call a 12-year-old Girl a Murderer Because God

I probably shouldn’t write about this one because it pisses me off on an entirely different level.

For some reason, her parents aren’t giving consent.  Maybe because the dad is the one who raped her.  I don’t know.  That part is fuzzy since all they say is she was “raped by a family member” and she is twelve.

So her parents are assholes because they are going to force their pre-teen daughter to carry a child to term.  Her dad might also be an asshole because he raped his daughter but let’s stick with what we know. 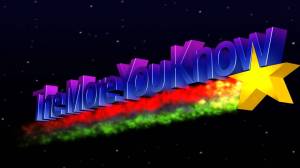 Because any parents forcing their daughter to have a baby after she was raped by a family member are bad enough.

The girl petitioned the state to allow her to have the abortion anyway because holy fuck, she’s a kid and she doesn’t want to have a kid!  Especially a kid who might be her half sister or bother.  Or her cousin.  Or, if she was raped by her brother, her own niece or nephew.  There’s really no way to make this sound anything but horrible.

Lawyers for the state have tried to stop her from moving forward with the procedure and that’s where things go from horrible to unjustifiably evil.

Because they go on record calling this kid a murderer and suggest she is not mature enough to make this decision.  Never mind that they think she is mature enough to be a mother to her own sibling.  Or cousin.

I get that the pro-life narrative is all about murdering babies.  It is horrifying language that triggers emotional responses and means the listener stops thinking about the mother and thinks only about that poor defenseless baby.  As if the baby is the only life that is a part of the equation.

And that is where these lawyers have chosen to go.  They have chosen to label a child a murderer because she doesn’t want to have the baby of a family member who raped her.

They really should say it that way so everyone understands the situation.  This isn’t just about a baby. This is about a scared little girl who has survived abuse and has made the remarkably reasonable call that she doesn’t want to be a mom.