With all the news of Harvey Weinstein and Ben Affleck and the fact we elected a known sexual predator President of the United States (fucking fuck), we should remember that this is all part of a culture that actually rewards rapists and sexual predators.

In this case, a 12-year-old girl was raped by a much older man and she chose to bear the child that was conceived as a result. Her body, her choice.

But when she applied for Government aid, she was forced to reveal the name of the biological father. And then that biological father took her to court for custodial rights. The prosecutor claimed the young woman had approved of allowing her rapist to spend time with his now eight year old son.

Thing is, she didn’t. And the judge didn’t fucking check.

Maybe they used some sort of alien mind control.

The whole story is out now and the judge has suspended the order pending another hearing but that likely means the young woman has to sit in court with her rapist just to explain why that fucker shouldn’t get parental rights to a kid who isn’t that much younger than his mother was when she was raped by his father.

All I’m saying is that women shouldn’t have to fight these fights, should they?

In England, a Young Woman Gets Shamed for Having a Period

At an office in England, a young woman was suffering from cramps. For you guys out there who don’t have menstrual cycles, cramps are one of several symptoms women suffer from as a result of being women. It’s really OK because, you know, it’s something they can’t control since they are – you know – women.  It’s biology.

Here – let me explain it this way, guys. Imagine you have a raging boner and you need to go to the bathroom. It is a lot more difficult to pee that way and things can get a little messy.

That wasn’t the best example, guys. How about this?

Have you had kidney stones? I’ve had a few. My understanding is that the pain caused by kidney stones can be comparable to what some women experience for several days every month.

So I guess my point here is this – if you are a dude who has problems with women having a period, you should mind your own fucking business.

Anyway, the gist of this story is that some guy in an office in England saw his co-worker with a hot water bottle in her lap because it helped relieve some of the pain from her cramps. This bothered him for some reason so he complained to HR. The HR representative told this woman that if she felt under the weather, she should take the rest of the day off.

Instead of telling this dude that women have periods. Sometimes they suck. And it’s a lot worse than trying to pee when you have an erection so fuck off.

I don’t know if you have heard about a video game called Castle Wolfenstein. Back in the day when I played it, it was a game where you were trying to escape from a Nazi prison by killing Nazis. Eventually, you got to kill Mecha-Hitler.

Well a new version of Wolfenstein is coming out. The game is set in America and, apparently, you kill Nazis.

Right Wing gamers (there are a lot of them) are pretty upset because…um…it isn’t OK to kill Nazis any more.

I mean holy shit. Do they want to protest outside a screening of Raiders of the Lost Ark because of the fact Indiana Jones punches a lot of Nazis? 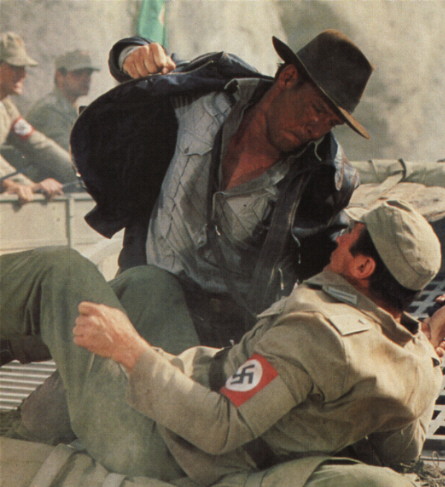 Yes – I know this is an image from “Indiana Jones and the Last Crusade.” Shut up.

I guess they are upset because of the negative backlash on the left against Nazi rallies. Because fuck those leftist bastards for opposing Nazis! Amirite?

I got nothing here. Nazis are bad. I mean Nazis are universally bad. I’m not saying we should all pack heat and just shoot anyone with a Nazi tattoo but, based on the history of the game, I’m guessing that the plot of Castle Wolfenstein is a little more detailed than “find Nazis and shoot them.”

Nazis are a universal symbol of hate for a fucking reason. A game in which we get to shoot them shouldn’t be viewed as leftist propaganda.

First off, yes. There were regiments of Black soldiers in the Confederacy. Most were slaves who were promised their freedom in return for repelling the northern aggressors who were, at least in part, there to end slavery.

Yes – it is much more complicated than that.

However, what is not complicated is the fact the Confederacy was all about states’ rights. To own slaves. And economic freedom. To own slaves.  The war was about slavery. Even if many of the soldiers for the Union didn’t realize it.

So when a legislator in South Carolina suggests that a monument to black confederate soldiers is an idea that really shouldn’t offend anyone, he doesn’t really understand the meaning of the word “offend.” He also probably doesn’t understand the word “anyone.”

Even as a lot of monuments to the Confederacy are coming down because they glorify racists who thought it was OK to own other people based entirely on the color of their skin, this guy thinks “well we can glorify the Confederacy by pointing out black people fought to support our cause because we bribed them.”

Slavery was bad. I mean, we should all be able to agree to that as quickly as we agree that Nazis are bad. The Confederacy wanted to preserve slavery. Romantic notions of the South aside, their economy was directly tied to slavery. So the Confederacy was also bad.

Our President, apparently too focused on Football players kneeling for the national anthem, just can’t focus on other problems.

So this week, he took to Twitter to say bullshit things like he always does. Weilding the social network platform like a – I’m going to say hurricane – he sweeps through issues and leaves nothing but devastation in his wake. He has no concern for who or what he might bring down in the process because, like a hurricane, he really only cares about what he wants to do and his actions have a far greater impact on the lower classes.

My analogy breaks when you consider that hurricanes fuck over men and women with equal vigor.

So this week, Trump pointed out that the federal government just can’t help Puerto Rico forever. I mean, come on Puerto Rico, it has been three weeks already! Get your shit together!

Trump has made no such declaration to Florida or Texas but of course, both Florida and Texas voted for him in the Presidential election.

I don’t want to assume Trump would be more likely to help states (or territories) that voted for him so let’s all see what he says about California in three weeks.

And I realize that my weekly Trump corner is really all about saying “look – he’s still a fucking douchebag.”

That’s fair. But to be fair to myself – he is still a fucking douchebag.

Look – I liked Bernie Sanders. I voted for him in the primary. So I’m not trying to say (as some have) that he is a horrible advocate for women’s issues.

But he does seem like the wrong choice to open a National Convention for Women. I will note here that he is not, as has been reported, the keynote speaker at the event.

I’m not saying he doesn’t have a place to speak there. I’m just wondering if maybe, just maybe, the first speaker should be a woman.

Putting a guy up there first seems to send the message that women need powerful dudes to get their point across.

Because what they are saying is “he’s not the keynote speaker! That’s a woman!”

And yeah, learn what the fuck a keynote speaker is, news organizations and members of the angrynet.*

Still, it seems like the wrong thing to be upset about, you know?  It seems like the response should be “oh fuck – you’re right! If we want to talk about women’s issues, we should put women front and center from the get go!”

I’m not going to claim that “Take on Me” was the greatest song of the 80’s because it wasn’t Dead Man’s party by Oingo Boingo (enjoy).

But man do I hate the soulful ballad version A-Ha performed on MTV Unplugged recently.

Now it’s their song. They can sing it any way they like. Honestly, I think they should add a horn section. But maybe I’m just too much a fan of horn sections. Like the one in Dead Man’s Party (enjoy)! 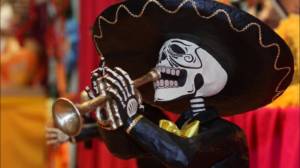 Is one skeleton with a trumpet a horn section. I say YES!

And yeah – I should just let people enjoy things.

So please, people, enjoy the slowed down version of a song that had one of the best music videos of all time.  Although it wasn’t as good as Peter Gabriel’s video for Sledgehammer (enjoy).

Which also had a horn section.

Anyway – I’m glad so many people seem to love a slow, boring version of Take on Me. I just wish I hadn’t listened to it.