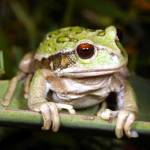 I wrote a piece for the Encyclopedia show this weekend. The topic was marsupials and originally, I’d planned on writing some mad libs because last week was a crazy week and mad libs are funny and easy to write. Also, audience participation is awesome!

So as I was doing research for my Mad Libs, I discovered marsupial tree frogs, which are a real thing. Zoologically speaking, they aren’t “true” marsupials for a whole lot of reasons that are not the least bit interesting or relevant here.

But having discovered the marsupial tree frog and being fairly certain I would be the only presenter at the show who talked about them (I was right), I decided to scrap my original, easy, idea and instead write a short story about all about a Andean Marsupial Tree Frog named Chloe. And zombies.

And so I did. And here it is. My inspiration was true life nature documentaries. And Andean Marsupial Tree Frogs

Chloe the Andean marsupial tree frog was having a bad day.  While her eggs were safely incubating in her dorsal brood pouch, she had other problems to consider.

Her habitat in Ecuador had long been threatened by human expansion but because she was a frog with limited cognitive capabilities or access to Wikipedia, she was unaware that this was the problem. She only knew that her montane forest home was shrinking and survival was becoming more difficult.

Today, however, the problem was not caused by the encroaching farmland that threatened the Andean valley in which her species had once thrived.  Instead, it was caused by the zombie horde that had already eradicated most of the human population.

For Chloe, this should have been good news.  It was the human population that had been steadily destroying the trees and ponds in which she lived. The human population had polluted the air she breathed, which was especially dangerous given the sensitive body chemistry of all frogs – even those who were not marsupials.

These dangers were soon to be a thing of the past. Of course Chloe didn’t know this because she was a tree frog and tree frogs don’t know very much that takes place outside of trees.

She was also fortunate in that the mysterious force that had been raising humans from the dead seemed only to affect that one species. If it worked on other species like – say – Andean marsupial tree frogs – Chloe might already be dead given some percentage of the young incubating in her dorsal brood pouch were likely to be stillborn and would, therefore, already be zombies attacking her from inside.

This disturbing thought did not enter Chloe’s mind, such as it was, because she neither understood zombies or, for that matter, species other than Andean marsupial tree frogs and their natural predators of which, she would have been pleased to learn, zombies were not one.

No, the zombies themselves were not what made Chloe’s day unpleasant. As noted, they would eventually make the survival of her species more likely given the destruction of the industrial expansion that had posed the most immediate threat. It was, instead, the surviving humans that had fled to the forests of the Andean valley in which she lived.

She had no way of knowing that this small band of survivors would, inevitably, turn on each other and, one by one, cause their own deaths at the hand of the ravenous horde or, more likely, each other. There had always been a shortage of movie theaters in the Andean valleys of Ecuador and of those present, none regularly showed zombie movies with which Chloe could have learned the tropes that accompany all apocalyptic zombie outbreaks like this one.

Even had they been showing such films, it is unlikely they would have been dubbed into Anedan marsupial Tree frog.

So given Chloe had no knowledge of the eventual doom these human invaders faced, she could only perceive the immediate threat they posed to her and her young.

Her young, you see, had been incubating for nearly six weeks and were almost ready to be born. As with all amphibians, they would be born as tadpoles and would need to live in water for some time before they would mature and seek to mate. Their mother would not remember them because she possessed almost no object permanence.

Right now, however, she was focused on their survival. She had picked out a satisfactory water source in which to deposit her brood and that was, coincidentally, the same water source currently being used by the small band of six human survivors and they were situated directly between her and the water. There would be five survivors by morning because the eldest survivor, believing their lack of speed and comparatively ill health to be a limitation to the group, would depart to draw the zombies away in an honorable but ultimately futile act of self sacrifice.

She had no way of understanding that this group posed no threat to her children or that her species would survive because at dozens of other water sources in the valley, hundreds of other Andean marsupial tree frogs were preparing to birth their tadpoles ensuring the survival of the species.

Chloe did now know this nor did she care. She was driving to ensure her own genetic code would continue to thrive and so, in a moment of great courage, she chose to hop towards the pond and give her offspring life.

Unaware as she was to her own mortality, she could not truly understand the threat she was about to encounter. She was driven almost entirely by instinctive fear and the hereditary need to reproduce. She hopped across the ground to the small natural water source fed by a rushing stream and filled with nutrients essential to the maturation of Andean marsupial tree frog tadpoles.

It was also filled with fish who would, without any ability to recognize Choloe’s endangered status, devour more than one third of her young before they had known a full week of life outside her dorsal brood pouch and more than three quarters of them before they would leave the pond for the relative safety of the surrounding trees.

To reach that threat to their survival however, she must first traverse the human survivor camp.

At that moment, the humans were arguing about the fact one of them had fallen asleep when they were supposed to be on watch, thus allowing the elder survivor to wander off unseen.

They were so distracted by the argument, they failed to see their comrade returning to the camp. Having been bitten by a zombie earlier that night, they had succumbed to death and were now a member of the brainless undead with only one distinct memory – a memory of a location where they could find food.

The zombie now shambled into their midst, causing a panic. The remaining survivors scattered in the camp, trying to find a weapon with which to stop the ravenous creature who, just like Chloe, now only wished to survive and propagate their own species.

The people running about the camp had no knowledge there was an Andean marsupial tree frog  hopping through their midst. They, like Chloe and the newly formed zombie, were thinking only of their own survival and, perhaps later, the propagation of their own species.

More than once, feet landed just inches from Chloe but she continued forward because she could feel that her young were about to be born and was forced by instinct and evolutionary necessity to continue her perilous journey to the pond.

A gunshot rang out. It startled Chloe momentary because she had never heard a gunshot before and given her position on the food chain, she was pre disposed to believe such loud noises were a threat.

A moment later, a body landed on one of her legs, breaking it.  While Chloe experienced pain, she was not capable of understanding the cause or the source so she knew only that it hurt to move one of her legs, making it more difficult to reach the pond.  Her movement slowed but she pushed onward with the only purpose she had ever or would ever understand.  Her own survival and pain were secondary to the needs of her young.

One of the survivors was now dead, having been accidentally shot instead of the zombie who had once been their friend.  More shots rang out and the zombie fell to it’s knees because it no longer had shin bones.

A survivor walked forward and placed a gun against the head of the zombie, aware that a head shot was the only way to neutralize the threat and also rightly believing that at that moment, they looked super bad ass.

Directly behind the zombie, Chloe had reached the pond and her progeny were emerging from her dorsal brood sack and swimming away.

One more shot rang out. The bullet went through the skull of the zombie, killing it, and emerged from the other side, striking one of Chloe’s front legs, severing it completely.

With one leg broken and another missing, Chloe could no longer move with any speed or grace.  She had, however, fulfilled the function her genes had programmed her to fulfill. If she had been capable of feeling satisfaction, this is when she would have felt it.

Shortly thereafter, the group of four remaining survivors discovered her and, because of her broken and severed legs, they reasoned the only humane act would be to kill her and roast her body for dinner.

After dinner, they paired off in an attempt to propagate their own species. But Chloe had already succeeded. In a hundred years, as a result of several genetic advantages that ensured her offspring were the fittest to survive, her successors would cover the Andean valley.  One day, over twenty subspecies would be able to trace their line all the way back to Chloe if genealogy and, in fact, all scientific study had not perished with the last of the human race.

Her descendants would be completely unaware of the hardships Chloe had faced on their behalf or of the slowly rotting corpses of the four survivors who had failed to save their species due to personal failings and petty disagreements or of the now starved zombies searching desperately for one last human brain on which to feed.

Chloe had been having a bad day. But, for the continued existence of Andean marsupial tree frogs, it was a good one.