OK, so a little perspective.

Last year, my band had a holiday show scheduled on a day that was forecast to have a horrible snow storm. Even though we didn’t know how bad the story would end up being, we chose to cancel the show and refund the tickets because driving was supposed to be dangerous. The snow happened but it wasn’t nearly as bad as predicted and we could have done the show.

Earlier this week, a gigantic storm was predicted by every weather service. The local school systems opted to close school slightly early and the result was a lot of busses trying to get kids home in the midst of the worst of it. Some children were stuck on busses until past midnight.

That, my friends, is a logistical failure.

Who (aside from every meteorologist in the country) could have predicted this would happen?

The issue here isn’t the fact kids got stuck on school busses. It’s easy to say “they should have known because they literally did know” but when do you cancel school? Before the storm hits? What if we only get an inch? So they tried to send kids home early once it was clear the storm was going to be as bad as predicted but the end result was they waited too long and some kids (and their parents) had a really shitty night.

Where they screwed up was in blaming the weather report rather than saying “we screwed up.”

The weather report was right. They didn’t act fast enough. They should simply blame themselves.*

*Note: Later in the week, the Superintendent of the St. Paul Schools sent out a very well worded apology that blamed their own shortcomings. So good for him.

Larry Nasser is a complete fuckbag who, over the course of a decade or more, abused over a hundred different girls (we know about) who were involved in the US Gymnastics program. This week, he was sentenced after four days of victim statements. 156 women either gave their statement in person or had it read into the record.

Nobody should pretend that these were his only victims. They were the ones who publicly stepped forward.

At one point, he said he couldn’t take it any longer. The judge in the case told him (far more politely than I would) to sit down and shut the fuck up because he was a scumbag and nobody felt even a little bit sorry for him.

Thing is, Nassar is just the criminal scumbag. There’s a long list of people who enabled his behavior even when girls were coming forward to tell stories of his abuse.

In her victim statement, gold medalist Aly Reisman called every one of them out. She pointed out that not a single member of the US Olympic Committee could be bothered to attend. The new head of US Gymnastics was present for only a few hours.

Young women had been telling stories of Nasser’s abuse for years and they were consistently dismissed and gaslit. For any jackass that worries about the consequences of some innocent guy being taken down by the current #metoo movement, I give you Larry Nasser. He was protected and enabled for decades.

Also, unless you want to read apologist bullshit from men who seem to think that 156 young women would be lying about their experiences, don’t read the comments.

Court Tells County to do Their Job after 40 Year

There’s a garbage disposal business on Hinds Lake in Hubbard County, Minnesota. It has been there for a long time and for that entire time, it has been breaking county zoning ordinances.

Now I know zoning ordinances are boring and business owners hate them because they should be able to do whatever they want but they are – you know – laws so people ought to follow them.

Especially when you are talking about a garbage business next to a lake.

What could possibly go wrong?

I don’t know about you, but I think it is reasonable to tell a garbage business that they shouldn’t be so close to a water source. Hubbard County – and one county commissioner in specific – didn’t seem all that interested in enforcing the law.

So they went to court to fight the residents who wanted the ordinances enforced.

I mean, wouldn’t the county have spent less money if they had just enforced the ordinance?

Maybe not. Maybe the garbage business would have sued the county for enforcing the ordinance and the county decided they would rather fight the residents because fuck people who don’t want garbage in their lakes.

So after forty years there is a ruling that is telling the county to enforce the law. And legally, they probably should. But when you’ve been resisting the man for so long, why back down now?

This one pissed me off because of the facts involved:

Why do banks do this? Short answer is because they can. Long answer is that holding on to tiny little amounts of cash costs them more money than they make off of them.

Except it doesn’t really. These are just numbers on a computer. We all know that, right? None of this is dollar bills in a vault. So when a bank says it costs them more money to keep track of a number on a spreadsheet, they are lying.

So banks don’t need to charge these fees. It doesn’t cost them a lot of money. They just don’t really give a shit.

So given that banks are fucking over poor people, their reasoning must have something to do with how awesome rich people must be, right? Uh-oh.

The Presidents Club is an English charity that holds an annual dinner to raise money for Children’s causes. It is a black tie event that is men only. So what could possibly go wrong?

Apparently, since they are calling themselves the President’s club, they need to act Presidential. As we in America have learned, acting Presidential involves uninvited fondling of any women who happens to be in your immediate presence.  These rich Englishmen have clearly studied at the feet of the master.

Hostesses at the event were told they had to wear high heels and were paraded around for the men to ogle. Then they spent the rest of the night dodging the hands of middle aged and elderly rich men who assumed that the thousands of dollars they had given to charity meant they could touch women inappropriately.

Just like our President. Only they were also giving money to charity. 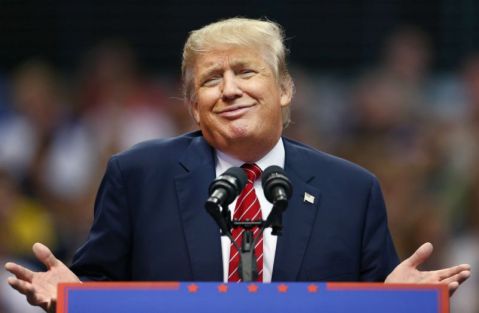 What do they want me to do with all of my money? Just give it away?

While this has been, presumably, going on for years, someone finally blew the whistle and the President’s club has been shut down permanently.

It’s strange. It’s almost like getting a bunch of rich and powerful men into a room together creates a dangerous place for women. If only this could be used as some sort of analogy…

I know what you’re thinking.

What the fuck is a “religious freedom ambassador? Is that actually a thing that exists?”

I’ll bet someone who used to be Secretary of State could tell me what it does.

Brownback is one of those right wing Christians who believes that religious freedom means telling other people how to live their lives in accordance with right wing Christian beliefs. As a Governor and Senator, he was working on constitutional amendments to ban same-sex marriage.

So one assumes that his work for the Office of International Religious Freedom will be focused on persecuted Christians in some predominantly Muslim countries and not on the wholesale slaughter of homosexuals in some African countries or the elimination of blasphemy laws that make it dangerous to say something as reasonable as “I’m not sure I believe in god.”

I mean, when basically every GLBTQIA+ group in the world says this guy is not really going to be looking out for their best interests, you’d think the senate could do better than a strict party line vote.

But that’s not how these things work. And if you are surprised Mike Pence was willing to break a tie given his history on these issues, you shouldn’t be.

Candidate for Missouri Senate Has some Choice Words for Feminists

Courtland Sykes is running for the Senate in Missouri. He’s running as a Republican.

When asked about his position on women’s rights, he published a screed on Facebook that said, in part,

I don’t buy into radical feminism’s crazed definition of modern womanhood and I never did…they made it up to suit their own nasty, snake filled heads.

He also said that he hopes if he has daughters that they will create their own home based businesses so they can raise a family AND be sort of empowered.  And he said that he expects to have a delicious home cooked meal every night. He did not imply he would be the one cooking it.

I’m sure that he’ll man the grill on Sunday afternoons during football season, though.

Clearly women can’t handle cooking of this complexity. I mean, there is bread, meat, and vegetables on the same surface.

Now I don’t know if Sykes is the front runner but here’s the big issue – his party doesn’t smack down this kind of thing to begin with. This backward idea that women saying they want the same rights as men and they don’t want to be viewed as just baby factories and private chefs is part of the party.

It continues to puzzle me why so many women want to vote for this party given the amount of respect it has for them seems to be pretty low. I mean, the Democratic party has it’s own problems in this arena but at least they don’t have as many candidates talking about how women should stay in the home and make them dinner.

Sykes might not end up being a Senator. But he is indicative of the rot at the center of his party.