Fringe is over for another year and while I shall miss it terribly, eleven days is a good length.

Saturday was only the second day of the Festival where I didn’t have a performance and Sunday all three of my shows closed, one right after the other. So on the final weekend, I didn’t see as many performances as I would have liked.

Much as I wasn’t thrilled about Fringe Central this year, I actually spent Saturday night there and instantly regretted having waited so long. I mean, I’m still not nuts about the Red Stag. But I got to talk to artists whose work I enjoyed and finally introduced myself to the new Executive Director.

It was all very lovely and while I didn’t much care for the Red Stag, I remembered why I really like Fringe Central.

So even though Fringe is over, here is my final batch of shows I saw/appeared in on Saturday and Sunday. Tomorrow, I’ll try to do a round up post.

Not Fair, My Lady! 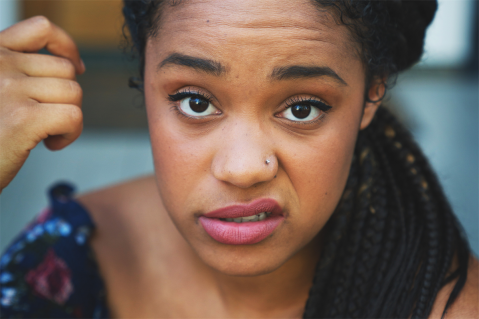 Watching this show will either convince you that something needs to be done about the treatment of women in musical theater or – gosh – you are a horrible human being, I guess.

Looking through the lens of roles for women in a lot of classic musicals of the mid 20th century that are still, for some idiotic reason, being produced, they point out the puzzle of being an actress looking for roles in musicals. I mean, you can love the music of “Carousel” but have you really ever thought about the play?

And what about that last scene in “Grease?” The one where Sandy changes everything about herself to get her man?

Maybe you knew all of this already. But the show doesn’t just point out the horrible misogyny in musicals you thought you loved. It points out how that misogyny manifests itself in the choices of the musicals that are produced, the types of actresses producers are willing to cast and the way women are treated at auditions.

We theater people think of ourselves as woke and yeah – I guess we are more liberal than your average non theater person. But most of us are still white and most of us are still gatekeepers when it comes to giving roles to people of color, women who are outside a very narrow age and body type standard, and recognizing that “Carousel” may be a classic but holy fuck is it awful.

The show was filled with great performances, emotional stories, and fantastic singing (of a lot of disturbing lyrics). The message was on point.

I was listening. I hope a lot of other people (in the position to do something about the problem) were as well.

Flipping off our Lord 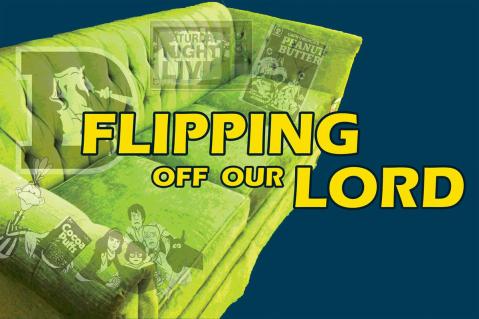 This one person show tells the story of a young, angry atheist forced to go to church by his mother and stepfather and how the Christians were nice to him.

It was a personal story about an alcoholic father and an atheism born not through honest thought but through blind acceptance of a father’s beliefs. And yes, it is a conversation story. Because it is a personal story, it is hard to be critical of the story itself.

It took about five minutes to figure out this was a conversion story and therein lay my ultimate problem with the show itself.

And yes, I have to admit that my bias as an atheist was showing. Because as soon as I realized this was a story about a young atheist being converted because Christians were nice to him, I lost interest.

If there had been a point where his non belief had been treated with the level of respect he treated the way others believed, I would have been happier. In the end, my issue wasn’t with the fact this young man found god but rather that he never was a very good atheist.

Revolt of the Beavers 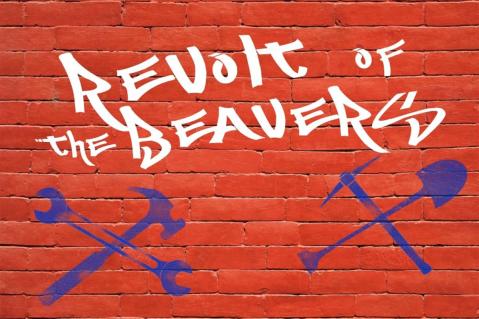 Revolt of the Beavers was an adaptation of a children’s play produced by the Federal Theater Project in the 1930’s. It was later attacked for promoting communist ideals.

This show was aimed directly at my socialist liberal heart so unlike the previous conversion tale, I had no bias against it. In fact, I was completely on board for the message of worker’s rights.

I admit, I was pretty tired by this point in my Fringing experience and I may have seen this show at exactly the wrong time. I needed something that was going to grab my attention and hold it. This show never managed to do that.

And as the target audience, I feel like it should have.

This show about tilting for windmills was a loose (very loose) adaptation of Don Quixote. The actors playing the roles of Don and Sam (Thomas Buan and Chase Adelsman) were terrific. They were committed to the show, to their characters, and if they dropped lines, I couldn’t tell.

The script left me on the outside. There was a moment where one of the characters beat up the other one because as a politician giving a phone interview, he answered questions in a way that was true to his beliefs but didn’t give him the best chance of being elected. Really?

The entire script was based around someone trying to speak up about what he believed and being blocked at every turn. It angered me because I think I was supposed to side with the people trying to block him (including his own brother) and I didn’t.

And if I wasn’t supposed to side with those people, why was the script so hostile against the person trying to speak his truth?

The performances were great. The script needed a lot of work. 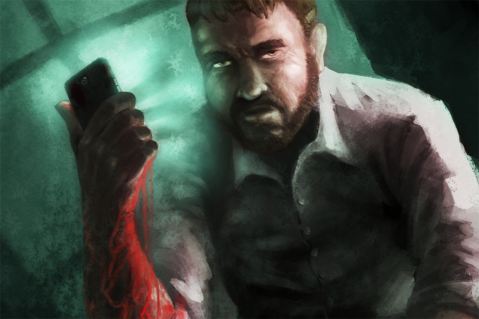 I’ve been watching a lot of horror this year because I’m getting to work on some horror ideas and really want to see how others approach the concept.

Jeremy Motz did a good job working with the genre in this play about a “nice guy” who is willing to do just about anything to be in a relationship except be the kind of guy women would like to date.

Signed up for what is termed an “experiment,” he is encouraged by what may or may not be a computer voice to engage in escalating acts of self harm. What is the reason he is being asked to do this?

When the end game becomes clear, the show makes a very pointed commentary on the world of Men’s Right’s Activists and Incels. The show does end a little abruptly but I’m not sure I could come up with a better ending.

And honestly, the response of “oh – it’s ending HERE? Fuck!” was probably a good response. So I retract the comment. 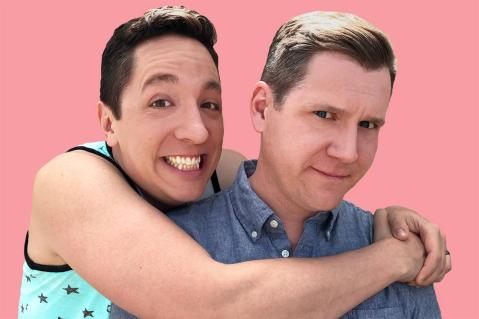 This year, we got the arguments but with music.

Which is a fine embellishment that worked well. Some of the songs were covers. Others were either original or covers of songs I didn’t recognize.

The only thing missing were the fights. A lot of the songs weren’t really about arguments as much as they were about unspoken misunderstandings.

And so what? Maybe there weren’t that many fights this year. The show was still funny and the music was well performed. Maybe these couples weren’t always fighting but they were singing.

We were promised a musical. And we got one.

Our final performance played to our largest and most responsive house.

Shatner has changed a little bit for me. In the last few years, Shatner has become a vocal opponent of SJW’s and, in general, kind of a political douche.

I mean, that’s fine, I guess. The guy can be whoever he is and it shouldn’t bother me. It does a little, though.

When I wrote the show, I respected him more. I respected him for embracing who he was and while he may not have always been the greatest actor, he never shied away from anything. That’s one of the central points the play is making.

So who he is has soured me on Shatner a little bit. But not on the message of the play.

A Family Friendly Pulp Fiction (Not Appropriate for Families)

Much like Shatner, our final performance had our largest and most responsive audience.

And I still am. But sometimes, comedy can get you to think for a few minutes. As I worked through the process of writing this show, I was thinking about tone policing and what we are OK exposing our kids to.

I wouldn’t show Pulp Fiction to a child for a lot of reasons. At the same time, I feel like we need to evaluate what family friendly really means.

So as much as this show made a whole lot of jokes about how you turn something like Pulp Fiction into a movie the whole family can watch, it also took some time to consider what that really means.

I’m grateful the rest of the people working on this show were willing to take that journey with me. 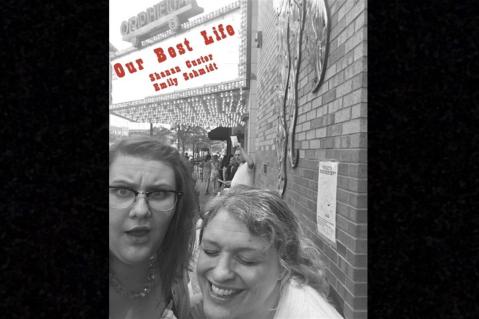 Shannan Custer, who is one of the most effortlessly funny people I have the pleasure to know, performed a two person show all alone (her co-star had to bow out for work reasons shortly before Fringe began.)

If Comedy Suitcase’s Slapdash Panic took a similar situation and turned it into a meta show about creating a show, Shannan just marshaled on and did a show.

She didn’t hide from the fact she was up there alone or from the fact she added a Q & A to fill time. But she looked genuinely delighted by the problem. Did she add the lip sync version of Kyrie by Mr. Mister at the last minute or was that always the plan?

Either way, it worked. 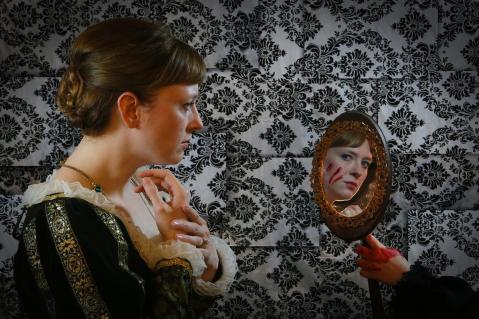 For the final show of the 2018 Fringe, I decided to watch my favorite show from the Festival. After the first viewing, I declared it one of the best works of art I had experienced.

On watching it again, I wondered, would I still think it was that good?

Yes indeed. I was sold on this show from the moment the actors on stage watched the Countess walk between them. It was a moment that drew everyone’s attention to the central character in such a dramatic way.

The staging is meticulous and must have required a lot of time to make sure all the pieces moved in harmony with one another. The use of music felt natural the title song is haunting.

This was just a great piece of work and I feel lucky to have seen it twice.