Whenever a movie comes out that some on the right term a “SJW” movie (yes that’s an actual term), a few things happen.

First, these folks decide the best use of their time is to artificially deflate the movie’s popularity by posting terrible reviews. Until rottentomatoes.com shut down pre-film audience reviews, they were already posting negative reviews of a movie they hadn’t seen. Now that the movie is out, they still haven’t seen the movie but are welcome to review the movie anyway and, as a result, Captain Marvel has a lower audience rating than Alita: Battle Angel.

Part of the butthurt comes from the time Brie Larson said that Captain Marvel wasn’t made for white men (except she didn’t actually say that). And while Arnold Schwarzenegger’s career is littered with films he didn’t make for women or people of color, when one woman suggests not every movie has to appeal to white dudes (although I must reiterate that she never said this), white dudes get angry. And when they get angry, they torpedo the Rottentomatoes audience rating! 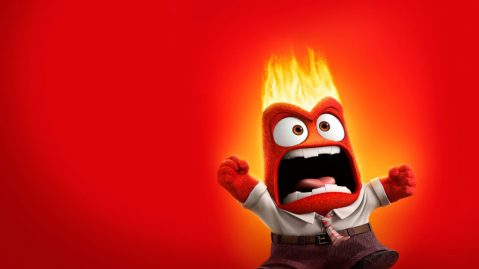 Why the FUCK won’t Hollywood make any movies for white guys???

In addition to using their massive power to bork what is, effectively, a poll on the internet, they are also complaining about everything wrong with the film. Included in these complaints are conservative Christians upset by a woman with agency, and at least one person who feels that the film emasculated Nick Fury because he is shown washing dishes.

Me, I see Nick Fury washing dishes and I think “what crazy fool allowed that man access to a fork” immediately followed by “oh shit – he’s also got a knife!”

But hey, if you want to get all upset because Fury, who seems to be single and probably does his own dishes and even his own laundry all the time, is somehow emasculated by cleaning up after dinner, then go ahead and do so. I’m gonna go watch Captain Marvel again to make up for one of these dickbags who isn’t going.

Not that the movie needed my help since it had the third biggest opening of any film in the MCU. Take that, rottentomatoes audience rating!

Trump Corner: Following an Airplane Crash, Our President Shows he Knows as Little about Air Travel as he Does About Everything Else

If Trump has proven anything in his time on Earth, it is that there is nothing about which he believes he doesn’t know everything. He speaks from an expert perspective despite not being an expert. About anything.

After a crash killed over 150 people in Ethiopia, he tweeted some mindless bullshit about too much automation and pilots needing to be able to fly their aircraft as if he knows a single fucking thing about what it takes to fly an airplane. Never mind that air safety over the last twenty years is way up (fatalities are down by 95 percent). There was a plane crash and it was terrible and that means Trump has to let the world know that he can solve the problem.

If only we’d listen. Problem being, of course, that a whole bunch of people do.

His narcissism means he lives in a world where he is right about everything. All the time. He doesn’t even have to do research on a problem to be right. He just is. And if there is incontrovertible proof that the is wrong, he just calls it fake news because he can’t be wrong.

It’s like if I walked into a coffee shop (I don’t drink coffee) and started complaining about how the biggest problem with coffee is that it’s all grown in the country of Paris and because the chief export of Paris (right after coffee) is bat guano, that’s why all coffee tastes like shit. Then I nod knowingly and if anyone asks me clarifying questions like, say, “isn’t Paris a city in France,” I just respond with more idiotic fabrications. “I’m not talking about the city of Paris. I’m talking about the country of Paris. It’s in Asia.”

It sounds like a joke. And if I did that in the middle of a Starbucks, everyone inside would rightly conclude that I’m crazy. When Trump says it, a whole bunch of otherwise intelligent people decide he’s right.

Green Book won Best Picture this year. For those of you unaware of what the Green Book actually was, it was a book published prior to the abolishment of segregation to let black people traveling in America know which restaurants and hotels would actually serve them. Now wearers of Make America Great Merchandise are worried that they face the same kind of discrimination black people have faced since this country was founded.

They worry that if they walk into the wrong restaurant wearing their MAGA hat, they might just be asked to leave. Just like black people were for decades. Only worse. Because they aren’t black. I mean, why even have privilege if you can’t enjoy it?

Now, they could just take off their hat before going to lunch but I understand not wanting to do that. My hair looks like shit when I’m wearing a hat so I usually end up just leaving the damn thing on rather than being concerned everyone is looking at my shitty hair. They aren’t. They are looking at their menu, their companion, their food, and a gazillion other things that aren’t my hair. But that’s my truth, OK?

Hat Hair – the struggle is real.

Of course some of these people are wearing T-shirts and it’s harder to take off a shirt in a restaurant. There are laws about that.

I also understand that everyone needs a safe space to eat. Even white supremacists. It’s hard to be racist on an empty stomach.

Honestly, I wonder who is more likely to download this app – the racists who support Trump or people who don’t support Trump and want to know where they can eat without being surrounded by a bunch of racists. It seems like a whole new Green Book.

The Minnesota House recently passed an amendment that would state “equality under the law shall not be abridged or denied on account of gender.” 55 members voted against it because of one word. Want to guess which one?

“Gender.” They wanted that word to be “sex.”

Yeah, that’s right. They didn’t want to pass an equal rights bill because they wanted to ensure it was worded to exclude transgender women. It will also hurt transgender men but given the language in the bill, the objection was almost exclusively aimed at transgender men.

Let’s think about the level of transphobia that is involved in refusing to vote for a bill pushing for equality between men and women because there are some women who shouldn’t be covered. Sure, we know that transgender women are more likely to be victims of violence than any other demographic and wording an equality bill to specifically exclude them would make that worse.

Anyway, if you link to the article, you’ll find the names of the people who voted against the bill. If you were inclined to let them know how you feel about their transphobia, go right ahead!

This one has been around for a while and it just bugs me. 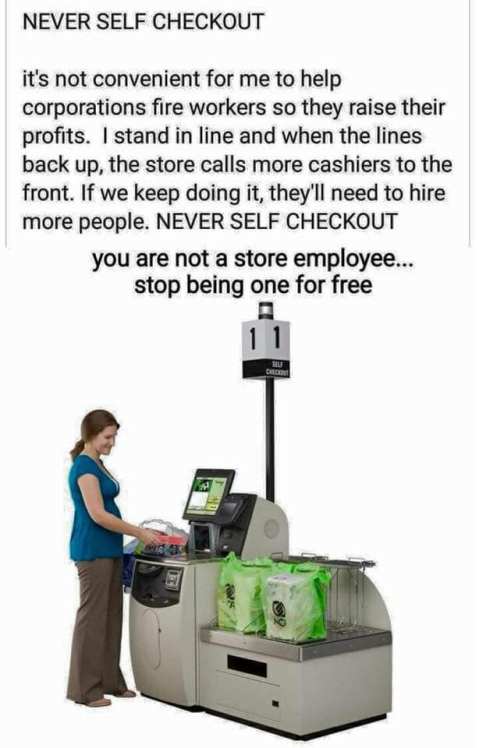 As a liberal, I know I should be 100% behind workers keeping their jobs. And I am. Sometimes.

I’m not for fisherman keeping their jobs if it means they will further deplete a population they have already fished nearly to extinction. They fished themselves out of a job.

And I’m totally for cashiers keeping their jobs. Don’t try to tell me, though, that I’m taking their job because I’m not. Before they installed the self checkout lanes, there were thirteen lanes in my supermarket. On a busy Friday night, you’d be lucky if six of those lanes were open.

When self checkout lanes opened, I was overjoyed. Because I can check myself out in about one minute instead of standing in line for ten or more. I don’t like standing in line with people I don’t know. I don’t like being in supermarkets. And I sure don’t like watching someone unload their cart one item at a time, filling up the entire goddamn conveyer belt with seventeen items because they can’t be bothered to leave enough space for mine so I can get checked out faster when it is finally my turn.

That same grocery store now has six self checkout stations. Two of which are almost always broken. Never the same two. Fucking fuck.

You know how many cashiers are working on a busy Friday night now? Eight. Because they still have six lanes open and they have two people working self checkout to help the idiots who can’t seem to figure out what a bar code looks like.

And the whole “you are not the store employee” thing may be true but it suggest that store employees are supposed to do everything. Nobody is making you use self checkout. You can stand in like behind that person who is buying enough ground beef to stock their freezer for a decade if you want.

Or you can do it yourself and you’ll get out of the store faster. I want to do it myself. I can do it better and faster than someone else.

Automation is a thing and until the global apocalypse, it isn’t going away. You know what is costing more cashier jobs than a self checkout lane? The internet. I can just go online and click on seventeen things I want from Amazon and two days later, I have them. I cost a cashier a job but I gave one to a driver and a warehouse worker.

Who get paid just a shitty as the cashier did. That’s the problem we should be trying to solve. The shitty jobs still exist even though I checked and bagged my produce on my own.

If you are a regular reader of my blog, you know a few times a year, I raise funds for my theater company, Fearless Comedy Productions. We are currently getting ready for our 50 hour comedy Marathon, Die Laughing.

Last week, I mentioned that if I could raise $500, I could get my own Porg hat! I made it! Thanks!

However, I’m working on a stretch goal of $750. If I can reach that goal before March 29th, my friend Breanna will make me a Porg cross stitch!

So if you enjoy my blog, donate a few bucks if you can. I’d appreciate it.