It was a long weekend and time for me to catch up on my Fringe Reviews!

On Friday, I spent the entire evening at Theater in the Round and I enjoyed all three shows. I also performed in one show. I’ll get to each of them in a minute. However, I have a general observation about performances in TRP.

It was where I was seated for all three shows and in two of them, I was actually a bit distracted noticing how the actors would deliver most of their piece to the south bank of seats and then do a slow turn to take in the people behind them before settling back in to deliver to the same group of people.

It was most notable in the anthology shows and I expect that may, in part, be a result of those shows not being rehearsed as a group so the director never really has time to critique something like where each performer focuses their attention.

But it’s something anyone producing in TRP should think about. The actors don’t really know how to treat being in the round without some guidance.

On to what I saw Friday night!

The Bisexual Unicorn and Other Mythological Creatures 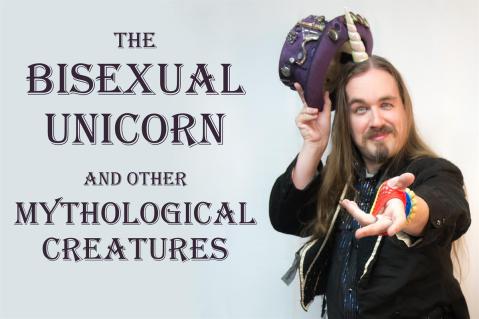 I call shows with multiple presenters on a single topic “anthology shows.” I don’t know if that is an actual thing but for future reference, that’s what “anthology show” means.

The message of this show, which is about living in a binary world when you don’t fit conveniently into binary categories, is an important one right now. Everything is framed as a series of circus acts which is, I think, meant to give us the idea that society views these individuals as freaks. So the goal is to normalize their experience.

And the show certainly does that. I’ve spent a fair amount of time trying to be more sympathetic to those who don’t fit into the convenient cis-het-white-dude bucket I inhabit but the thing is, this is all a learning process. There are always things I get wrong. Or don’t understand.

Shows like this lend visibility to the invisible. And that’s super important. This show is also very entertaining with a lot of humor, honesty, and some glass eating (which really did not sit well with a few audience members when I attended the show). I’m not going to call out any specific people involved in the show. It was an ensemble piece so I will simply applaud the ensemble.

Xena and Gabrielle Smash the Patriarchy

Basic premise: Xena and Gabrielle go to the future and find themselves at a convention that is suffering from a lot of toxic masculinity. Yeah, OK. I’m in.

I know the world of science fiction conventions pretty well. And even though, I’m told, writer Nissa Nordland Morgan doesn’t, she understood it quite well enough. The concept of toxic masculinity can be set just about anywhere but there’s something about conventions that can really distill the experience.

What is nice about the show is the way it also looks at how our patriarchal society works to pit women against one anther. It’s one of those subtle and horrible things a lot of us miss.

Oh yeah, and there are jokes. A lot of jokes. And a lot of inside Xena references.

So sure, you are receiving a little bit of a lecture about the problems with the patriarchy and toxic masculinity but you are also laughing.

And let’s be fair, we all need the lecture. More than once. If we can laugh our way through it, that’s a bonus.

Cat Confidential: The Secret Lives of the Mothers of Lions

Another anthology show – this one about women who own cats. Mostly it is about their cats.

I don’t really know how to review this one as I love cats and this is a show filled with amazingly talented women telling stories about cats. So yeah – I really enjoyed the hell out of it.

Some of the stories were sweet. Some sad. Some very funny. There were a few sketches thrown in as well. The whole show was super entertaining and I’d watch it again and again. It was better than “Cats.”

The only issue I had with this show was the blocking (discussed above). When the performers were telling their stories, they would tend to stand in the middle of the stage, face a bank of seats, and occasionally make a slow turn to briefly acknowledge there was an audience behind them. It would have been good to have them directed to move around more. To not just plant but talk to the audience, engage with the audience. And definitely to not forget the audience that was frequently behind them.

But staging issues aside, I don’t know how this show could be anything but delightful to people who love their cats. And to the dog people out there – I think you can relate. You’ll probably like it too.

But I was offered a part in Swan Song and I took it. Because on the occasions I get offered a part, I’ll tend to say yes (call me).

Anyway, the show is a whodunnit in the style of Agatha Christie and it has a truly tremendous cast of performers. Our opening was Friday night and, believe it or not, I actually still get a little bit of stage fright. What if I screw up my lines? What if I face plant because I’m a klutz?

It’s all stupid but it goes away as soon as I step on stage.

We had a good opening night. The audience was really responsive and I think they really enjoyed what we did. So go us!