Fringe shows can be good or bad or in between. That’s the beauty of the Fringe. Anyone can do a show as long as they can afford the producer fee.

I’m writing this as a preface to talking about a show that wasn’t just bad. Because bad is fine. You can learn a whole lot from bad. If you are aware of the mistakes you make, you can write a better show. Not everyone, however, is aware of their mistakes and that’s the way of the world. If everyone had the ability to fairly assess their own abilities, we’d all be a lot better at what we do.

Rarely have a I seen a show cross over the boundary between “bad” and “irredeemable” but I saw a show like that on Saturday. It’s super hard to look at a show by someone you know and say “this has crossed a line and there is no coming back.” You want to believe that they can rescue it.

But they can’t. There’s nothing to be done but to tell people the show doesn’t deserve support of any kind. I’ll get to that show soon enough. Here are the shows I saw/participated in on Saturday!

SIZE is an anthology show looking at the challenges of being someone who is bigger than other someones. It looks at fat shaming and how living with something other than the ideal body is a constant battle – especially for women.

Most of us are caught up with this issue. But we’ve only recently begun talking about how body image can be such a unstoppable emotional burden. Society tells us we need to be a certain size. If you are in theater, it is a lot easier to get a role if you are a certain size. We talk about loving our bodies but do we really love our bodies?

SIZE touches on all of these issues and many more. It is remarkably empowering because it involves some very fierce women speaking their truth. And that truth is something most, if not all of us, can relate to. 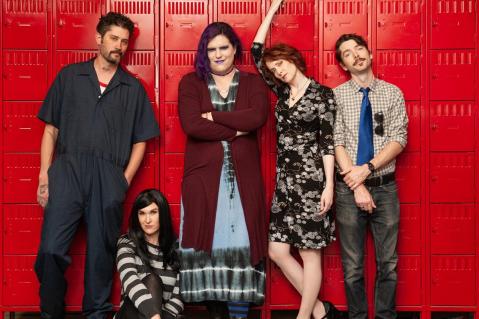 I wrote the show and I’ll be at every performance so you are gonna hear about it five times. Sorry. That’s just how I track these things.

When you write a show like this, audience is such a huge part of the experience. The show is a drama but it starts out as more of a comedy. Not a “five laughs a second” comedy but something that should seem a little light.

If the audience laughs and enjoys that beginning, they are going to respond better to the emotional beats that are going to hit later.

All of this is to say our opening night audience was cranked and laughed at everything and that was great. This performance, the audience was considerably more subdued and that made it a little harder to get a handle on their reaction. Apparently, we got some people to cry, though. So that’s super good, right?

Bad Thoughts with Wolfie B Bad

Wolfie B Bad is a bad show by a bad performer who had a bad idea. And if it was just bad theater we could leave it at that and move on.

Thing is, the show is worse than bad. Because in the show I saw, the performer groped an audience member without consent. So yes, the audience witnessed sexual assault. I’m not making this up. It was sexual assault.

What the performer failed to realize is that consent is not just about getting someone to say yes to a prompt. It is about making sure the audience knows what they are saying yes to. And it is about not putting that audience member into a situation where you have all the power. Then, even if you are asking for consent, they are not really in a position to give it because they are going to feel compelled to say yes!

Having assaulted an audience member in the first ten minutes, the rest of the show was simply an attempt to engage in audience interaction with a puppet. By a bad puppeteer.

Generally what would happen is he would ask someone what they did. He would then repeat what they’d said back to them and wait for a laugh that never came.

I don’t know if future performances will feature sexual assault. I have to hope they won’t. But I can guarantee you they won’t include anything even the slightest bit funny. This isn’t just the worst show at the Fringe this year. It is possibly the worst show I’ve seen at any Fringe.

A Confederate Widow in Hell 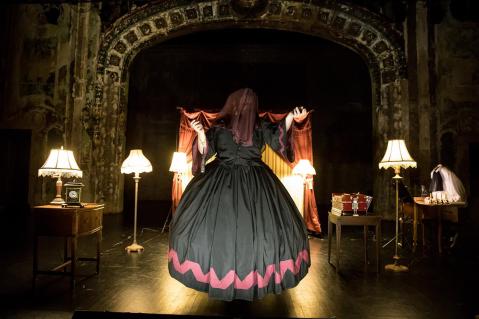 The Civil war is over. And yet, we are still fighting it. And losing.

A Confederate Widow in Hell is a (mostly) one person show in which the audience encounters the ghost of a southern plantation owner. She is genteel and charming and devout and a complete monster.

Yet, at the same time, she is the product of a society where she herself was oppressed. As we look at this nesting doll system of oppression, we see how the societal structures of her day and the structures of our day are not very different at all.

The show features two actors. One bears the most heavy burden of playing the protagonist. The other, a headless “assistant” who provides sound effects, lighting effects and a body that is put to some good use later in the show. Both are exceptional.

This apparition of our past is a difficult creature to see because she reflects our present. And that is what the show ultimately wants to show us. That the difference between the monster on stage and the audience is so very little indeed.

Kelvin Hatle has long produced some of my favorite shows at the Fringe. His wry, witty takes on life are often punctuated with moments of the absurd (Karate Elvis makes an appearance in this show) followed by moments that are touching and honest.

Uncle Danforth is a video will from Danforth Auslander-Fish, who has some things to say to his inheritors. It remains to be seen until the end of the show if he will ever actually get to the point. Along the way, though, he has a lot of thoughts about a lot of different topics.

Kelvin’s dry delivery means that jokes frequently wash over the audience. At first, a few people laugh and then more and more as everyone fully comprehends the depth of the humor.

He also finishes his shows rather late in the process. What that means is typically the final performance will be better than the first. I saw his first performance and thought it was fantastic. I an only assume those who have the pleasure of watching a later performance will see something even better. 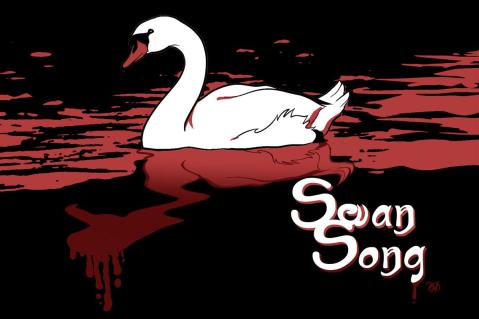 Our second performance of Swan Song featured an audience that was, much like the audience for Lunch Bunch, a little more subdued. Or they simply latched on to the creeper aspects of the show a little bit earlier.

I have to shout out to our director for this show. I have worked with Jason Kruger before but only as a writer and a director. As a director himself, he has the ability to really figure out how to give actors notes that help them improve their performance.

Those directors are hard to find. I’m not sure if he knows how good he is. Someone should probably tell him.

Stuck in an Elevator with Patrick Stewart II: The Wrath of Fandom

OK, this is going to sound weird coming from a white guy who frequently includes commentary on social issues in his work.

This show seemed so much like a play written by a white guy making commentaries about social issues. I don’t think that is bad. White guys should notice and comment on social issues. They should come up with ways to lampoon and belittle Incels and Men’s Rights activists because – and I don’t use this term lightly – they are trash.

But this show was a white guy lecturing his audience. It badly needed a woman’s voice. The Incel had a sympathetic backstory because this show is a sequel and in the first show, he was our protagonist. I didn’t see that show but there were enough references to it that I couldn’t help but wonder how someone who was a fan of that show would feel about seeing a character they liked being turned into such a jackass.

Patrick Stewart, who is a well known women’s rights advocate, was written to completely miss the Incel in the room for the longest time. And the Incel in the room was given enough history to make us care for him when the message needs to be “who gives a damn what made him this way because he’s just trash.”

The woman in the room had to carry the burden of confronting the Incel. She was the one who had to do the hard work.

There was also a secondary story that really had little to do with the main storyline and used up a lot more time than it needed given how little actually took place.