I took Monday off of Fringe entirely. I typically take one day off a year if I can. Fringe is a hard fortnight and if you don’t give yourself a little time away, it can wreck you. Or at least it can wreck me.

I expected this would be a light evening as well. I had a meeting that was going to take up one time slot, I was performing, and I didn’t think I’d make it in time for a 5:30 show. As it turns out, I made it after all!

We are reaching the point in the Fringe where the shows I know I want to see, I may not actually be able to see. Timing doesn’t work out. Or the show is very good and is in a small venue and I’m not going to be able to get in with my artist pass.

Which is fine. I’d rather a producer had a paying customer instead of me. It sucks that I don’t get to see shows I’m really interested in seeing but that’s the way the lottery ball rolls.

Here are my thoughts on the shows I saw Tuesday night! 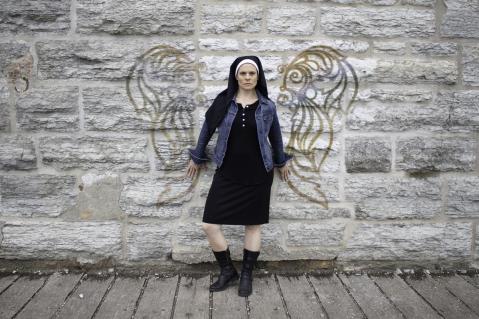 This adaptation of one of Shakespeare’s lesser known comedies was performed by a cast of women and, while it stuck to the original (abridged) text, it calls out some of the more problematic lines in the play. A brother asking his sister to sacrifice her virtue in exchange for his life, for instance.

The cast is stellar and I haven’t seen Mo Perry on stage in a while (I’m sure she has been on stage – I just haven’t seen what she’s been in) so that was definitely worth it.

The biggest issue I had with the show was in the difficulty I sometimes had understanding the language. Trimming a Shakespeare play to under an hour meant the actors were sometimes rushing their lines to get everything in and Shakespeare suffers a little when the language is rushed. The Southern also has a tendency to swallow up dialogue a little and this was a play where you didn’t want the dialogue swallowed.

The cuts to the script were very smart and kept things focused very intently on the way the men in this play treat the women in the play. Even the sympathetic ones. Yes, Shakespeare was written in a different time but I think the point here is that this kind of behavior isn’t new. It was a clever way to take something that already existed and change the audience’s perception of that material.

I haven’t mentioned up to this point but Swan Song is written and produced by a first time Fringe Producer. It is really easy to get caught up in finding shows by producers whose work you’ve grown to love but first time producers are the future of the Fringe.

Cara has put together a tight and suspenseful story of…well I probably shouldn’t say. And she’s filled with enthusiasm for getting other people to see her work. She’s wandering around Fringe with a stuffed swan and postcards at the ready. I remember what that was like.

It’s great to see the new producers trying like hell to get an audience in front of their work. Someday, many of those producers could end up being the next Josh Carson don’t miss Fringe star.

I’m not saying that being a Fringe Star is the end all of existence (sorry Josh) but for those of us who really love this time of year, the unexpected is just as exiting as the expected.

This show is exactly the kind of concept I could see myself writing. A classic radio show that slowly develops a life of its own sounds like a really wonderful concept.

What the show lacked, I think, was urgency. I wanted things to be more manic. More out of control. The moments where it felt like the show might go there, everything was frustratingly reigned in.

I would have liked to see things start out as an actual radio play and slowly devolve into the real adventure except the characters continue to be aware they are in a radio play. That, of course, is my mentality as a writer being projected on to someone else’s work.

Another issue that was not the fault of the show was the fact one of the leads was played by an understudy reading from a script. That happens. I don’t know why the original actor was unable to perform but I’m certain that a lot of the timing was thrown off as a result. There were also a couple of actors who were hard to hear, which is actually something of an accomplishment in the Rarig Arena.

I should mention that Laura Bidgood as Tess Jones was delightful and I love her.

I should also say I thought a lot of the writing was clever but some of the delivery meant it ended up falling flat. This is where a crispness to the show would have helped.

The show has a lot of promise as an idea. I feel like it only delivered on part of that promise. But I think I would be interested in seeing it again with a full cast. Nothing against the performer who gamely stepped in to take over, but I feel like I didn’t see the show that I was supposed to see.