The big news of last week was Roseanne Barr’s popular sitcom being shut down because she tweeted something seriously racist.

For those unaware of what she tweeted, I’m going to show you. This is in reference to Valerie Jarrett, who is black:

It’s important to understand that comparing people of color (specifically black people) to apes is not just kind of racist. It is part of a long history of dehumanizing black people.

So what she said wasn’t just a “misstatement,” it was racist as fuck.

Barr has made racist statements in the past and has been publicly supportive of Donald Trump (as is her right), who is also a racist. And a sexual predator. We shouldn’t forget that Trump is a sexual predator.

This one, however, got her fired. And that doesn’t piss me off because free speech is not consequence free speech.

It does piss me off that a whole lot of other people are out of work because of what Barr said. Now, that’s the way this shit goes sometimes. They all knew Barr had a tendency to say outrageous things and they took that risk. The likely assumed the fact the show was enjoying high ratings might protect them from all but the most egregious things their star might say online.

Bad news: She said the most egregious thing.

Still, in the midst of liberal dance jams celebrating the fall of Roseanne, remember that our racist in chief is going to give Roseanne a golden parachute of some kind because he has shown the unending capacity to reward those who show him loyalty. Like Dinesh D’Souza.

So while Barr will carry on supported by the most nepotistic President in history, the rest of her cast and crew is out of work. They will find other work. But let’s remember that when Barr took herself off the air, she got a shit ton of other people fired in the process and they are not as likely to enjoy the love of the right Roseanne will enjoy.

Of course, a side effect of Trumpism is what John Oliver calls Whataboutism (he didn’t originate it but I heard it from him so I’m giving him credit).

Since Roseanne Barr got in trouble for being a racist, the right has immediately started looking for left leaning celebrities to punish. While this is fallacious reasoning, they don’t care. They can’t blame Barr for being racist so instead they want to find someone they can point to as a liberal who didn’t get punished for doing the same thing Barr did.

This allows them to remain the victimized underdog despite the fact they control all three branches of the Federal government, most governor mansions, and most state legislatures.

So what they came up with was Whoopi Goldberg and a shirt she was “wearing.” 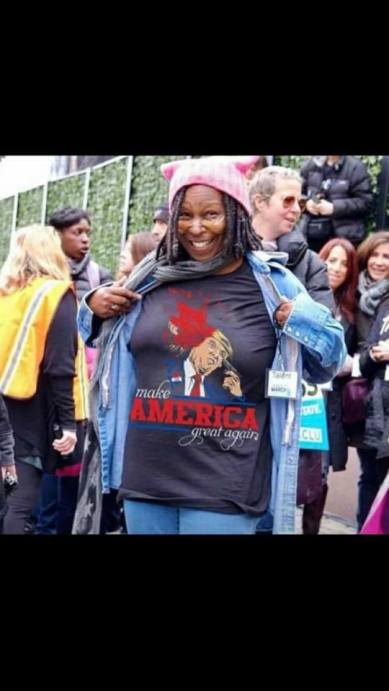 I put “wearing” in quotes for a reason. The reason, of course, is that this image is a complete fucking fake. You can actually tell it is doctored if you know anything about doctoring images.

But that really doesn’t matter. What matters is to switch the conversation from Barr being a racist to Goldberg wearing a horrible shirt about Trump killing himself.

And let’s be clear – while I believe all of us (especially people of color) would be a lot better off if Trump was not our President – I don’t want him to shoot himself. I wouldn’t wish that on his family any more than I would wish all of the people working on “Roseanne” would lose their jobs because their star is a racist shitbag.

When you point out this photo is doctored to conservatives, their response is basically “yeah but she probably wore something that offensive at one point and besides whatever you used to find the proof it’s fake has a liberal bias because we conservatives are persecuted and that’s why we control all three branches of the federal government, and most governor’s mansions and state legislatures.”

They don’t care. Even though the most un biased proof in the world is just looking at the picture. It’s doctored! Holy shit! Are you willfully blind or actually blind?

Later in the week, conservatives shifted their attention from the fake picture of Whoopi Goldberg to a real thing Samantha Bee said on “Full Frontal with Samantha Bee.”

In talking about immigration, Bee called Ivanka Trump a “feckless cunt.” She has since apologized because it was a poor choice. It wasn’t very funny. And when you are a comedian, being funny is top priority.

Barr should realize that as well.

Cries have gone up for Bee to be fired because, you know, double standard liberal bias blah blah blah. I mean, Barr apologized, right? And she got fired. But Bee didn’t. Yet. LIBERAL BIAS!

Now let’s understand the difference between racism and calling the President’s daughter a bad name.

One is racism. Full stop.

What Bee said was pretty stupid. Her and her writers had opportunities to make a different choice. They probably thought they were being edgy. But they were just calling Ivanka Trump a name. A really horrible name. A name that really didn’t do anything useful.

I, for one, would like to take a moment to speak out in support of the word “feckless,” which is brilliant.

The right suggests that Bee’s apology is disingenuous because she had to know what she was doing when she said the word.

And yeah, she did. I’m a comedian. I’ve performed in some really offensive shows and when I’ve said offensive stuff. I knew what I was doing every time.

I’ve also crossed the line and been called on crossing the line. And I apologized.

Should her show be cancelled? Probably not. Because getting it wrong is different from being a fucking racist.

In the end, though, none of us are talking about racism. And if we can really get to the heart of what pisses me off about all of this, it is that last bit.

What Barr said was racist. Comparing a black woman to an ape is racist and demeaning.

Barr has been racist for a long time. The people supporting her (specifically Trump) are also racist. They don’t like it when people point that out because being racist is bad. And it should be.

Tone policing what Bee did just takes attention away from Barr being a racist.

So what we aren’t doing is talking about racism. Barr had the number two show in the country and she’s been racist for a long time. This time she crossed a line and couldn’t walk back to the other side.

But she’s going to be rewarded for that racism because the most powerful man in the country is a racist.

People should lose their jobs for being openly racist. Trump should never have been hired in the first place because he is openly racist.

So please, let’s forget about the fact that Samantha Bee made a bad joke at the expense of the President’s wealthy, powerful, and attractive (to the President) daughter. Because Ivanka Trump can take it.

I mean seriously, stop worrying about Bee’s language choices for a moment to recognize that at the end of all of this, Ivanka Trump is doing just fine. You want to be offended on behalf of anyone in this entire endeavor, how about being offended for Whoopi Goldberg because she’s the only person who didn’t do what people are accusing her of doing. She’s also the only person of color.

You know who isn’t doing just fine? People of color in America. Because our President is a racist and he’s going to give Roseanne Barr a job while all those other people who worked with Barr, most of whom are not racist, won’t get a call from the white house.