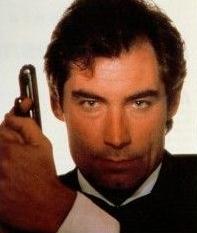 I liked Timothy Dalton as Bond.

There.  I said it.  I realize that I’m going to catch hell for it but a guy has to be honest.  I think that Dalton got a bad rap as Bond.

I’m not talking about the movies he was in, by the way.  While I like both of them and I think they are certainly better than the worst Bond films (almost all of which starred an aging Roger Moore), they are both mediocre at best.

Nor would I say Dalton is the best Bond.  I’d give that distinction to either Connery or (depending on how the next movie turns out) Daniel Craig.

Right now, though, I ‘m just talking about how Timothy Dalton played Bond .  I loved what he brought to the role.