I had a big weekend what with all three of my shows opening on the same day.

Now I know what you’re thinking – three shows?  What the hell Tim, are you some kind of attention whore?

Um…yeah.  I mean I’m a writer and a performer.  I can’t get around the fact that I like to put things in front of an audience.  Sometimes those things include myself.  I like it when people pay attention to that stuff. And while I didn’t set out to be involved in three shows, when the opportunity presented itself, there was no way I could say no.

I’m totally OK with the fact these people want my attention.  Because they deserve it. 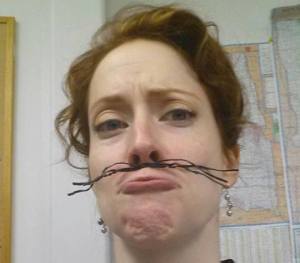 Dawn is one of the most gifted actresses I know.  When I ask her to work on a project with me and she says yes, it makes me feel like I’m doing something right.

I first became aware of Dawn when she took part in a short film I helped write for CONvergence a few years back.  I was working on a totally different part of the film so we never actually met.  When we finally met at the convention, she was the nicest and most gracious of people I could have imagined.

I’ve never seen Dawn treat anyone poorly in all the time I’ve known her.  She is genuinely friendly and interested in whatever others have to say.  She’s also game to try just about anything provided she has the time.  Which she often doesn’t because why wouldn’t you want her to be part of anything you were trying to do?

As an actress, she typically nails exactly what I need the first time she reads something but whenever I ask her to make a change, she understands what I want and makes the right choices every time.

What surprised me was to learn how good she is as improvisational comedy.  She’s so good at everything else, I guess it shouldn’t have come as a shock.

There is a love for performing in Dawn that is contagious.  When I came up with an idea to have a script with a Connie puppet, she was practically vibrating with excitement.  Well, once she was excited about it, there was no way I could back out, could I?

She’s also generous.  She was over at my house for a rehearsal yesterday and was eating a granola bar.  The first thing she asked as everyone came in was if they wanted some.  That willingness to share is, I think, one of the things that makes her such a good actress.  She’s not concerned with the size of the part but rather giving the most of her talents to the part she has.

I’m grateful to have met Dawn.  She’s one of those people that brightens the life of everyone around her.

Among the many things Dawn does, she has a podcast about wine called Screw It!