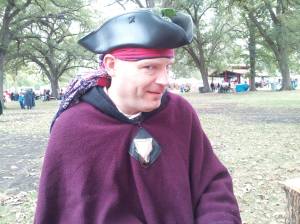 Chad and I crossed paths at just about the perfect time.  He has such a remarkable array of talents, it is hard to believe that he was available to join The Dregs when he did.

I first knew him as a producer and while my experience is limited, I can tell you he is something special at that job.  He just knows how to take good music and make it sound amazing.  In fact, that is a gift he has with just about anything.

When The Dregs are working on a song, he will typically be the one who notices that the song needs something extra and he’s an expert at figuring out what that extra thing should be.  It could be a missing note or it could be a missing shaker but he always makes good choices.

He just has good instincts when it comes to making things better.

As a band mate, Chad is one of the best talents you can hope for, both musically and comedically.  He’s also someone I trust to write music with because when I show up with some lyrics for a song, he can almost instantly grasp what I’m looking for, we can get the music written in an afternoon.  It’s kind of uncanny.

He’s very talented, yes, but he’s also just a lot of fun.  He and I have frequently ended up driving together to out of town performances and I love having him in my car.  We talk and laugh and argue and send obnoxious texts to the rest of our band and stop for coffee a lot.  The time passes more quickly when he is around.

Chad can be brutally honest and sometimes that can be hard to take.  But I appreciate that honesty because it cuts through the bullshit and addresses the problem.

Because he has shared his talent with me for so many years, I always consider myself lucky that we accidentally came together when we did.  My life and my art has been better because he is a part of both.  For these and so many other reasons, Chad rocks more.

Chad is the Music Director at Stevie Ray’s Comedy Cabaret in Chanhassen.  You can catch him there most every Friday and Saturday night.

One response to “Friend a Day – Chad Dutton”