Following in the footsteps of Florida Lawmakers, who are working on a similar bill, State Senator Dan Hall of Burnsville is the chief sponsor of a bill to ensure the phrase “In God We Trust” is posted in every Minnesota school. He argues that it is really about American History which explains why his bill also requires a poster with the phrase “E Pluribus Unum” posted Minnesota schools as well.

Now the odds are this bill doesn’t go very far. At least we can all hope it doesn’t.

What seems so puzzling to me is that lawmakers like Hall think kids are incapable of thinking about god on their own.  And even though he insists that the phrase “In God We Trust” is completely neutral since it isn’t “In Jesus We Trust” or “In Mohammed We Trust,” the fact that he’s a Chaplain and former Principal of a Christian school would suggest otherwise.

I am shocked, SHOCKED, to learn there is gambling going on in here!

Christian kids (and sure – any other non Christian kids who believe in a non-Christian god that is totally being represented by the sign) are 100% capable of thinking about god without a great big sign on their school wall. Such a sign represents a big old middle finger to any kids who don’t believe in god.

But seriously – who cares about them? They’re wrong anyway.

Trump Corner: Trump Admits he Made Shit up When Talking to Canadian Prime Minister Trudeau

I will note – this link is to Vice News, which is a pretty biased source. It is based on an article from the Washington Times, which is behind a pay wall so I opted for this one.  I have verified he actually said this shit.

You have to shake your head when the man who regularly calls CNN “fake news” because they sometimes report things he doesn’t like admits that he just made shit up when meeting with the leader of a foreign country.  Justin Trudeau, who I should point out is goddamn adorable (evidence below), met with Trump and Trump said that Canada has a trade deficit with the United States.

So Trudeau pointed out that Trump was incorrect and Trump later bragged that he just told Trudeau he was wrong even though he literally had no idea.

He bragged about it.

He was proud of the fact that he was bullshitting someone who knew more about trade than he did.

So the next time anyone uses the term “fake news” with you, just remind them that the most consistent source of such news is Donald Trump’s Twitter feed and if you want proof, just listen to what Donald Trump actually says when he thinks nobody is recording the conversation.

When several people explained to the poster that this meme was offensive as hell, they chose not to respond. One friend of theirs, however, came to their defense and bragged that she enjoyed posting terrible things about gays and lesbians because “they aren’t in the Bible.”

So hey, if you think this meme is awesome, you are in particularly horrible company.

So here we have Trump and Justin Trudeau.  Look at Trudeau! Isn’t he adorable? He’s trying to do that smug, smirky smile that Trump has mastered but he just can’t do it.  It’s like he’s the anti asshole.

So I mean pro-Trump meme. Whatever. Anti Trudeau meme. Also whatever because you are just jealous that our head of state resembles a large mouthed bass wearing a toupee.

But this meme is also, as I’m sure you’ve noted, sexist as fuck! It models Trudeau who, it should be noted from the article above, knows more about trade than Trump, as someone who can’t even be bothered to spread his legs like our testosterone charged bass-in-chief. Because he’s either been castrated or because he is secretly a woman.

The idea here being that women are inherently weaker than men and that Trudeau is weak because he’s not as much of a man because he lacks testicles.

Nothing about this “joke” is funny.   It’s just sexist bullshit.

On the other hand – Trudeau is adorable, right?  I mean, if he was in Star Wars, he’d be a Porg. You can just see the thought bubble that says “five more minutes with this buffoon and I can go back to having conversations with smart people.”

So I’m a bleeding heart liberal who hates industry and let me tell you why:

So when the Trump administration says that regulations meant to keep water clean are hurting industry, I could care less. They won’t stop polluting water unless it is painful to do so.

And even if you are an industry loving conservative, you should care about clean water.  I’m not just talking about a bunch of beer cans in the water. I’m talking about the water that you drink.

Maybe you don’t care about the fact that contaminated drinking water will, as with all such things, unfairly impact poor people because hey, you aren’t poor.

First of all, fuck you. You are an unfeeling monster.

But second, do you think it stops with poor people? You can just keep thinking that you’ll be fine because you can always afford bottled water but eventually, that becomes a problem because there just isn’t enough to go around.

Industry should want to keep water clean because who the fuck wants contaminated water? But they won’t do it because it’s too much work and it is too expensive.

The only way they will do anything is if it is more work and more expensive to keep polluting.

The Walk Up not Out Movement

Instead, let’s talk about the Walk Up not Out movement. Basically, some folks have suggested that these kids shouldn’t be walking out in protest, they should be walking up to the outcasts since one common thread in school shootings is most of the perpetrators were victims of bullying.

And I’m here to tell you that we should be doing everything possible to stop bullying.

However, outcasts are not always victims. Some of them are just introverts. I’ll grant that a lot of introverts are bullied but that doesn’t mean they need a bunch of kids trying to interrupt them when all they want to do is read a book in peace. 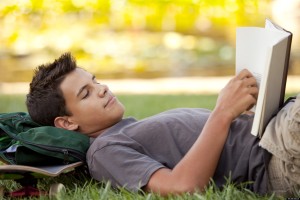 Let us note that this kid is almost certainly not the problem.

You know who these kids need to walk up to first?

The goddamned bullies. They need to tell the bullies that it isn’t OK. That they are going to stand in the way.

But even that doesn’t get to the core of the problem with this idea. And that is the word “not.”

Walk Up NOT Out.

Why can’t these kids do both? Why can’t they speak up about gun violence and work to eliminate bullying?

It is basically telling these kids who chose to walk out that they were wasting their time because they were doing it wrong.

You know what? They weren’t wasting their time. Even if nothing changes (and the NRA will work hard to ensure that is the case), they felt empowered. They felt like they had a voice. For what might have been the first time in their lives, they felt like they could make a difference.

A whole lot of kids could emerge from this being engaged. And yeah, some of them will be engaged to find a way to stop bullying.

So don’t tell me they wasted their time or they did it wrong. They did something. What the hell are you doing besides judging them?

Tags: Donald Trump, Justin Trudeau, Lying Sacks of Shit, Meme that Pissed Me Off, Religious Extremism, Shit that PIssed Me Off