I know this new Pope is cool and all but he seems to be swayed by Bill Donahue and the Catholic league in regards to Charlie Hebdo.  This week he has suggested that freedom of expression should be limited when it is directed at religion.  He stopped short of blaming the victim, as Donahue did, so full credit for avoiding that rhetorical pitfall.

If, however, you want to make a cartoon criticizing religion or, as I do, regularly criticize religion in a blog, that freedom should absolutely be allowed and welcomed. 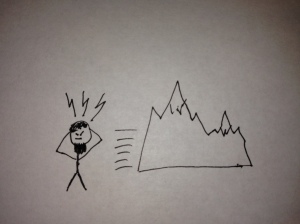 For instance, here is a drawing I made of Mohammed moving a mountain WITH HIS MIND!!!!

Religion is an institution.  Like politics. Nobody argues that we should stop making fun of politicians because we might offend someone who voted for them, do they?

Sorry, Francis.  Charlie Hebdo’s satire may not be your cup of tea but freedom of expression means they have as much right to do what they do as you have to criticize it.

END_OF_DOCUMENT_TOKEN_TO_BE_REPLACED

While it seems probable that Trayvon Martin did attack Zimmerman, it also seems clear that Zimmerman would not have been in a position to be attacked if he’d followed directions and stayed in his car.  He didn’t and a teenaged boy is dead.

In the end, nobody learned anything.  Zimmerman feels like his actions have been vindicated.  In fact, he feels like killing Martin was part of God’s plan. A belief that won’t be shaken given the verdict. Trayvon Martin can learn nothing ever again because he’s still dead.

Or – since it was all part of god’s plan – maybe he’s burning in hell and learning a lot. Too bad it won’t do him any good. Ha ha!

Is Zimmerman guilty of murder?  Apparently not.  I still believe that what he did was wrong.  And it exposed something ugly about our country that a lot of us would rather ignore. Like the fact Zimmerman can go free while a black woman can spend 20 years in jail for firing two warning shots so her abusive husband would stay away from her.

Sadly enough, after the uproar about this verdict dies down, we’ll just go back to ignoring it.

END_OF_DOCUMENT_TOKEN_TO_BE_REPLACED

OK, those National Park Rangers just don’t want to let tourists have any fun!  I mean, why are we going to Death Valley National Park if not to engage in science experiments that…don’t work?

Turns out that you can’t just fry an egg on the pavement.  It isn’t quite that hot.  You could do it if you have a frying pan and the video that is inspiring all of this failed egg frying even mentions that it doesn’t work without one but facts are unimportant when you are trying to do science!

Check out the SCIENCE!

Cleaning up after yourself is also, apparently, unimportant.  Better to just leave eggshells and unfried eggs all over the place because you were too stupid to follow directions.

The message here is clear: don’t tell people how to do cool science experiments because they will probably just fuck it up.

END_OF_DOCUMENT_TOKEN_TO_BE_REPLACED

On The differences between Satire and Bigotry

Yesterday, I posted a satirical post about the Pope.  I was happy with it.  I thought it was pretty silly.  I was especially pleased when I called him “Benedict the Cumberbatch.”  Comedy genius, I tell ya!

I knew that it might upset a few Catholics if they read it and that was totally OK.  That’s what happens when you write a blog post that is critical of the Papacy – even if it is primarily written as a joke.  If someone doesn’t like the joke, the intent is not relevant.

Well, a friend of mine shared the post and then a friend of hers got pretty upset about it and we had a conversation.  He kept saying he didn’t want to have a conversation but he actions suggested otherwise.  I guess he was obsessed with someone being wrong on the internet.  I get that.  I’ve been there.

No sarcasm. I’ve been this guy. Thanks, XKCD!